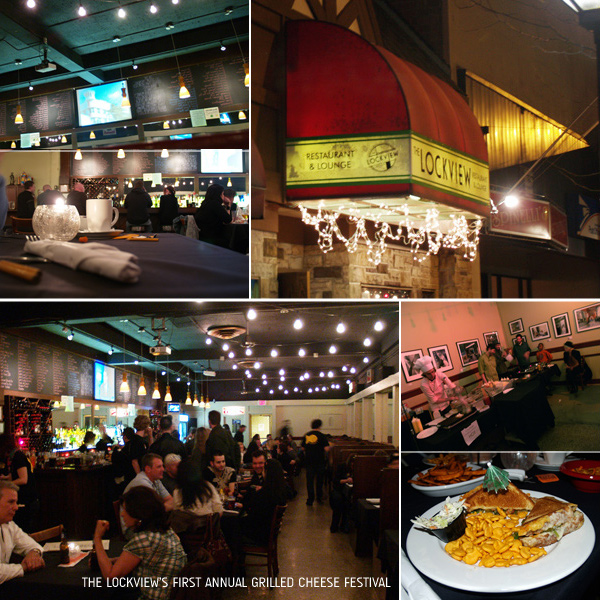 This past Saturday evening, I attended The Lockview’s First Annual Grilled Cheese Festival with the sous chef and sous chef’s husband. I had heard of The Lockview but never visited nor had I really investigated their menu (PDF). All I knew was that they loved grilled cheese as much as I do so once I was alerted to their First Annual Grilled Cheese Festival, I knew I had to go. Reservations were made and plans were set.

I am not sure what I expected, but oddly enough, the restaurant’s atmosphere was completely different from the picture I had in my head. Somewhere along the lines I missed the fact that it was a restaurant and bar. That little nugget of information would have definitely helped, but in the end, was not a big deal. When we walked in, the place was buzzing with music playing in the background. Everyone seemed like they were having a great time, no matter if they were eating, drinking or both!

Once we were seated, we were informed by our waiter that we could order off the menu or create our own grilled cheese sandwich. Create our sandwich you say? He did not have to ask me twice. We were given the following card and told to go to town. Please make note that Fruit Loops were in fact a choice. I was tempted to be daring and choose them but instead I wussed out. ($6 for a made-to-order grilled cheese? Definitely a great price!)

My father was able to create his sandwich in just a few minutes, with only some hesitation. Me, being very indecisive and wanting to make sure I chose the perfect combination of ingredients, took probably 20 minutes. Ridiculous, I know, but I am glad I took the time. The sandwich came out amazingly.

Havarti dill has never been used by me in a sandwich nor do I think I have ever even tried it. Perfect choice. I like a kick but the father does not so I tend to stay away from jalapenos when it comes to Sunday Dinners. Since I would be the only one eating this sandwich, I made sure to give it a kick. I had never thought about including pickles in a grilled cheese and that they would work well with the jalapenos, so I chose them as my second ingredient. I already had two flavorful and powerful ingredients, jalapenos & pickles, so I went with something simple: spinach. The spread was the easy part as my dad does not like pesto and I do, so the red pepper pesto was my choice. Finally, I had to choose the bread. At this point, the waiter had already come and gone twice and was waiting on me to finish my sandwich creation. I was under pressure and had to choose so since I had a lot of flavors inside the sandwich I went with a simple bread: Texas Toast.

After ordering our personalized grilled cheese sandwiches, the man above, I believe, cooked each individual creation while the people next to him spun records. It was a great idea that really enhanced the atmosphere.

This was my personal grilled cheese sandwich, made to order, complete with Goldfish. All sandwiches, whether it be the Grilled Cheese Festival or a normal day, come with Goldfish. The addition of the crunchy, cheesy Goldfish was a great idea that I may end up stealing, I mean borrowing, for my future restaurant. Of course, the minute I saw that The Lockview served sweet potato fries for only a $1.50 more, I knew I had to order some. They were oh so yummy!

The sandwich was awesome, even with my hesitation when it came to choosing the ingredients. The Texas toast was buttered generously, the cheese was ooey gooey (a technical term) and the kick was there but not overpowering. If this sandwich was a part of my Sunday Dinners series, it would have easily garnered an “A” rating.

The only downside of the evening was that we purchased 3 raffle tickets, stayed for 3 drawings and won nothing. I was hoping to win a Lockview t-shirt and/or gift certificate, but that was not the case. It still wasn’t a lost cause, considering 50% of the proceeds went to the Juvenile Diabetes Research Foundation.

To top off the night, I spoke, briefly, with the owner of The Lockview. How could I leave a Grilled Cheese Festival without mentioning this blog? Well, my shyness almost did get in the way but thanks to the sous chef, we all were able to speak. Once I hit publish on this entry, I will be emailing him with a link directly to this entry.

Overall, this evening was a rousing success. A great sandwich with great atmosphere and great company. What could be better? Although Akron is about 30 minutes or so from home, I hope to return to The Lockview many times in the future so I can try many of their standard grilled cheese recipes that are on the menu 24×7.