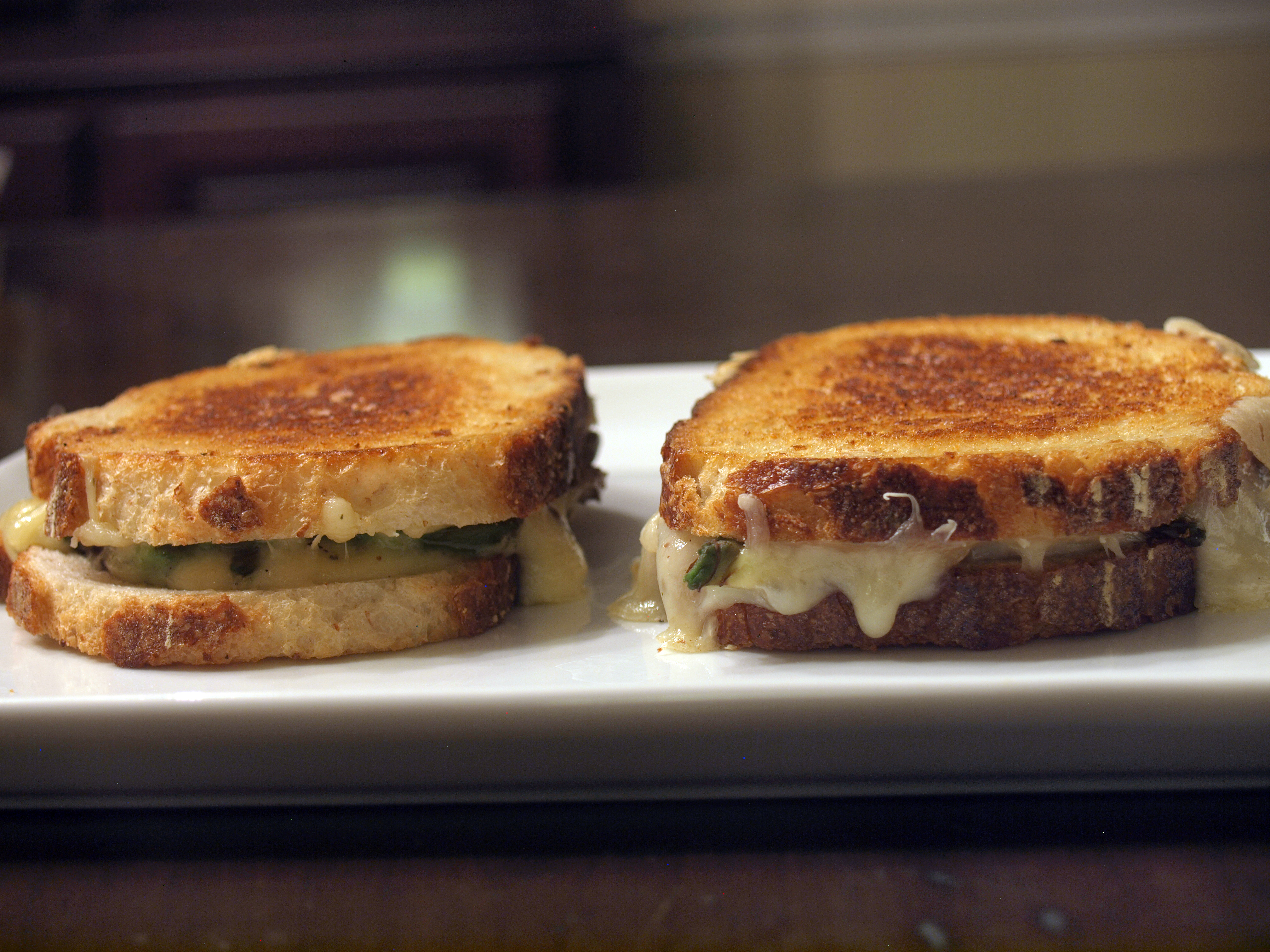 If you hadn’t heard by now, October was American Cheese Month. Unfortunately, I was a little late to the party, my life was all over the place, but it doesn’t mean I didn’t celebrate. And celebrate I did. Thanks to Whole Foods, I was able to choose from their featured American cheeses (and the ingredients) to make a grilled cheese of my creation. For free. Pretty cool, yes? I decided to go all out and instead of simply making one grilled cheese, and having to choose between so many great cheeses, I made two, with two different American cheeses.

This cow’s milk cheese has a delicate texture studded with a mild flavor and notes of rosemary. It makes a fantastic table cheese and a great melting cheese for recipes. A Whole Foods Market exclusive!

Thanks to the very nice cheesemonger at my local Whole Foods, who probably thinks I’m crazy, I learned that Asiago is the cilantro of the cheese world: people either love it or hate it. I had no idea that Asiago was so controversial. Granted, I have used it in a few grilled cheeses, but never once did I know it was so divisive. Nor, do I truly have a strong opinion regarding Asiago. I was intrigued.

After trying this particular Asiago both by itself and in a grilled cheese, I have come to the conclusion that I enjoy Asiago cheese. Saxon Creamery’s Asiago has a great creamy texture, a hint of rosemary and a great overall mild flavor. Yes, regardless of if you like Asiago or not, if you don’t like rosemary, you won’t enjoy this cheese. But, to everyone else, I would highly recommend Saxon Creamery’s Asiago. The flavors won’t hit you over the head. There is just something about it that will keep you coming back, regardless of if it is melted or not. Plus, it is made in Cleveland, Wisconsin, so how could I not like it?! (Remember, I am from Cleveland, Ohio.)

It is a young cheese with delicate, smooth open texture, presenting a creamy milk flavor with a slight tang.

Asiago Fresca is handcrafted in the vat, gently pressed, and placed in brine tanks. Over 4-6 weeks, the cheese wheels are rotated through three different aging cellars to develop its special flavors. (Saxon Creamery)

This cow’s milk cheese has a distinct aroma, with a velvety texture and mild nutty flavor that has pleasantly sharp tastes from distinct peppercorns. A Whole Foods Market exclusive!

When I thought I was going to only buy one cheese, I asked the Whole Foods cheesmonger which of these two cheeses were “weirder.” I felt like being daring. She said the Raclette, so I was very excited. I have used Raclette in my cookbook as well as with my “Partyclette” but that is it.

The 5 Peppercorn Raclette has a very similar creamery texture to Saxon’s Asiago, which is probably why I enjoyed it as well. I can’t resist a smooth and creamy cheese. (Or maybe, I simply can’t resist trying new cheeses.) The flavor, however, is different due to the presence of the peppercorns. They give the Raclette a nice little bite/sharpness and a unique overall flavor.

Raclette is a classic Swiss-style cheese with melting qualities that allow it to be melted in small pans and practically poured over accompaniments, which traditionally include fingerling potatoes, pearl onions and cornichons (small pickles). It also is served with dry-cured meats, sliced peppers, tomatoes and mushrooms. Also try it with apple slices and grapes.

Raclettee is derived from the French verb racler, which means “to scrape.” It’s been said that shepherds in Europe carried the earliest wheels of raclette with them and would heat up hunks of it over an open fire, scraping off the melted portion to enjoy with meals. (NJ.com)

Recently, I was at a local grocery store, Heinen’s, where they were sampling avocado. I found it odd, but since I love avocado, I went for it. It turns out, the avocado was seasoned with salt, pepper and fresh lemon juice. It was delicious.

Since I wanted to use the same ingredient for both sandwiches/cheeses, I decided to go the simple route and use seasoned avocado.

I have never purchased a bread from Whole Foods that I didn’t like. That is why this time, I wanted to try a new, different variety. The Farm Loaf is not made by Whole Food but yet Meditera Bakehouse.

Imagine sitting around a French farm house waiting for dinner: this would be the bread the family would serve. A white wheat mix made with a sour starter, very similar to pain au levain. In France. Its crust is crisp, its flavor subtle and never tiring. It’s great for sandwiches, toast or plain and has a beautiful honeycombed texture.

The crust is extremely crunchy while the interior is soft. The flavor, in simpler terms and my opinion, is a mix of Italian and sourdough leading to a delicious bread.

Thanks to Whole Foods, I was able to enjoy two delicious, American cheeses. Saxon Creamery’s Asiago with Rosemary as well as EMMI Roth USA’s Five Peppercorn Raclette were two cheeses I had never heard of before. However, after trying them, and devouring them, I will never forget them. They were unique and interesting while not intimidating. If you can find these cheeses near you, I would most definitely recommend you try them, They were yummy. These two cheeses are examples of true American cheeses, not, the orange, processed squares that are “cheese product.”

The two grilled cheese sandwiches were as delicious as the cheeses contained within. The seasoned avocado added great texture while not overpowering the flavors of the unique American cheeses. With each bite, flavor oozed out of the sandwiches, whether I was tasting the uniqueness of the cheese or, at times, the fresh avocado.