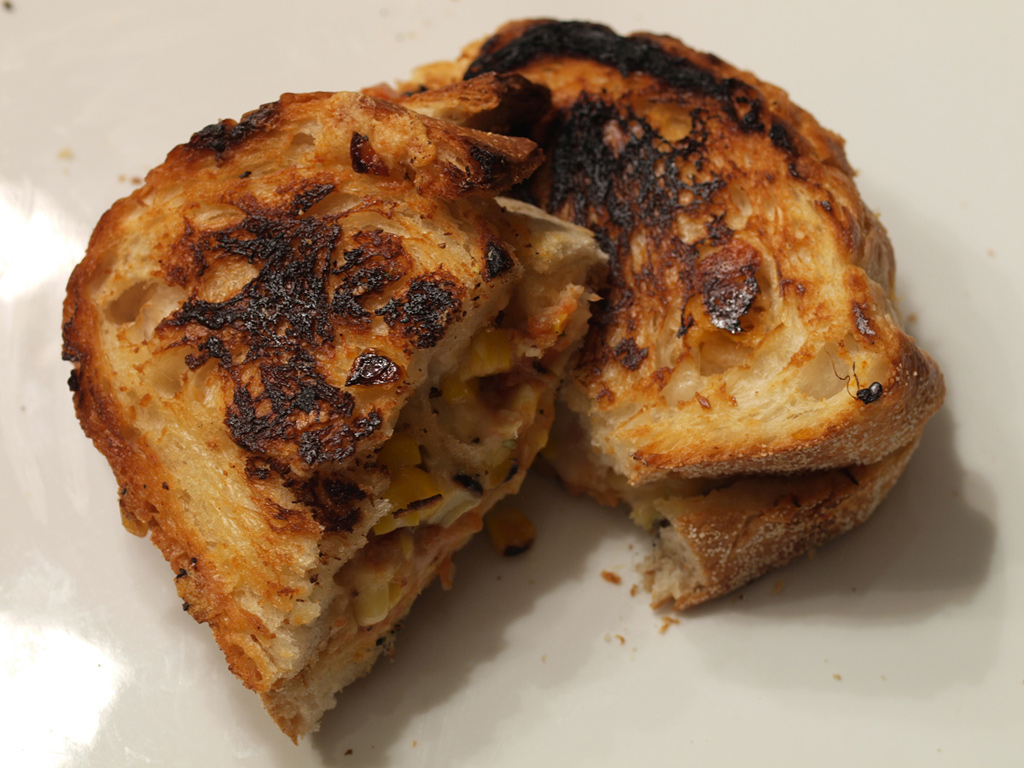 I had hoped to create this mango/watercress/hummus grilled cheese for last Sunday, when my father told me he was not a fan of hummus. I was short on time and forced to come up with a new grilled cheese. The local Whole Foods just started having Sunday brunch, and since I was headed into work at 11, the folks and I decided to go. While there, I was trying to devise a plan for that evening’s grilled cheese but my mind was on getting to work on time. With some more thinking (and time), this is what I came up with.

The first and only imported Muenster in America. Made from only the purest milk in the European Union and aged 60 days for a rich, creamy taste. (Finlandia Cheese)

Muenster is a smooth textured cheese with an orange rind and a white interior. This washed-rind cheese is made from cows’ milk. The orange color is derived from vegetable coloring. It usually has a very mild flavor and smooth, soft texture. In some cases, when properly aged, it can develop a strong flavor with a pungent aroma. This cheese is commonly served as an appetizer. Because it melts well, it is also often used in dishes such as grilled cheese sandwiches, tuna melts, quesadillas and cheeseburgers. (Wikipedia)

The sous chef purchased Muenster since it was on sale and because it was from Finland, as opposed to the USA, where Muenster usually originates. I was hesitant to use it because I wanted to try something different and a little more unique. (Honestly, I was being a bit of a cheese snob.) However, I am glad I did. This variety of Muenster was buttery, creamy and definitely mild. It worked perfectly in the grilled cheese and would even be great sliced and on crackers.

Santa Theresa is a young, mild Pecorino Sardo Dolce cheese from Italy that’s treasured for its delicate flavor. It s only aged 30-40 days, so you can taste the gentle hints of green grasses and herbs that the sheep pastured on, along with lemony aromas and subtle hints of thyme. Smooth, creamy texture and sweet flavor make this a great choice for antipasto, baked pasta dishes and on salads. Milk: Sheep. Origin: Italy. Texture: Creamy. (Wegmans.com)

The only adjective that I believe is missing from the above description is nutty. That was the first flavor I tasted when sampling this particular Santa Teresa cheese, purchased from Whole Foods. I stumbled upon this particular cheese and then was convinced by Jason the cheesemonger that it would be a great choice for this particular grilled cheese. He was correct and I was wise in choosing this as opposed to Smoked Gouda.

For brunch, our local Whole Foods serves a breakfast burrito with a side of chipotle salsa. While eating the burrito, I realized that my favorite part was in fact the salsa (although the burrito was pretty good).

At that point, I thought, why not use the chipotle salsa in a grilled cheese sandwich? Perfect idea. However, that was the only idea I had. (A headache was slowly growing.) I didn’t know what to cheese to use or bread. That would have to wait until after work and I was a little more calm.

I returned to Whole Foods after work for some more inspiration, hoping to find additional ingredients, bread and cheese. While perusing the produce section, a light bulb appeared over my head: why not roast corn and include it with the salsa, making somewhat of a roasted corn chipotle salsa?

My father had already purchased corn from a local farmer’s market so we were set. We just needed to boil the corn and then cook it on the grill. With the grill already on, it only made sense to also grill the entire grilled cheese.

The final piece of the puzzle was the bread. While I was unable to think at brunch, Whole Foods had a variety of breads to choose from. However, after work, when I could think, they were out of most everything. Thankfully, upon the sous chef calling, Whole Foods volunteered to bake an Italian bread that was already prepared for the following morning.