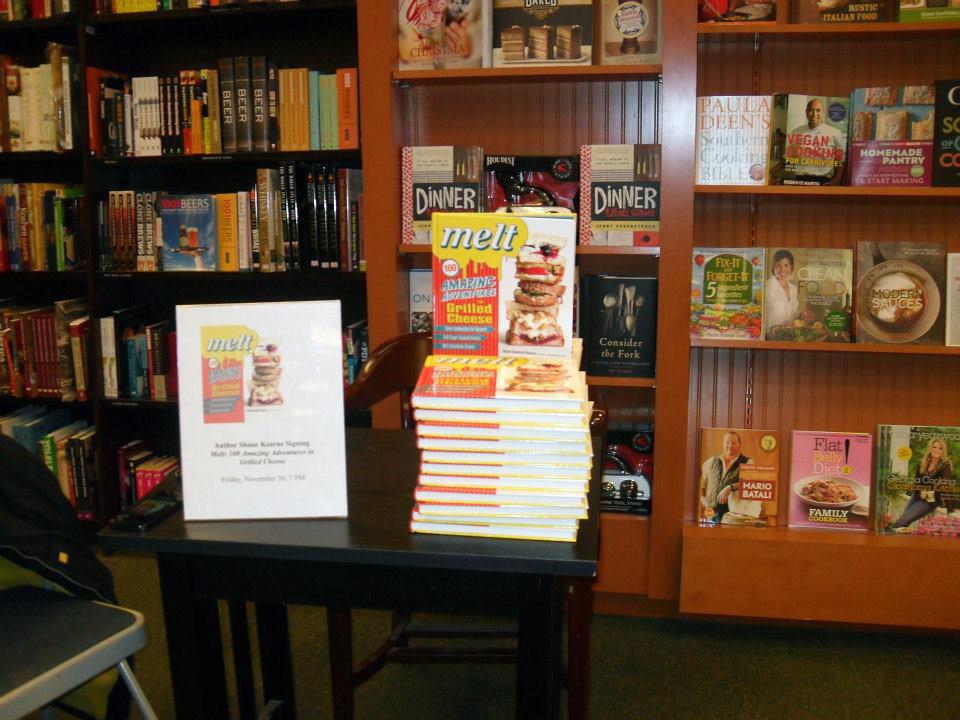 Just a few days ago, November 30, I held my first book signing in support of my first grilled cheese cookbook, Melt: 100 Amazing Adventures in Grilled Cheese. I was planning to write a recap, when I started and unfortunately, got nowhere. Thankfully though, my new and wonderful girlfriend, Sarah, wrote-up a great recap on her blog. And trust me, she did a MUCH better job than I could have. To make it easy on you, I have gone ahead and copied her guest report below. However, if you want to see any pictures, you have to go to Sarah’s most wonderful blog or GrilledShane’s Facebook page. Enjoy…

Instead of the random article features I like to do with this blog, I am writing this entry as a special “guest-correspondent“ coverage of the latest development in the GrilledShane world. On Friday, November 30th, I had the honor to join GrilledShane at the VERY FIRST signing of his book. Melt: 100 Amazing Adventures in Grilled Cheese. If you haven’t checked it out yet, I strongly urge you to! I’ve gladly volunteered to Shane to write up my experiences and observations of the evening. I also have some photos I took as well, though I apologize if you have seen some of these before, as Shane has already “stolen” some of my pictures and posted them to his Facebook page (don’t forget to take a look there and like the page if you haven’t already!).

The evening started with us (Shane, his parents, and myself) driving over to the Eton Chagrin Boulevard Barnes & Noble in Woodmere, near Cleveland. As this area is GrilledShane’s home turf, it made sense to bring the first signing to where it all began. I had arrived to the Cleveland area the day before from my home in South Carolina, adding to what was an impressive number of people who came from near and far to get their own signed copy of Melt.

We arrived ready for the 7PM event to begin. The store manager greeted and directed us to the cooking section, where she excellently decided to set up his signing area. Table, chair, pens, bottled water, and a pile of books ready to be signed. The manager also informed us that a local school was having an event, and elsewhere in the store, three children’s authors were also holding a signing, so there should be a lot of people there. She also made the effort to announce over the store’s intercom every 20 minutes or so about Shane and the other authors presence in the store.

As soon as the first announcement was made, a sudden rush of people approached Shane’s table, comprising of family and friends making a prompt 7 o’ clock appearance and others in the store who were intrigued and interested in learning more about the wonders of grilled cheese! Over the next couple hours, a steady stream of GrilledShane fans and soon-to-be fans came and got their signed books for themselves and others (hey, it’s the PERFECT holiday gift!) . At the end of the night, all but  a few of the store’s stock of Melt were sold, and those remaining few were signed by Shane and left for sale for those who could not make it to the event. (Calls to the Barnes and Noble a few days later informed us those remaining copies were all sold too- time to reorder!)

One of the most amazing things about this event was the number of people who came out to support GrilledShane and the distances they came for the occasion. In addition to myself coming up from South Carolina, friends and family came from near and far: some people from Columbus and Cincinnati drove straight from work to make the event, and Shane’s aunt and uncle drove in from Toledo just for the evening! One little girl who is also an aspiring chef (apparently she cooked most of her family’s Thanksgiving dinner!) was really excited to meet GrilledShane and was asking him all these questions about how he got into cooking and what his goals were.

Something that all could agree on was the major success of GrilledShane’s book signing, and hopefully the near future brings more opportunities for book signings and grilled cheese fun! Where will the next GrilledShane signing be? Just wait and see!

See book signing photos and much more fun over at Sarah’s most wonderful blog.

Filed Under: my take
The First Melt: 100 Amazing Adventures in Grilled Cheese Contest
A GrilledShane Year In Review + Contest