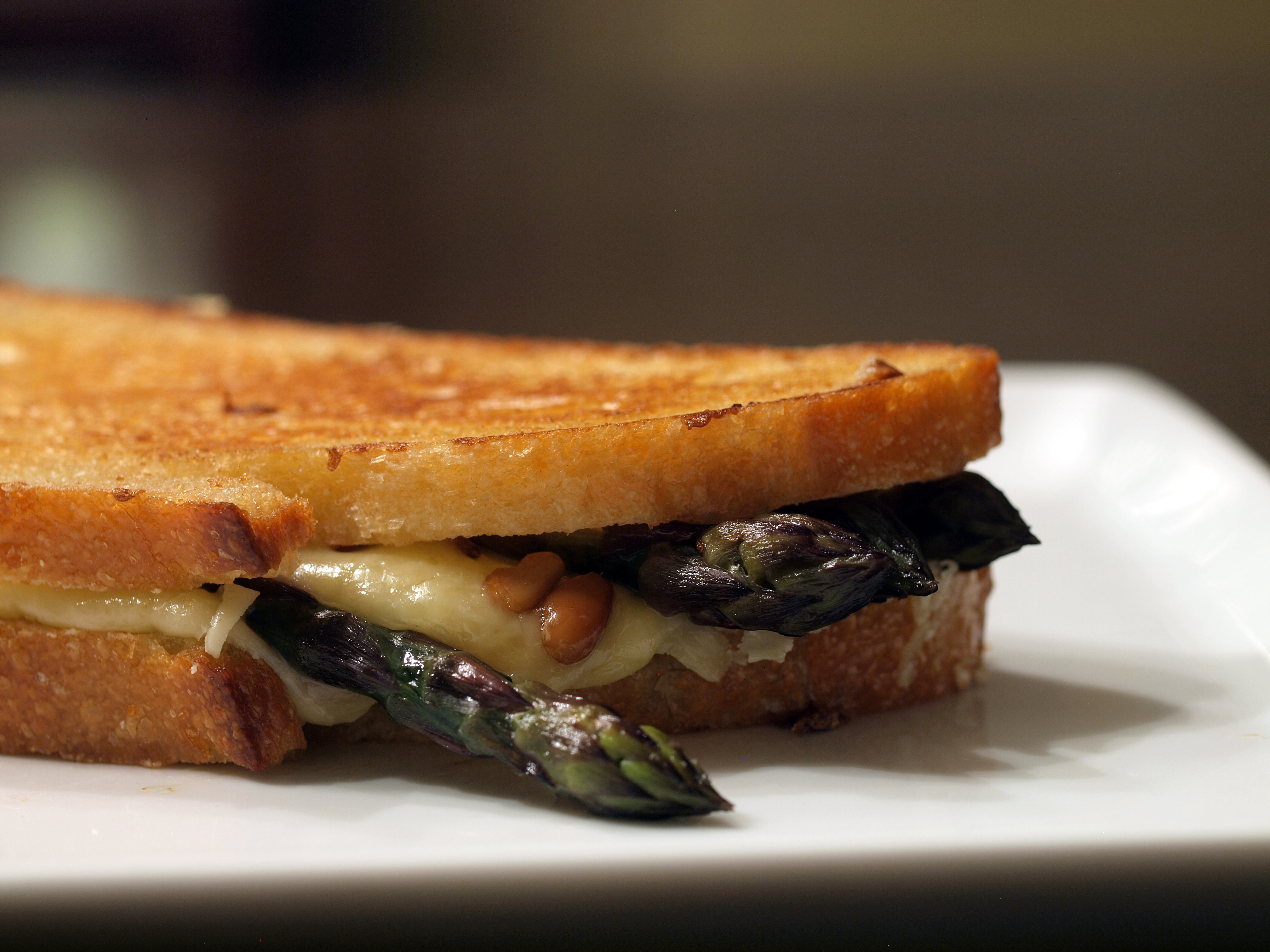 Recently, I received an email from Whole Foods PR department with the subject of “A cheese worthy of a prince – Royal Addition One-Year-Old Cheddar at Whole Foods Market”. As usual, I just thought it was spam/a come on and nothing really worth reading. Out of pure curiosity, I skimmed the email and that is when I came across this paragraph:

If you are interested in sampling this cheese, I am happy to send you a gift card to purchase on your own or set it aside with the cheesemonger at your local Whole Foods Market.

No, this email was not spam. Whole Foods Corporate sent ME a cheese related email. They wanted to give ME free cheese. Being the free cheese whore that I have become, how could I say no? Plus, the story behind the cheese, described below, is pretty unique/interesting. I couldn’t say no. I didn’t say no.

I was rewarded with a $50 Whole Foods e-gift card to not only purchase the cheese ($9.99/lb) but also any ingredients that I needed for this Royal Cheddar Grilled Cheese. Next step? Visit Whole Foods to shop and concoct an idea for this grilled cheese.

Last year when their son Prince George was born, people all over the world celebrated, including cheese lovers at Whole Foods Market. That day, Whole Foods Market collaborated with cheesemakers to create a one-year aged cheddar to commemorate the celebration and it’s being released this month in honor of his first birthday!

Enjoy this specially made cheese honoring the young British royal with the Westminster Royal Addition One-Year-Old Cheddar, available exclusively at Whole Foods Market. This cheddar was made on a farm in Somerset, England by the Barber family – one of the oldest cheddar makers in the world – on July 22, 2013 and is aged for 12 months. It has a savory flavor and creamy texture. (Whole Foods / Westminster)

Yes, I was as sick as the next guy with all the hoopla regarding the “Royal Wedding” and then “Baby/Prince Watch.” However, I didn’t know that there was some cheese related information tied to the birth of Prince George. That kind of makes all of the coverage worth it. Kind of.

I love Cheddar cheese. There really hasn’t been a Cheddar that I have tried that I didn’t like. Yes, I prefer the really sharp, aged Cheddars that have a good bite to them but if you stick a younger Cheddar in front of me, I won’t turn it down. Since this particular Cheddar, Westminster Royal Addition One-Year-Old Cheddar, was only aged one year it didn’t have a huge bite to it but that isnt’t to say there was no bite. It was creamy and smooth in texture with that little bit of sharpness showing its head here and there. Once the Cheddar was shredded, I noticed myself munching on it as I prepped the other ingredients. It was delicious. And addicting.

When thinking about this sandwich, knowing the fact that the Cheddar was made specifically to honor Prince George, I kept returning to England and royalty. It only seemed natural. With the assistance of the Sous Chef, we walked through Whole Foods trying to find the perfect ingredients. Purple is most often associated with royalty so when we walked by the purple asparagus, the Sous Chef made the suggestion and I went with it.

Purple asparagus is a similar in appearance and flavor to both white and green varieties as its original cultivar came from green asparagus. Its differentiated by its violet hued stems and conical crowned tips, however its feathery foliage is still green. Its attractive violet coloring is only skin deep as its flesh is pale green to creamy white. It is inherently less fibrous thus more tender than other asparagus types. Also, its preferred sweetness is due to its twenty percent higher sugar content than other asparagus varieties. Cooked purple asparagus develops flavoral notes of artichoke, barley and almonds. (Specialty Produce)

Typically, I am not an asparagus person. I don’t seek it out at the grocery store nor does it excite me when I see it on a restaurant menu. However, it is a unique ingredient with a unique texture that seemed perfect for this grilled cheese, beyond the fact that it is purple.

When one has a baby, the family tends to celebrate. Some people choose to celebrate with wine or beer. Since this grilled cheese is essentially celebrating the birth of Prince George of England, I thought what better way to celebrate than with an English beer? I could have chosen wine, yes, but with the amount of pubs in England, it only made sense to go with beer.

Granted, I know I thoroughly enjoy beer, but, in the grand scheme of things, I know very little about the actual beverage. That did not help me when I was trying to choose between the only three beers Whole Foods had that were specifically from over the pond. I’ve heard of Newcastle Brown Ale but I wanted something different. Thankfully, the beer guy at Whole Foods allowed me to break up a pack and for no reason other than I had never heard of it, I chose Boddingtons Pub Ale. Sure, I don’t know that I would buy it again simply to drink, it almost tasted watered down, but since I was cooking with it and it tasted like a standard beer, it was a win.

I love sourdough bread and haven’t used it in a grilled cheese in awhile so I chose it for this grilled cheese. I thought it would add great flavor without overpowering the ingredients while also providing a crunchy texture.

putting it all together

To start, per the Sous Chef’s advice, we “steamed” the purple asparagus in the microwave simply to soften them prior to sautéing. Once they were soft, I put them in a pan on medium heat and instead of using butter or even oil, I added some of the Pub Ale. I sautéed the asparagus for about 10 minutes, giving it time to soak in the beer, adding more here and there. I flipped the asparagus every so often.

Once the asparagus was done sautéing, I put them aside and made sure not to wipe down the pan. Instead, I added some more beer, sweet butter and melted it down together. I was essentially making beer butter that used in place of normal butter on the outside (and inside) of the bread/sandwich. Since I didn’t know how much I actually needed, I kept adding beer and butter until the taste was where I wanted it to be and I had made enough.

Thanks to the generosity of Whole Foods, I was able to try a “royal cheese” and in turn create a “Royal Cheddar” Grilled Cheese. This grilled cheese may seem like it includes a bunch of weird and random parts, beer, asparagus and pine nuts, but oddly enough, they all truly come together to create a delicious and multi-textured sandwich. By brushing the outside of the bread with the homemade beer butter, not only does the bread become crunchy, but it allows for you to get that hint of beer flavor before even tasting the interior of the grilled cheese. The tender asparagus contrasted with the crunch of the sourdough bread flawlessly. When I could taste the pine nuts, they added another dimension of flavor and texture, but unfortunately, most of the time they got lost and probably weren’t needed (or I needed more). The soft and creamy Westminster Royal Addition One-Year-Old Cheddar completed this “Royal Cheddar” Grilled Cheese perfectly. Even as I created this sandwich, from start to finish, I wasn’t 100% sure the pieces and parts would truly come together as I hoped. Thankfully though, after just a couple of bites, I knew this grilled cheese was a Royal Winner.