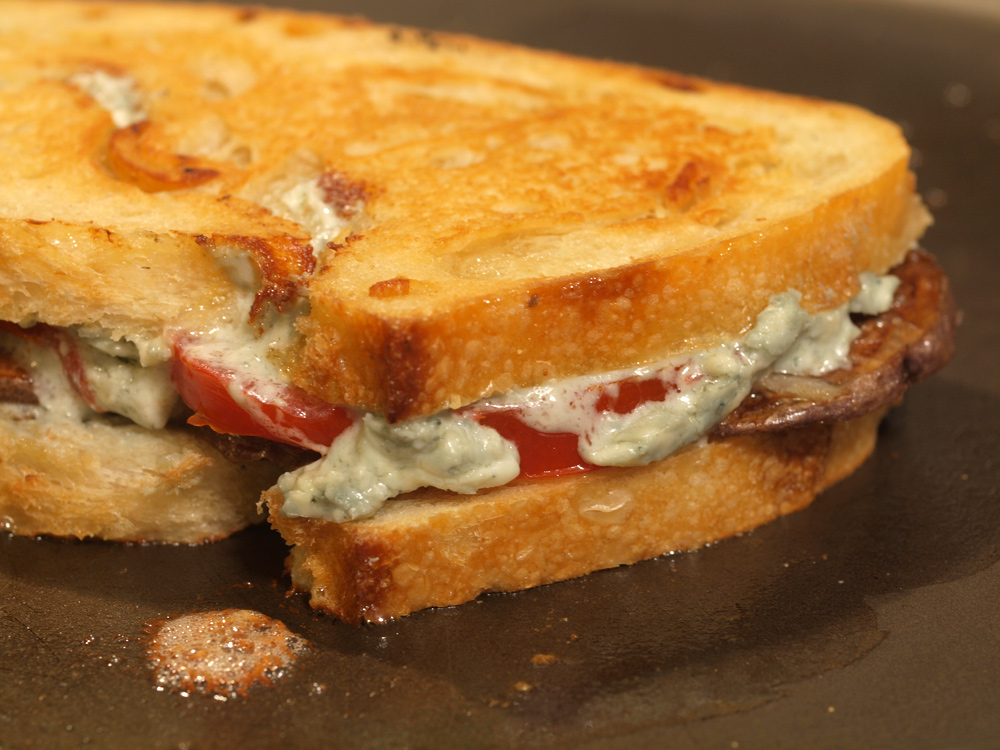 I begin this entry with a riddle: Name a blue food that is not a blueberry, blue M&M or blue corn tortilla chip…

Did I give you enough time? Need some more? Think of any? Yeah, didn’t think so. Blue foods are a rarity. Unfortunately for the USA, it is included in our awesome flag. For this grilled cheese, I wanted to create a “red, white and blue” grilled cheese sandwich in honor of the 4th of July. Previously, I created the Patriotic Grilled Cheese, consisting of red peppers, fresh Mozzarella and blueberries, for Memorial Day, but that was a simple and obvious grilled cheese. I wanted to push the envelope and try something new with this Red, White & Blue Grilled Cheese. The sous chef and I had multiple employees of Heinen’s, a local grocery store, wracking their brain, trying to think of blue foods. I was trying to find blue corn meal to make blue bread, but that thought quickly failed. (Is there such a thing as blue corn meal?) Blue corn tortilla chips were definitely a good option except I have already used tortilla chips twice. I wanted something different. I wanted purple potatoes for this grilled cheese.

In my experience, people either love or hate blue cheese, there really isn’t any in between. When I was younger, I was freaked out by blue cheese, but over time as my tastes matured and expanded, I found myself loving blue cheese. Yes, it can be strong, but it can also be delicious when used correctly.

The process of making blue cheese follows the same six standard steps used to make most cheeses. So where do those blue/green streaks come from? The unique look of blue cheese is a result of a specific type of mold added during the cheesemaking process and an additional step in the ageing process called “needling”. The molds added to blue cheese are derived from the genus Penicillium. The most widely used molds in blue-veined cheeses are Penicillium Roqueforti and Penicillium Glaucum. These fungi are found commonly in nature and were “discovered” by cheesemakers ageing their cheeses in damp, cool caves. (About.com)

The particular variety that I used is Danish:

Danish Blue (also known as Danablu) is a strong, blue-veined cheese. This semi-soft creamery cheese is typically drum or block shaped and has a white to yellowish, slightly moist, edible rind. Made from cow’s milk, it has a fat content of 25–30% (50–60% in dry matter) and is aged for eight to twelve weeks. … Danish Blue was invented early in the 20th century by a Danish cheese maker named Marius Boel with the intention of emulating a Roquefort style cheese. Danish Blue has a milder flavour characterised by a sharp, salty taste. (Wikipedia)

With the blue cheese/cream cheese mixture, I could technically cross white and blue off the list. However, one of the Heinen’s employees thought of purple potatoes (blue?) and I was intrigued. I have not messed with potatoes much, especially not purple potatoes, so I thought why not? (Learn more about purple potatoes.)

But how would I prepare these awesome purple potatoes? The sous chef cut these and fried them like potato chips.

I added a little salt to them right after taking them out and they were fantastic. However, it was a good amount of time prior to us actually using these chips in the grilled cheese, leading them to become soggy. It would be my suggestion to get everything else ready and then right before composing your grilled cheese, I would recommend cooking the purple potato chips. This would hopefully cut down on the sogginess of the chips and increase the crunchiness in the grilled cheese.

The cream cheese is white, but I wanted a separate white item so I chose white onion. They are yummy after all so why not? Since we had just fried the chips, we went ahead and flash fried the onions. Once they were done, you could smell their awesome flavor.

When I mention garlic bread, you probably think of the following: 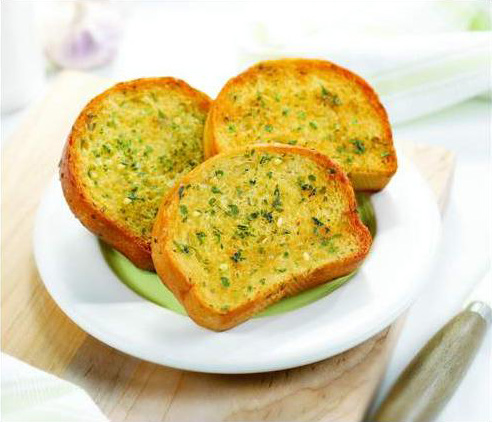 Bread with roasted garlic flavor and even a few pieces of actual garlic. The flavor was not overpowering and actually quite delicious. Remember though, I did not use typical garlic bread.

As you can see in the above photos, I spread the blue cheese/cream cheese mixture on both slices of bread. That was a mistake. The blue cheese overpowered everything, including the potato chips (purple potatoes), onion and tomatoes. It was not bad in the least, I do enjoy me some blue cheese, but the other ingredients became useless. For the second half of the grilled cheese, I did scrape off some of the extra blue cheese and the grilled cheese was better. However, as soon as I was complete with sandwich #1, I cooked grilled cheese #2 in which I only spread the mixture on one slice of bread. That made the sandwich infinitely better. Yes, it still had its downfalls like mushy purple potato chips, but overall, the various flavors (and textures) were actually present. I am not sure how different I would make this grilled cheese for a third time, but some tweaking would definitely make it even better. If anyone has any suggestions, please leave them in the comments. Overall, a good effort.

Everyone out there, please have a safe and enjoyable 4th of July!