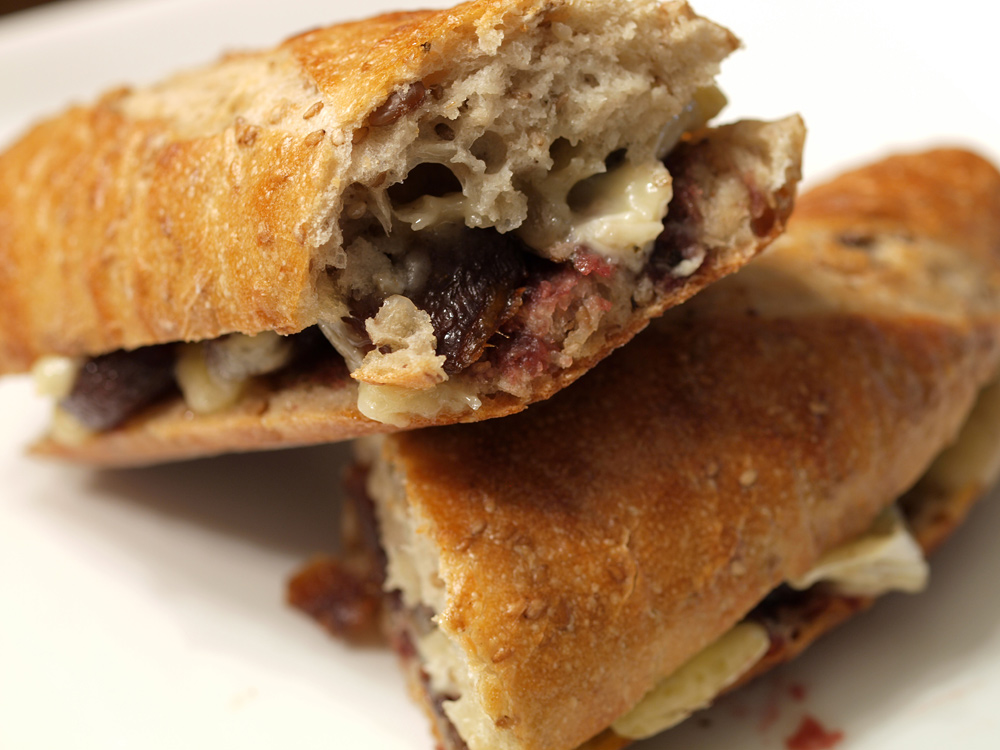 I have been a fan of POM (pomegranate) juice for awhile but only recently began drinking it again. After purchasing a few large bottles of their standard pomegranate juice, and then drinking it, the thought crossed my mind to somehow use said juice in a grilled cheese sandwich. It was a very incomplete idea with nothing behind it so I took to Facebook and Twitter for some inspiration.

It is becoming more and more difficult to fill this section with useful information once I have already written about a certain cheese. In this case, I have made a few grilled cheese sandwiches with Brie, with most (if not all), containing some sort of fruit. And most of said sandwiches have turned out pretty well so I would definitely recommend creating a grilled cheese sandwich with brie + fruit!

Anyway, here is a fun fact about Brie:

According to legend, Charlemagne had his first taste of Brie in 774 and instantly fell in love with it. Since then, the velvety cheese has been a favorite of noblemen throughout the world. It’s been said that during the French Revolution, Louis XVI’s last wish was for a final taste of Brie. And in 1815, the Congress of Vienna officially recognized Brie as a “royal cheese” when 30 European ambassadors cast votes in its favor. Brie became eternally known as “roi de fromages” (king of cheeses) and “fromages des rois” (cheese of kings). (ILoveCheese.co.uk)

Thankfully, waiting on the other side was a good friend, TMGastronaut. His suggestion was as follows:

@grilledshane You should make a reduction from pomegranite juice! It would go great with Brie and dried apricots on a baguette!

And with that, I was off. I had yet to use apricots, dry or fresh, in a grilled cheese, so I thought that would be a perfect place to start. Plus, I always stick with very similar breads so a baguette would be a great change of pace. Now, I just needed to work on that reduction…

I had never created a reduction before, regardless of the type. Nor was I really sure of what a reduction is. I started to research different types of pomegranate reductions, but TMGastronaut, aka Jeremy, suggested that I simply add mint. Done. But I still didn’t know how to make a reduction, nor did I research how to either. I sort of winged it…with some assistance from the sous chef.

In cooking, reduction is the process of thickening or intensifying the flavor of a liquid mixture such as a soup, sauce, wine, or juice by boiling. Common preparations involving reductions include…(Wikipedia)

Around this point, we realized we had left the 1/4 cup of pomegranate juice on the burner for just a bit too long. It was gooey and sugary and kinda burnt to the pan. Time to start over. For the second attempt, I watched the process much more closely, messing with the heat almost too often. I also pulled the pomegranate juice/reduction off of the burner a little early as I realized it would continue to cook and needed time to cool. Although the second batch was not perfect, it was still a bit runny, it was much less burnt and continued to look better as it cooled. We were on the right path. We went with it.

Apricots are small, golden orange fruits, with velvety skin and flesh: not too juicy but definitely smooth and sweet. Their flavor is almost musky, with a faint tartness that is more pronounced when the fruit is dried. Some people think of the flavor as being somewhere between a peach and a plum, fruits to which they’re closely related. (WHFoods.com)

You may think it is odd that I have never had apricots, but I have had somewhat of a deprived lifestyle when it comes to random foods. Ha. (No offense, sous chef.) When Jeremy mentioned dried apricots, I was very excited to try something new. We went to our local grocery store to see what types of dried apricots they had, finding various brands at various prices. Considering I had never tried dried apricots, I only wanted a small amount. These packages were too large. We contacted Whole Foods to see if they sold dried apricots by bulk so I could only purchase a handful or so. They ran out of the bulk but were willing to take a package and sell as much as I wanted. I purchased about a handful and I was well on my way…

While at the grocery store, I found a very intriguing baguette. I was hoping to find a plain (sourdough?) one but when I saw a “sunflower sesame baguette,” I could not resist. I was worried that it was was not wide enough for a grilled cheese, but the flavor and crunchy outside/soft inside made up for its somewhat small size. I was pleasantly surprised at how good this bread was.

Ignoring the fact that my pomegranate reduction was not perfect, this grilled cheese was very different and something that I would definitely try again. It was very yummy and would have been great if my reduction was cooked correctly. I am very thankful that Jeremy was there to steer me in the direction of this grilled cheese. The bread was a perfect container to a very unique pairing of brie + dried apricots + pomegranate reduction. The taste created by these ingredients was very different and one I recommend you trying.