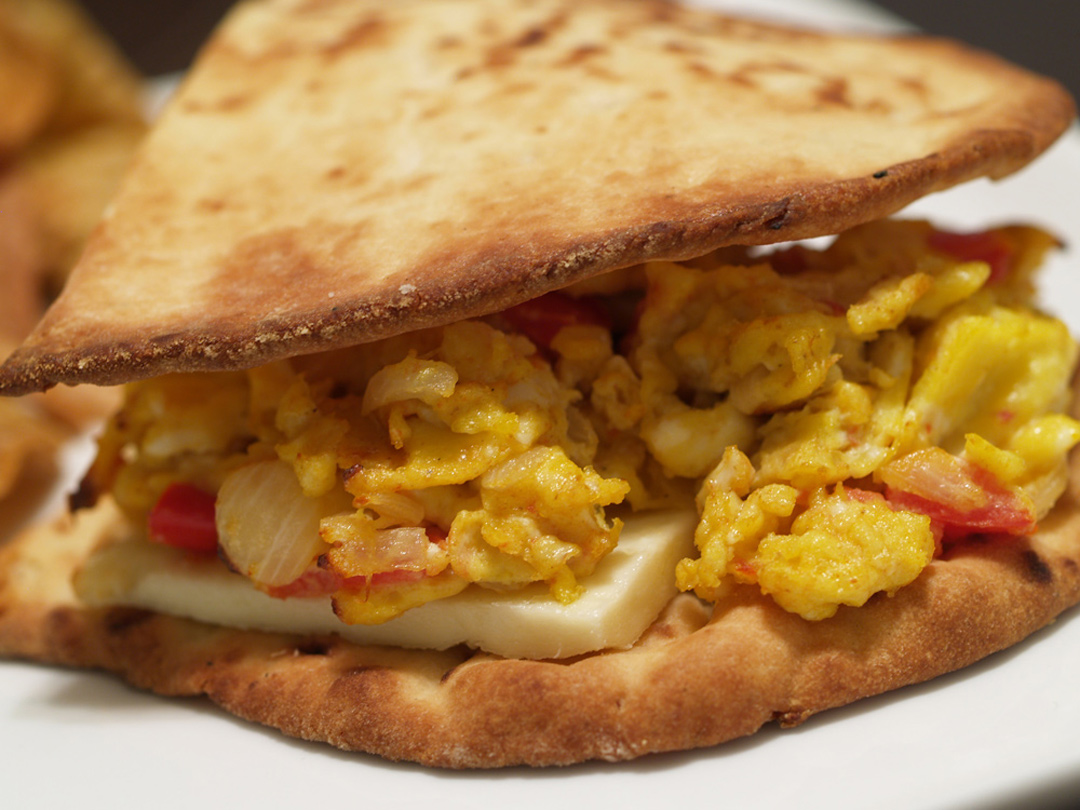 When the mice are away, the cat will play.

Let’s pretend for a second that I am a cat and my folks are the mice. Well, the mice are currently away celebrating their 35th anniversary (congrats to them), so the cat decided that he would play. I decided that I wanted to try to create something new and unique that I had never really messed with before. I wanted to perfect a recipe prior to unleashing it on the masses, aka my family.

A friend of mine made a post on grilledshane’s Facebook fan page suggesting that for my next Sunday Dinners sandwich (a quesadilla, coming soon), I should not use a plain tortilla shell. Instead, I should use a flavored one, such as garlic herb. Not a bad suggestion at all. However, his comment got me thinking about naan bread, which I just happened to have in the refrigerator. For all of my previous sandwiches, I have used typical white/wheat bread, but then I got to thinking that I did not need to go the typical route anymore. I need to think outside the box, and my naan bread sits right outside that box. That is when I said, I will try to create a naan grilled cheese.

I googled “naan sandwich recipe” and stumbled on SanjeevKapoor.com which helped get my mind started on how to create tonight’s grilled cheese. Onion, tomato, and scrambled eggs were all used in this naan grilled cheese. I added shallots for the heck of it and cumin and curry to add even more Indian influence into this Indian dish. This particular recipe called for green chillies, but I went ahead and used red.

And then there was the cheese.

The recipe I found did not include cheese so I was not sure what I was going to do. I had though that I would use the leftover mozzarella from last week’s grilled cheese, but that is definitely not Indian. Then I went on a hunt for Paneer cheese, which I only learned about today.

Paneer is the most common South Asian and Persian cheese. It is an unaged, acid-set, non-melting farmer cheese made by curdling heated milk with lemon juice or other food acid. The process is similar to queso blanco, except that Paneer does not have salt added. Paneer is very closely linked to the Turkish Beyaz peynir which is also strained and squeezed the same way. (Wikiepedia)

I believe that Paneer cheese is similar to tofu in that it takes on the flavor of the other ingredients it is paired with, which would be very interesting in non-grilled cheese entrees. Oddly enough, I only now read that it is non-melting cheese, which would definitely explain why the cheese in my sandwich only partially melted. Whoops! I guess I should have investigated much more, especially when I paid $9 for a small package at Whole Foods. Let me tell you, not many grocery stores/markets have Paneer cheese. Although I wanted to continue with the Indian influence, another cheese would have most likely worked better, as I would have probably chosen a meltable one. In the Wikipedia article it mentions similar American cheeses, which might be a good place to start if I were ever to recreate this grilled cheese.

So how did I prepare this grilled cheese you may ask? Well finally, I am about to tell you. I warmed up the naan bread, by itself, as I prepared the other ingredients. When I use butter for my grilled cheeses, which isn’t always, I use sweet butter, Land O’ Lakes. I used that exact same butter this evening when I started sauteing the tomato, onion, shallots and red chillies. As they were working in the pan, I added in the curry and the cumin. I did not measure this out so just do it taste. In future versions, I would add more, but since I have not used curry and cumin in the past, I wanted to be cautious as it is easier to add than delete.

Once the onions were turning a golden brown color and everything seemed to be looking good, I added in the eggs. I just scrambled everything together until my eggs were done just how I liked them. Then, I cut the naan bread in half, placed a few slices of the Paneer cheese on the bottom half,  placed the cooked egg mixture on top and closed the grilled cheese. I cooked it for about 7 minutes in the oven (400 degrees) and that was that. The only thing left to do was eat.

This naan and Paneer grilled cheese sandwich was very good and one I hope to perfect in the coming days/weeks. As I mentioned, I am new to Indian spices and ingredients so hopefully as I continue my grilled cheese cooking, I will delve deeper into Indian cuisine. I might even feature this grilled cheese as a Sunday Dinner, but since this was so in depth this evening, I may not. I do not know. Definitely try this and let me know what you think, and leave your thoughts in the comments.