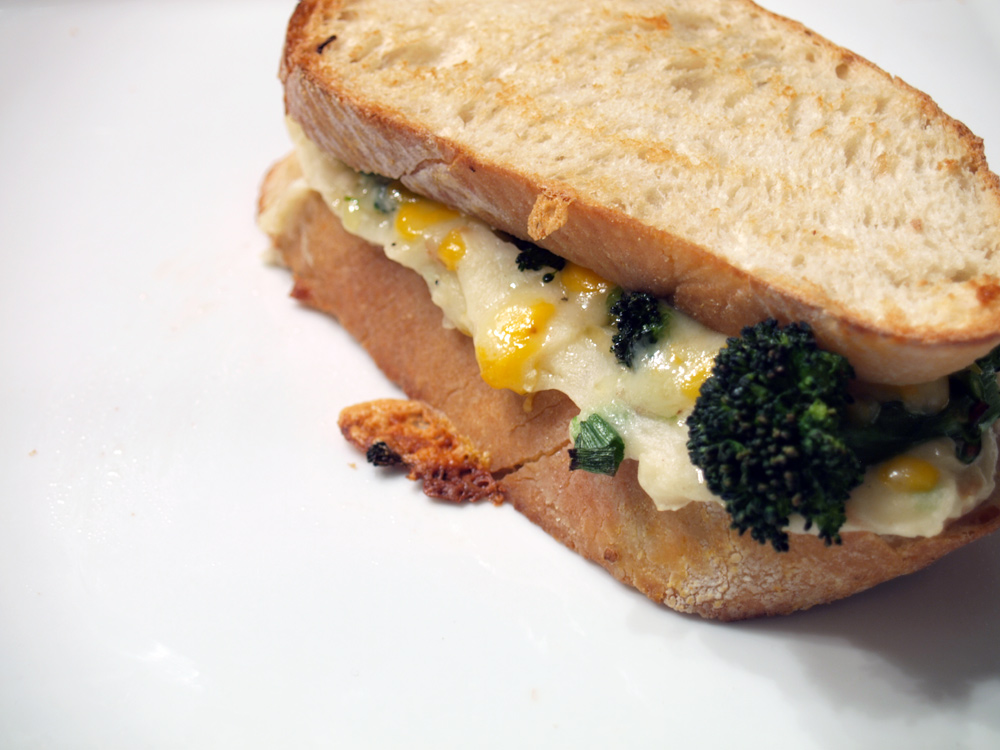 When thinking about mashed potatoes and getting inspiration from a loaded baked potato, cheddar was the first cheese that I thought of. Luckily, my local market had Great Lakes Sharp Cheddar on sale. After tasting said cheese, I realized I could have gone with a sharper Cheddar, which is what I enjoy, but the lack of bite did not affect the outcome of the grilled cheese. If you like a more mild Cheddar, this cheese would be perfect for you.

As was the case with the Nachos & Cheese Super Bowl Grilled Cheese, I felt that one cheese was not enough. This Wisconsin Havarti was also on sale, so why not have something a bit sharp and a bit creamy mixed together? This cheese is smooth and buttery and a perfect contrast to the Cheddar. The Harvarti would be great on a grilled cheese just by itself and worked perfectly in this sandwich.

I knew from the beginning that I wanted to include garlic (I used roasted garlic) and chives or green onions directly in the mashed potatoes. (Keep in mind, chives and green onions are similar ingredients and used interchangeably, but they are not exactly the same.) I went with chopped green onions for this grilled cheese. I used approximately two stalks for two sandwiches and some left over mashed potatoes. Both the garlic and green onions added a great kick (not spicy kick though) that resonated throughout the dish and was the reason the grilled cheese was so successful.

Also included in the mashed potatoes was rosemary, salt, pepper, butter and milk. (Normally I am unable to include any milk products in my mashed potatoes because they are normally eaten with meat and I do not mix meat/milk. Kosher, remember? This was a nice change.) Finally, I included just a couple of slices of each cheese to give it a bit more flavor.

This is how the potatoes looked after all mashed up and creamy. I tasted these multiple times, adding more salt, pepper, garlic and green onion as I went. Since taste is personal, make sure to taste as you go along and season accordingly.

Now what did I decide was the it ingredient? The special ingredient that would send the grilled cheese over the top? I was wracking my brain trying to think when it hit me: broccoli. Broccoli is often served on loaded baked potatoes so why not on this grilled cheese? We steamed the broccoli for a bit and then sauteed them in a pan with some green onions, butter, salt and pepper.

There was some serious debate regarding what type of bread to choose for this sandwich: Multigrain? Sourdough? Roasted Garlic? These all were good choices but we were afraid that the bread would overpower the interior ingredients. Therefore, we went with a Country/Italian white bread.

When I told my great aunt that we were making a grilled cheese with mashed potatoes, she said, “That sounds good but we normally like french fries on the side of ours.” She thought that the mashed potatoes were on the side not in the sandwich. Once I clarified, she proceeded to tell me that that didn’t sound good and that she is never coming to my restaurant.

This grilled cheese was all about pushing the envelope of what a grilled cheese can and should be. Who says mashed potatoes have to be on the side? Why can’t they be inside? After taking the first bite of this grilled cheese, I thought, “This is weird.” The smooth texture of the potatoes mixed with the crunchy texture of the bread was something I had not experienced before. It was something new and unexpected. However, as I continued to eat, I realized that although the texture was startling at first, the grilled cheese itself was fantastic. The garlic green onion mashed potatoes had the perfect kick, while the broccoli added nice texture. Overall, this was a fantastic grilled cheese that I may just make again this evening.

P.S. I read the concern that this grilled cheese sandwich was “heavy” but I never once thought that as I took each bite. Common sense would leave you to believe that, what with the potatoes and bread, but it wasn’t. The mashed potatoes were more creamy than anything, adding a great contrast to the crunchy bread.