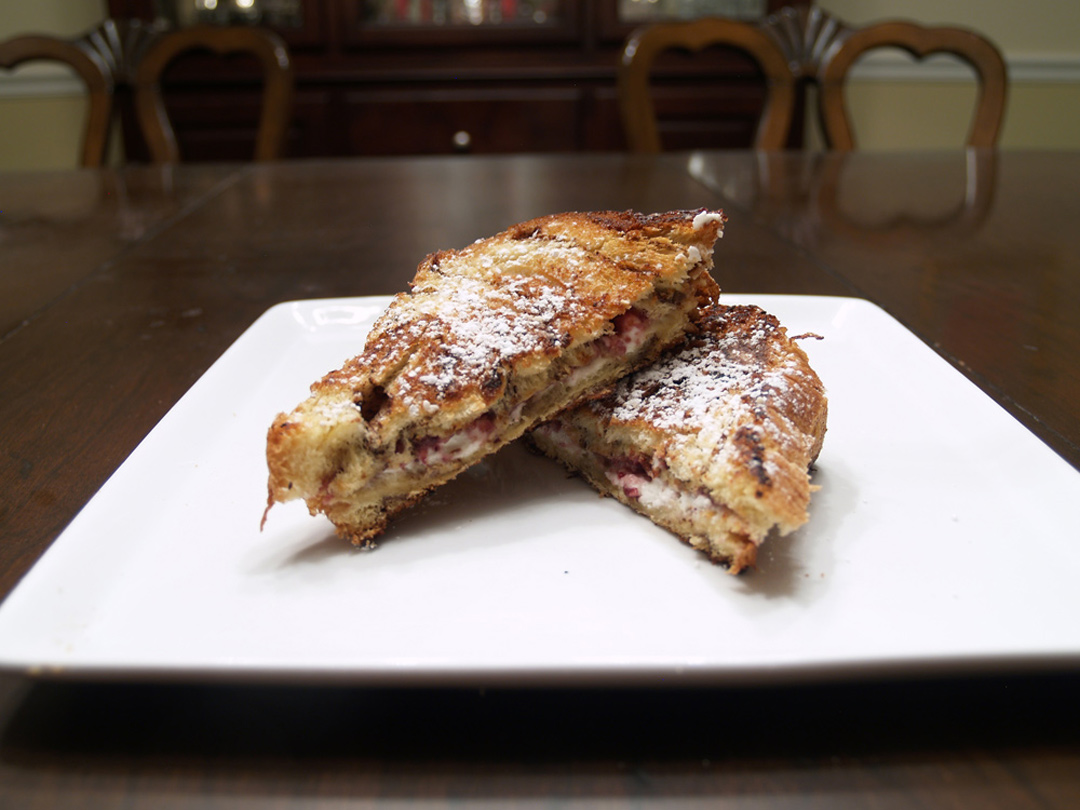 This week, I decided to search the Internet and my Grilled Cheese Book for recipes that included goat cheese instead of creating my own. I have been nibbling at this cheese ever since I bought it but had not yet used it in a starring role in a grilled cheese sandwich. I came across two that piqued my interest: Grilled Goat Cheese Sandwiches with Fig and Honey & Goat Cheese and Honey on Cinnamon-Raisin Bread (from the book). This particular grilled cheese features Mackenzie Creamery Goat Cheese.

Finally, I have created a grilled cheese that features the awesome goat cheese from Mackenzie Creamery, as I have previously written about.

It’s hard to beat the flavor and texture of fresh Chèvre. It’s not just delicious, it’s downright decadent. Chèvre, which is made from the milk of a goat who was milked just a day or two earlier, has an extremely mild taste and smell with a texture so rich and creamy you feel like you’re indulging in something sinful! A spoonful of fresh chilled chèvre is like having a bite of the finest ice cream.

Chèvre is French for “goat” and is also the common name for fresh goat cheese. This remarkable cheese with its rich, creamy texture and mild, salty taste is available in a myriad of flavors and package styles and has rapidly become one of America’s epicurean staples. (MackenzieCreamery.com)

This Mackenzie Creamery cheese is fantastic. Smooth, creamy are definitely adjectives that I would use. It also has a great finish that has a nice, small kick. I would be remiss to mention that goat cheese has quickly become one of my favorite cheeses. Yum!

I had the option of using the garlic chive version as well, but I thought it would add too much flavor to a grilled cheese that already had plenty of flavors (preserves, and cinnamon bread). I will, however, use it for another sandwich. Next week is a possibility, as I may have an idea that would work well with this particular goat cheese.

I still was not sure I was going to use these recipes until I smelled the cinnamon bread at the market down the street. Even through the bag, I could smell the cinnamon flavor bursting out. It was divine. I now knew which grilled cheese I would be creating.

Since I had never had fig preserves before, and the market only had a large jar that had a lot of “junk” in it, I started searching for other preserves that might work as well. I stumbled upon Forest Berries preserves and never looked back. (No junk here.) These preserves, consisting of raspberries, blueberries, blackberries, cranberries, and strawberries, were coarse in texture with a nice tangy flavor. I loved the preserves so much, this morning, I spread them on a couple slices of some bread. It was delicious. The goat cheese was definitely the main grilled cheese star, but the forest berries preserve was the surprise ingredient.

I have not really cooked a sweet, desert-like grilled cheese sandwich for as long as I can remember, if ever. I am glad I finally decided to do just that. The combination of the crunchy cinnamon bread, tangy forest berries preserve and smooth Mackenzie Creamery goat cheese created a great texture and amazing taste. Yes, the honey taste might have been lost, but if that is the biggest complaint for this grilled cheese, I think I created something great.