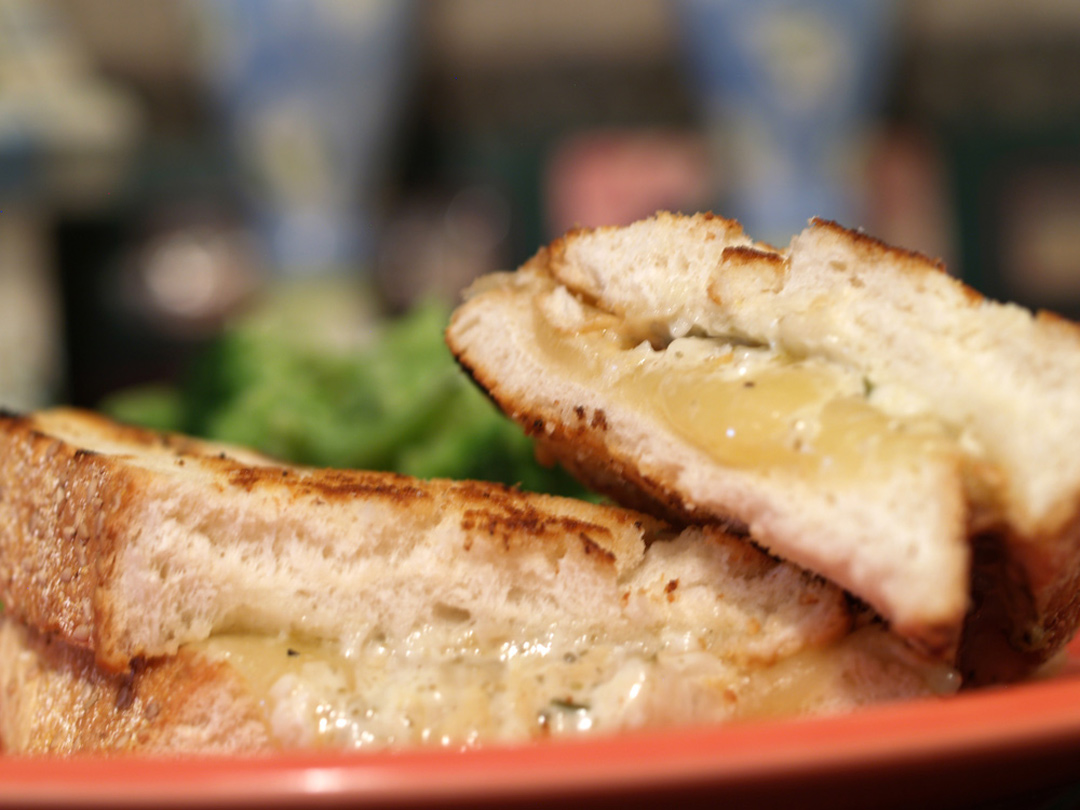 Let me start off by thanking @goldbedr and @allisonlemons for giving me great suggestions for tonight’s grilled cheese. Unfortunately, prior to seeing the ideas, I had already devised one of my own. These ideas will definitely make an appearance in the near future, as I am sure I will need plenty more suggestions. Now onto tonight’s grilled cheese, featuring lemon caper aioli…

>> please scroll down to the updated closing section to read my new thoughts, written after eating less-burnt sandwich number two.

In order to allow the lemon caper aioli to be the star of the show and stand out front, I chose a milder cheese for tonight’s grilled cheese.

Recognized the world over Swiss-style cheeses are known for their pale yellow color, slightly nutty flavor and large holes in the flesh. But though the Swiss have been making cheese for more than 2,000 years, no one knows for certain how these characteristic “eyes” first came about…learn more.

Unlike the Asiago from last week which was in your face, the Swiss tonight was much more mild and in the background. It took a second after chewing before I could truly taste the typical Swiss flavor. It was light and definitely had more of a texture as compared to a mozzarella but not as much as an Asiago. It was good and perfect for tonight’s grilled cheese, where the cheese was actually not the focus.

Here I sit a few hours after I took the final bite and I am still not sure what to say about it. Did I like it? Yes. Did I not like it? Eh, I wouldn’t go that far, but there were times where I thought it was good by not great. I tried something different by going with a lemon caper aioli instead of fruit/vegetable ingredients, which can become boring.

The lemon caper aioli consisted of mayonnaise, a bit of olive oil and garlic, capers, lemon zest/juice, white onion, and salt/pepper all mixed together in a blender. Unfortunately, we forgot to include the mustard, so we simply added it after spreading the aioli on the bread. Prior to creating the actual grilled cheese, I of course tasted the mixture and It had a great overall flavor with the lemon and capers shooting to the forefront. It would be great on just about anything (chicken, fish, homemade potato chips, etc.) but maybe not a grilled cheese. I still haven’t decided.

Tonight, since the weather was perfect outside, I decided to grill the sandwiches, which I had yet to do. Let’s just say that I will need a lot of practice before perfecting truly grilling a grilled cheese. Thankfully the sous chef was able to scrape off burnt portions of bread. Plus, we were very lucky to have enough bread to be able to throw away one slice. I had forgotten that the melting/dripping cheese would make the flame larger and stronger, which almost did in my grilled cheeses. Either way, I am still not sure about this sandwich.

The bread, a normal Italian, worked out perfectly. It is a great bread by itself, with butter, or as a sandwich bread. The Swiss cheese melted perfectly on the grill, which made me very happy. However, that aioli, I don’t know about that.

The night has continued on as I try and grapple with what I thought of this grilled cheese. Unfortunately, I still do not know. It was both great and somewhat good. The idea was great in my opinion it may not have been perfectly executed. Also, we started creating this grilled cheese late so there was somewhat of a rush. That is never good while trying to create a masterpiece. Tomorrow night will be take two of this sandwich. I still have aioli, swiss and bread left and plan on recreating this sandwich hoping that I may have an answer 24 hours later. Cross your fingers.

Tonight, I recreated the lemon caper aioli grilled cheese, all down to cooking it on the grill. Luckily, I kept a watchful eye and did not burn the sandwich, but instead cooked it thoroughly. This grilled cheese allowed for nicer looking photos and an improved tasting of the sandwich.

I also was able to figure out the conundrum that plagued me all last night into today. When cooking inside, on a pan, we are able to butter and butter the bread making it soft and moist. However, when cooking on the grill, I am not able to do that, even though I did butter the bread. Therefore, the bread was dry and crunchy while the insides, the cheese and lemon caper aioli, were wet. The conundrum was simply a texture issue: dry vs. wet. It really is as easy as that. Weird, huh? Beyond the texture issue though, this was a good grilled cheese and something that I would make again, for a third time. I just need to get over the texture issue.

Now that I have tasted the grilled cheese for a second time, I am changing the grade, for the better.