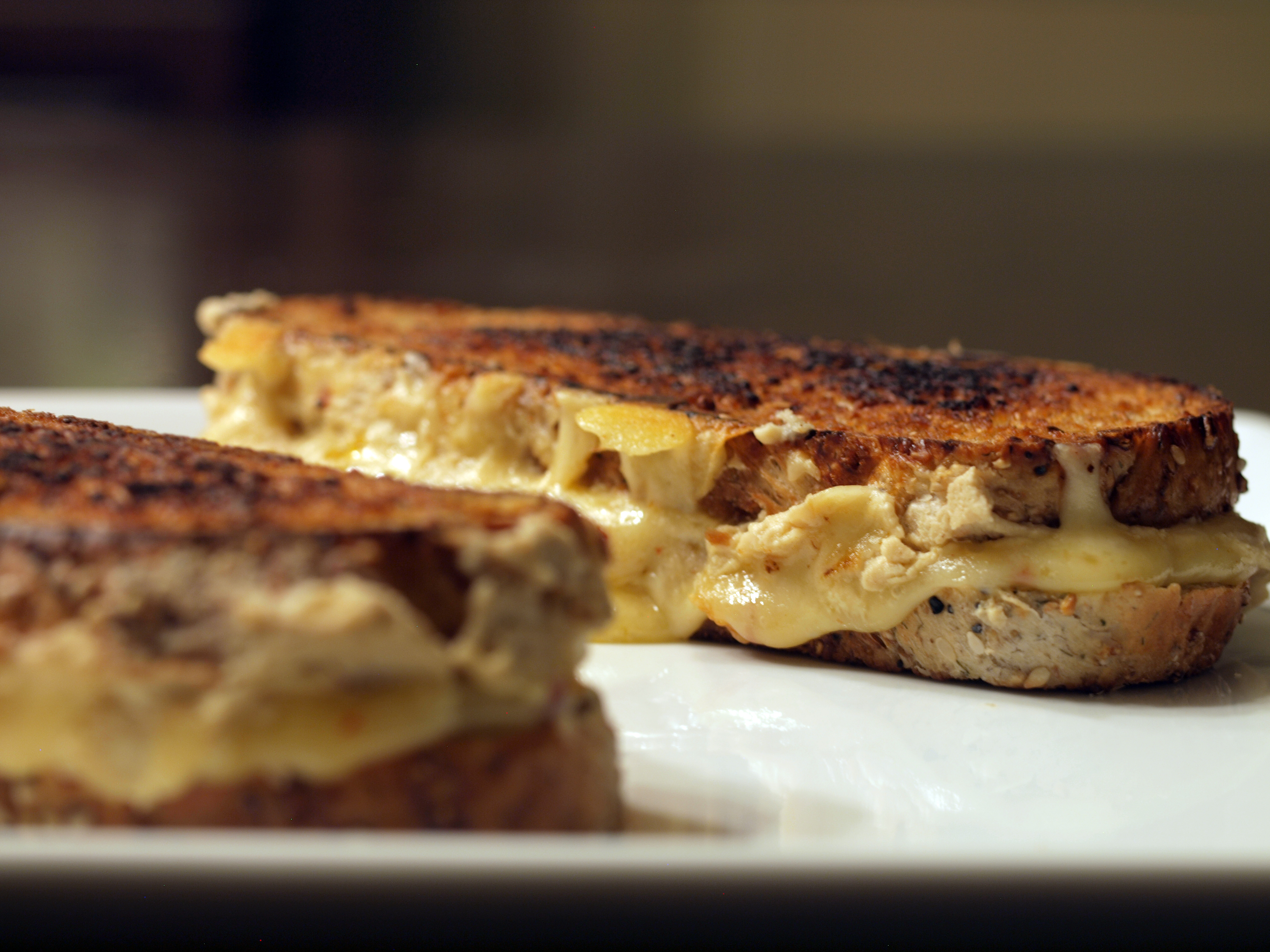 Once I knew that hummus was going to be the main ingredient, I wanted to go with a cheese that had a kick, a bit of a bite. I thought that by starting with a cheese that has a strong flavor, I could provide much of the flavor by the cheese as opposed to the hummus. I mean, this is a grilled cheese blog after all.

I was walking through Heinen’s, a local grocery store, trying to find that perfect cheese. I saw a few different varieties of nationally known cheeses prior to stumbling on a local cheese. I never even knew there was a Mayfield Road Creamery, let alone that they created a Pepper Havarti. I not only had found the perfect cheese but also one that is local.

When I took my first bite of this Pepper Havarti, I was worried that it was going to mainly be creamy with just a hint of a kick. Those fears were thrown out the door once I took my second bite and I got a true taste of the pepper part of the Pepper Havarti. This delicious cheese has a great creamy texture with just the right amount of kick. This was the perfect cheese for my hummus grilled cheese.

There are so many varieties of hummus, such as roasted garlic, sun dried tomato and roasted red pepper. With my choice of Pepper Havarti, I decided that I wanted to go with original/plain hummus, to allow the Pepper Havarti to mix in with the hummus and make a new combination/flavor.

For those of you that don’t know what hummus is, lets let Wikipedia explain:

Hummus is a Middle Eastern and Arabic food dip or spread made from cooked, mashed chickpeas blended with tahini, olive oil, lemon juice, salt and garlic. Today, it is popular throughout the Middle East (including Turkey), North Africa (including Morocco), and in Middle Eastern cuisine around the globe.

Way back when, I was not a huge fan of hummus. I do not know what changed my opinion, but now I love hummus (and its long lost cousin, falafel.) Hummus goes great with pita chips or just about anything. I would highly recommend you try hummus (it can be found at most local grocery stores) as I think you will fall in love with it just as much as I have.

Originally, I wanted olive bread as I thought that would fit the hummus / Middle Eastern theme I had going. The local market had olive bread on sale but, unfortunately, were completely sold out. Instead of going to another grocery store, I decided to look around the market and see what they had. That was most definitely the right move. I found Sarah Jane’s Onion Dill Rye, which, by itself and as part of the grilled cheese, was phenomenal.

By the description, you may think the bread would be strong and overpowering, except that wasn’t the case in the least. The bread has the right amount of strong flavor that is perfect if you eat it by itself, with butter/jelly, or as a sandwich. If you can find Sarah Jane’s bread by you, I would highly recommend it. (Heck, I used Sarah Jane’s for my performance on FOX 8 Cleveland.)

Everything about this grilled cheese was delicious. Whereas last week’s grilled cheese pushed the grilled cheese envelope and did it well, this grilled cheese stuck to its roots while also elevating the sandwich to a whole new level. The kick of the Red Pepper Havarti mixed with the smoothness of the original hummus all melted in between two slices of delicious onion dill rye…amazing. All of the ingredients worked in harmony to create a grilled cheese that was so simple to make but not simple in taste/flavor.