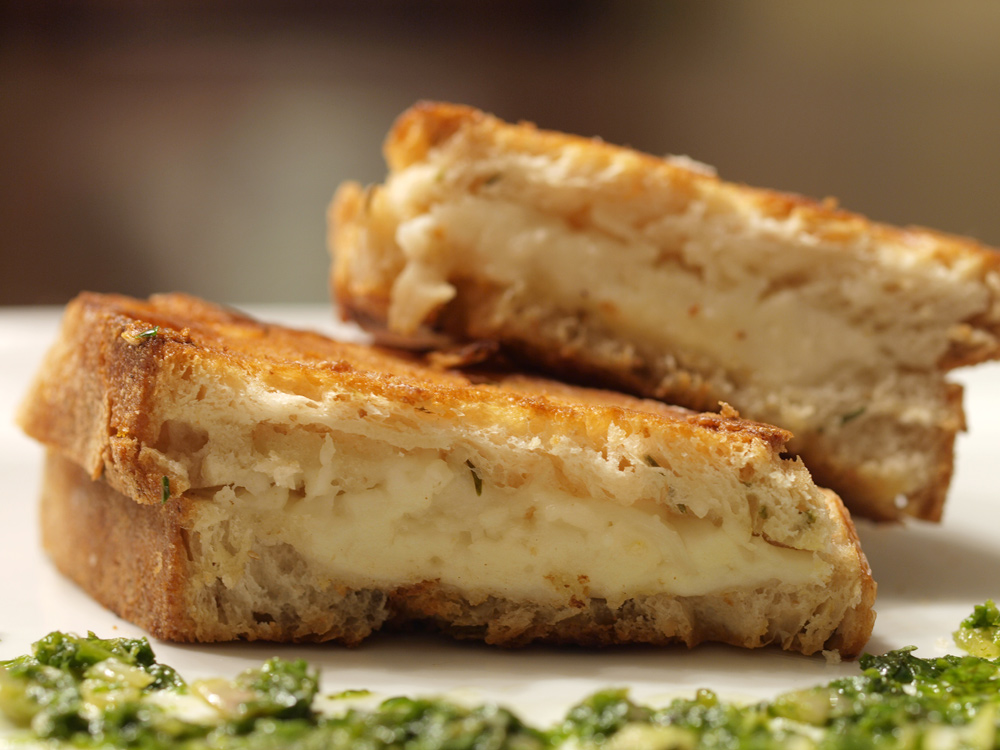 No great ideas came to mind when thinking of a new grilled cheese recipe so I traveled to Whole Foods for some inspiration. There, I of course found the goat milk cheddar but I also found some great bread. From there, I decided that I would go with a simple grilled cheese with a bit of flair. When sticking with one dish for so long, it is always good to go back to the basics, even if they are spiced up a bit. Plus, sometimes father prefers the simple.

Since I have been on a Wisconsin cheese kick, with the invention of the Grilled Cheese Academy and my mini-contest, I thought I would choose one more Wisconsin based cheese: Montchevre Goat Milk Cheddar. To get an insight into the cheese making process, I tried to find a web site for Montchevre but was unsuccessful. If you have an address, please leave it in the comments.

I am a huge fan of goat cheese (aka chevre). I have used it in multiple grilled cheese sandwiches and am not opposed to eating it plain with some crackers. However, I had never before tried goat milk cheddar. I wrongly assumed that this cheddar would not taste much different than cows milk cheddar.

Goat cheese is distinctive due to the tangy flavor of goat milk. Sometimes this flavor is very strong and some consumers find it disagreeable. In some cases, the flavor is sought after, and some dairies are well known for producing particularly goaty cheese. The strong goat flavor is caused by hormones, which will be reduced if milk producing nanny goats are kept away from male billies. In addition, like all animal products, goat milk is heavily influenced by what the goats are eating. Because goats have hardy digestive systems, they tend to eat many bitter plants that more delicate animals such as cows and horses will not. (WiseGeek.com)

This particular goat milk cheddar definitely had a distinctive flavor that I could taste from the minute I tasted a sample all the way through my last bite of the grilled cheese. Unfortunately, the flavor is hard to describe. I believe goat milk cheese is a very acquired taste and I am not sure that I have gotten to that point just yet. The goat milk cheddar was good, it was just very different as compared to other cheeses I am used to. It is very interesting to think that I really like goat cheese, but am still trying to decide if I like goat milk cheddar. Regardless, I would definitely recommend you try this cheese. It never hurts to expand your horizons. Plus, it is always good to support “local” cheese makers.

I was looking over the bread at Whole Foods, trying to find a variety that I had yet to try, when I stumbled on Rosemary Sourdough Boule. I was intrigued. I asked the nice lady her thoughts on the bread but she had not tried it as she is not a rosemary fan. However, she did inform me that the bread normally sells out very quickly, so I was lucky to find one left at 8 pm. After taking a taste at home, I knew I had made a great choice.

My dad enjoys mayonnaise or some sort of sauce with his grilled cheese sandwiches so, on a whim, I decided to create a pesto/sauce. I did not want him simply using plain mayonnaise, that would be boring. I took what I had in the kitchen, fresh spinach/fresh lemon basil/shallots/olive oil, and mixed them all together as fine as the mini-blender would let me. The flavor added a nice contrast to the goat milk cheddar.

This was a weird grilled cheese, which is not necessarily a bad thing. The taste of this grilled cheese comes down to the goat milk cheddar. If you like the flavor of goats milk, you will like the sandwich. If you don’t, then I suggest you try a different type of cheese. The bread was good but I feel that the rosemary flavor was lost on cooking. Finally, and most surprisingly, the on a whim pesto really added a great flavor and helped tone down the flavor of the goat milk cheddar. In the future, I would use it not as a “dipping sauce,” but would instead include it in the grilled cheese. Overall, this was a good grilled cheese that let me expand my horizons in both the cheese and bread departments.