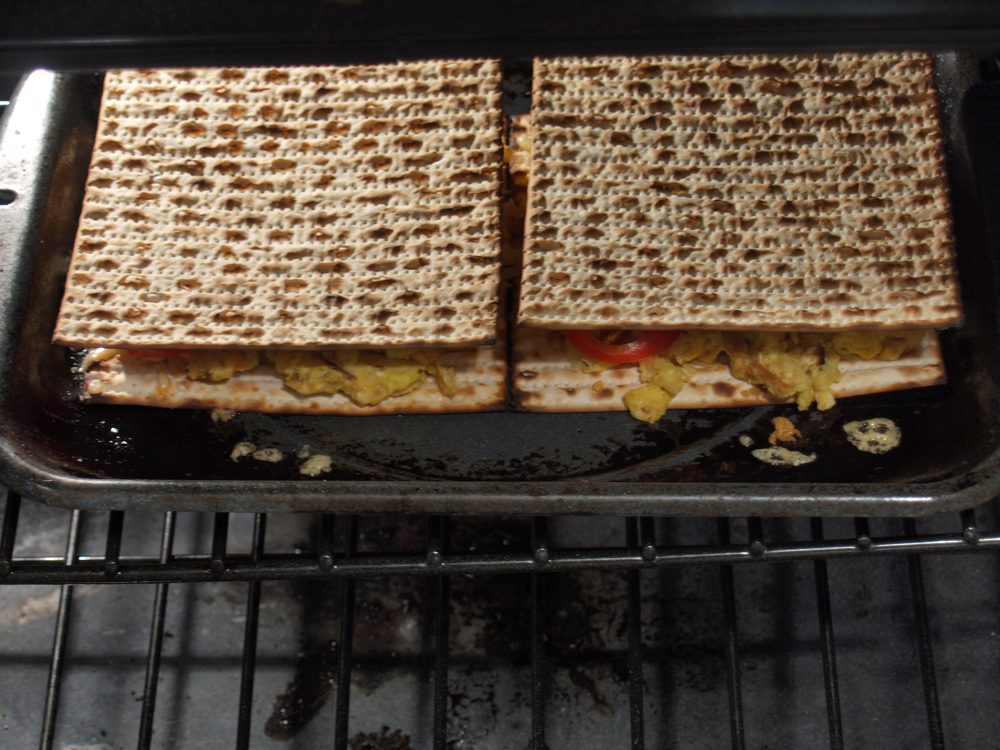 When I originally started this grilled cheese project, I never imagined that I would be doing it for 3 years plus, nor did I think that I would create special grilled cheeses for Passover. However, that is exactly what has happened. Originally, I created a Matzoh & Charoset Grilled Cheese and then last year a PassEaster Grilled Cheese, one that highlighted both Passover and Easter. This year, I was unsure of what direction to go in. Passover doesn’t really allow for many choices when it comes to a grilled cheese sandwich. However, I think this year was my best Passover Grilled Cheese Yet. Read on for all the details…and what exactly fried matzoh is.

I searched Whole Foods for a special cheese, focusing on cheeses that were on sale. Cantalet was the one I stumbled on.

(kahn-TAH-lay) is one of the oldest cheese in France, older even than Roquefort and Livarot. Cantalet is named after the Cantal Mountains in Auvergne, where it is produced from unpasteurized cow’s milk and received A.O.C. recognition in 1956. Affinage is least one month for a young cheese, up to 6 weeks for a medium cheese and 6 months for a mature cheese. The paste is smooth and straw colored and with age, it becomes darker especially around the rind. The flavor is buttery and nutty with earthy undertones and each bite lingers gracefully in the mouth. Cantal pairs well with a wide range of wines such as Beaujolais Cru, California Cabernet Sauvignon, Merlot, Sauvignon Blanc and Champagne. (Tastings Gourmet Market)

When sampling this for myself, I tasted a very mild and yummy cheese. Without knowing anything about this cheese, I was impressed with how good it was and how well it worked in the grilled cheese.

During Passover, as you probably already know, one’s diet is extremely restricted, putting a huge strain on one’s creativity. However, this year, I think this grilled cheese could stand up against any bread grilled cheese. It was that yummy.

I don’t know when I wrote the above recipe for fried matzoh (or matzoh brei), but I will do everything I can to keep it. Fried matzoh is my go to meal during Passover, even more so than matzoh pizza (which really isn’t bad). When I was making some fried matzoh last week, the lightbulb appeared over my head, “Why not put this in a matzoh grilled cheese?” And we were off.

Making fried matzoh is actually real easy, as evidenced by my recipe. The first step is to soak however much matzoh you would like in some water. The amount of time depends on how soggy you want your matzoh.

In a separate bowl, prepare however many eggs you would like. In this case, for two sandwiches, I went with four eggs. This is the bowl you will mix everything in.

Once you have squeezed out the excess water from the matzoh, put it in the bowl with the eggs and mix. Add salt to taste.

Side Story: Back when I was at the University of Cincinnati, every year, I attended Passover Seder at Hillel. Every year, the Rabbi would have fresh horseradish on the seder plate, instead of the imitation stuff that most people use, including my family. Every year, he requires everyone to eat one whole piece of fresh horseradish, making sure to swallow. Out of the 5 years I was there, I don’t think I succeeded once. (I am a wuss.) The Rabbi succeeded every year.

Once all the ingredients are mixed, you simply cook the eggs like you would regular scrambled eggs.

The grilled cheese would have probably been great with just the Fried Matzoh, but I decided to include fresh tomatoes as well. If you aren’t a tomato person, feel free to leave them out, otherwise, I would definitely recommend them.

What is there to say about matzoh? Really, what is there? It is pretty horrible but must be eaten by Jews for 8 days as a horrible alternative to bread. However, when life gives you matzoh, make a delicious fried matzoh grilled cheese.

I enjoyed the past two Passover grilled cheese sandwiches, there is no doubt about it. However, with this sandwich, I did more than just enjoy it. This grilled cheese stands up against all the other, non-inhibited Passover sandwiches. The crunch of the matzoh mixed with the soft interior created (from the fried matzoh) a great overall texture. Throw in the creamy horseradish mayo with a little kick and you have the recipe for a great grilled cheese. This truly was a winner. Even if you aren’t Jewish or don’t eat matzoh, I would still highly recommend this Passover grilled cheese. Now it is time for me to go finish the other half of this awesome grilled cheese…