Recently, I was lucky enough to be sent free cheese courtesy of both Kerrygold [Instagram] and Cabot [Instagram]. In honor of this free cheese, and Grilled Cheese Month 2014, I have created the series, Free Lunch. In this series, I will be creating 4 different grilled cheese sandwiches, highlighting two cheeses from Kerrygold (Blarney Castle & Dubliner) and two cheeses from Cabot (Chipotle & Private Stock Cheddar). The posts, as you will see below, will be focusing much more on the cheese than the grilled cheese, leaving all extra ingredients on the kitchen table to be eaten later. I want the focus to remain on the cheese and any extra ingredients are a distraction.

Once the Free Lunch series is complete, I will move on to Local Lunch, a series that will highlight four local cheeses from the great state of Ohio.

Prior to describing how Kerrygold’s Blarney Castle tastes, let’s first learn about the cheese that it is based on, Gouda, and its origins. Gouda itself is the name of a city located in the Western Netherlands, in the province of South Holland, and was granted city rights in 1272. [1]

holland vs. the netherlands

At this point, you may be just as confused as I was regarding Holland and The Netherlands. Aren’t they the same thing? Or if not, what is the difference? You can look to Holland.com for a simple and informative answer, or you can watch a thoroughly entertaining video that will inform but also slightly confuse you with even more knowledge. The choice is yours. Regardless, after reading or watching, you will know Holland and The Netherlands are most definitely not one in the same.

Kerrygold’s Irish version of Gouda is named after Blarney Castle, which, according to Kerrygold, was built in order to protect “one of the richest herds and most prosperous pastures of the time.” [2] It is located in the city of Blarney, which is approximately 5 miles from the town of Cork, Ireland’s second largest city. [3] The first Blarney Castle was erected in the 10th century and made of wood. The second iteration of the castle was built in approximately 1210 AD and was made of stone. Finally, after the second castle was demolished for its foundation, the final version of the Blarney Castle was built in 1446 by Dermot McCarthy, King of Munster. That version still stands today. [4] Within Blarney Castle is also the famous Blarney Stone, which gives the gift of gab upon being kissed. [5]

Now that we have all that figured out it is time to focus on the cheese. Blarney Castle itself is a Gouda style cheese.

To make Gouda, whole or part-skimmed cow’s milk is cultured and heated until the curd is separated from the whey. The curd mixture is then pressed into circular moulds to create the traditional round shape – large wheels ranging from ten to 25 pounds. Before being coated with paraffin wax, the cheese is soaked in a brine solution to create the rind and enhance the flavour. It’s allowed to dry for a few days, then coated and aged for a few days to over one year. [6]

Most everyone knows that a typical Gouda round is covered with wax. What you might not know is the different color of the rind denotes the age of that particular Gouda. Dutch Gouda cheeses on the younger side are identified by yellow, orange, or red wax rinds while mature, aged (12-18 months) Dutch Goudas have a black wax. [6] [7]

Gouda ranges in flavour from mild to sharp depending on age. Young Gouda is mild, sweet, and fruity, but as time passes, the flavour becomes more complex. Mature Gouda, aged 18 months or more, develops a butterscotch colour, harder texture, and an intense flavour that can be described as almost Cheddar-like. Extra Aged Goudas, cured two years or more, are brittle in texture and amaze the palate with whiskey and pecan flavours. These are the rare Goudas prized by cheese connoisseurs. [6]

As an interesting side note, the term “Gouda” itself is not restricted to cheese of Dutch origin.

Blarney Castle is a mild and creamy cow’s milk cheese with rich and velvety undertones. It both feels and tastes similar to a young Dutch Gouda cheese… [2]

As I mentioned earlier, I had never tried Kerrygold’s Blarney Castle and haven’t had a good Gouda in a long time, so I was very interested to experience this cheese for the first time. After the very first delicious bite, I knew I was in love with this Blarney Castle Gouda style cheese.

Just outside the medieval city of Cork is the world-famous Blarney Castle, best known know for its famous stone, said to impart the gift of eloquence on those who kiss it. From Cork’s lush pastures and pristine water sources comes Kerrygold Blarney Castle Cheese.

The only qualities our Blarney shares with its namesake is its smooth character. Blarney is a nectarous semi-soft part skim cheese from the lush fields of Ireland. Completely natural and free from artificial flavours and additives, deceptive nonsense simply does not feature when describing this mellow mouth-watering cheese. Its subtle flavor is reminiscent of a young gouda. [8]

The smooth, creamy texture of Blarney Castle leads to an overall flavor of nuttiness with a bite that lingers on your tongue.

Honestly, I simply feel like I am in heaven when I taste this cheese. As you will see in a future installment of Free Lunch, I love Kerrygold’s Dubliner, but this is definitely on the same level with Dubliner. Yes, I received this cheese for free, but that doesn’t mean I am forced to like it. The texture and flavor combine to make a delicious cheese that I would highly recommend to all.

In this particular grilled cheese, I  just purchased a fresh loaf of Sourdough from the West Side Market so I used it as the foundation for the Blarney Castle cheese. The cheese, after being shredded, melted perfectly and evenly while the pre-buttered Sourdough crisped to perfection.

If I were to grade this creation, it would most definitely be an “A”; a classic grilled cheese, made with amazingly fresh Sourdough bread and 100% all natural Blarney Castle cheese. 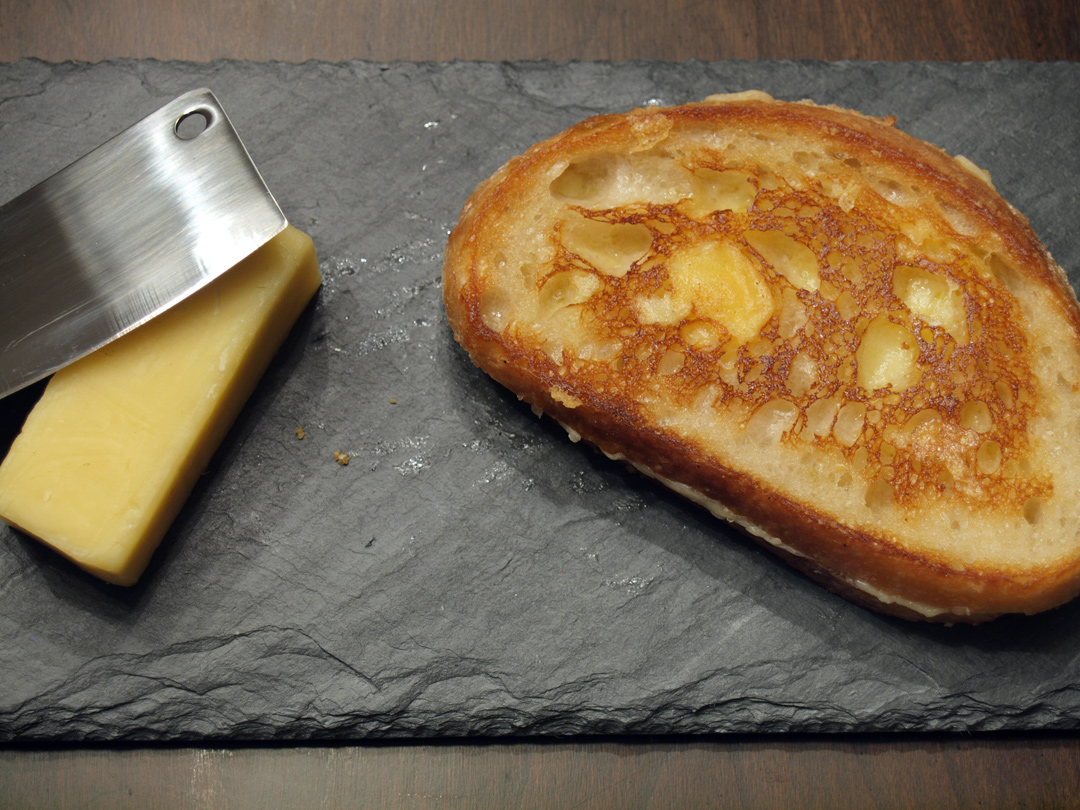