Cheese, in my opinion, is one of the most amazing ingredients in the world. Each and every time I try a new cheese or return back to an old favorite, it is like I am returning home. It is one of the best feelings, I, as a person, experience on a somewhat regular basis. And yet, I have only started to skim the surface of all the cheeses available. I am, by all accounts still a novice but I am enjoying every minute of the ride. This blog is only helping to increase my knowledge and hopefully educate you as well.

Yes, this is the final part of the Free Lunch series, but after a short break, I will be back with a new series, Local Lunch, highlighting three local, Ohio cheeses. I hope you join me for that. Long live the cheese…

The flavor of cheese can change greatly with the slightest change to a recipe or aged for an extra month or two. One Cheddar can taste so absolutely different from another for the smallest reasons. I am no cheesemaker or chemist or anything like that just yet, so I don’t know the exact details but it all most definitely intrigues me.

There is something special about cheese. I hope you agree as well.

Even though Kerrygold and Cabot are thousands of miles apart from each other, they have more in common than meets the eye. Like Kerrygold, Cabot is a group, or a co-op, of many like-minded farmers/families throughout the New England and Upstate New York area that have come together to increase their scale. Cabot itself started in 1919 when when 94 farmers came together and purchased a building that eventually became the original Cabot creamery plant. [1]

Ninety-four farmers all jumped on board – at the cost of $5 per cow, plus a cord of wood to fuel the boiler. The intrepid 94 purchased the village creamery (built in 1893) and began producing butter under the Rosedale brand name.

In fact, in 1930 cows outnumbered people, 421,000 to 359,000. It was at this time that the company hired its first cheesemaker and cheddar cheese entered the product line for the first time. [1]

In 1960, the membership of Cabot grew to 600 farm families while nationally, the number was in decline. The name “Rosedale” was dropped in the 1980s in favor of the “Cabot” moniker. In 1989, Cabot’s Cheddar won first place in the cheddar category at the U.S. Championship Cheese Contest  in Green Bay, Wisconsin. [1]

1992 was a pivotal year in the company’s history as Cabot’s farmer-owners merged with the 1,800 farm families of Agri-mark, a southern New England co-op dating back to 1918. Together, the combined companies boasted more than 1,500 farms, four processing plants and a large product line. [1]

It may seem like “sustainability” is just a buzzword that companies throw around to sound good. Cabot is not one of those companies. The effort that Cabot and their members take to follow their mantra (above), is extremely admirable. How a company, and especially a creamery or dairy, handles themselves, in my opinion, says a lot. I would recommend that you, at the very least, peruse Cabot’s sustainability section of their web site in order to get a true picture of the company’s ethics.

Cheddar has quickly vaulted to the top of the list of my favorite cheeses. A nice, aged Cheddar, I believe, can stand up against any of the finer cheeses throughout the world. Sure, as I said, I have so much more cheese to taste, but I can guarantee you, I will always enjoy a nice Cheddar. With all that being said, my knowledge of Cheddar’s origins is very limited.

Cheddar cheese, typically a cow’s milk cheese, was created in Somerset, England, around the late 12th century and was named after the caves in the town of Cheddar where the cheese was stored/matured. There are official records (pipe rolls, or scrolls housed in the British Exchequer or Treasury) of the King of England, Henry II at the time, purchasing 10,240 lbs of Cheddar cheese in 1170 at the cost of a “farthing a pound”. Henry II even declared Cheddar cheese to be the best in Britain and his son, Prince John, felt the same and continued to to purchase Cheddar for great Royal banquets. [2] [3]

Daniel Dafoe, a famous literary icon, wrote Cheddar’s second major reference in his book, Tour Through the Whole Island of Great Britain, highlighting “the system by which farmers pooled their precious milk resources to make great wheels of cheddar cheese.” Eliza Smith, in the early 1700s, also mentioned Cheddar in her cookbook, The Compleat Housewife. She included a recipe for Cheddar as well as detailed instructions for making Cheddar at home. [3]

Cheddaring, a term describing part of the unique Cheddar cheesemaking process, also owes its name to the town of Cheddar.

[Cheddaring] is the process of turning the slabs of curd and piling them on top of each other in a controlled way to help drain the whey.It also stretches the curd. The process helps to create a harder cheese with firm body and is unique to Cheddar making. [2]

Joseph Harding, also known as the ‘father of Cheddar,’ is credited with revolutionizing the process of making the cheese.

The Harding Method used to make cheddar includes a revolving breaker, a new machine that cuts the curds during the cheese making process by machine and saves the dairyman considerable time and effort. [3]

To learn even more about the process of how Cheddar is made, make sure to read The Nibble’s “Cheddar: Ancient Cheese Of Monarchs” article as it goes into great depth and makes sure to hit on how Cheddar is aged.

the village of cheddar

The Village of Cheddar has a long and ancient history, having been an important Roman and Saxon Centre. Cheddar’s Kings of Wessex Academy occupies the historical site of an Anglo Saxon Palace, with the ruins of the 13th century chapel of St. Columbanus still visible today. As early as 1130 AD, the beauty of the Gorge was recognised as one of the “Four wonders of England”. Historically, Cheddar’s source of wealth was farming and cheese making for which it was famous as early as 1170 AD. Cheese is still made in Cheddar today and some is stored in the caves to mature. [4]

The photo above is from the The Cheddar Gorge and its caves, where Cheddar cheese was originally matured long ago until present day.

The first thing you notice when observing this Cheddar is the black wax. It was an unexpected surprise that only makes this particular Cheddar that more interesting. It has a smooth and creamy texture that is combined with a great tang that lingers long after the cheese has been consumed. I like my Cheddar aged and with a strong flavor and Cabot Private Stock most definitely does not disappoint. Very delicious.

…an award-winning cheddar in the 2007 American Cheese Society Competition. Private Stock Cheddar was awarded a third place in the category Aged Cheddars in 2010 this great cheddar received a Silver Award in the World Cheese Awards.

For this gourmet Cheddar cheese Cabot’s Creamery hand-select the cheeses with the smoothest texture and cleanest cheddar flavor, then gently age them for at least 16 to 18 months. The result is what some long-time customers call the ‘best of the best’. Full-flavored yet elegantly refined, this is one of the most velvety, natural cheddars you’ll ever experience. A very smooth, extra sharp cheddar. [5]

The “meltability” of this Cabot Cheddar was simply unreal. I piled on the cheese as I have for all sandwiches in the Free Lunch series but this cheese melted like no other. As soon as the heat got going, the Cheddar started melting and oozing out of the grilled cheese. As I flipped the grilled cheese, the bread was sliding as the cheese continued to melt. Out of all 4 cheeses tried, this one truly wins the award for meltiest and ooziest. Plus, it was delicious. A win-win for sure. 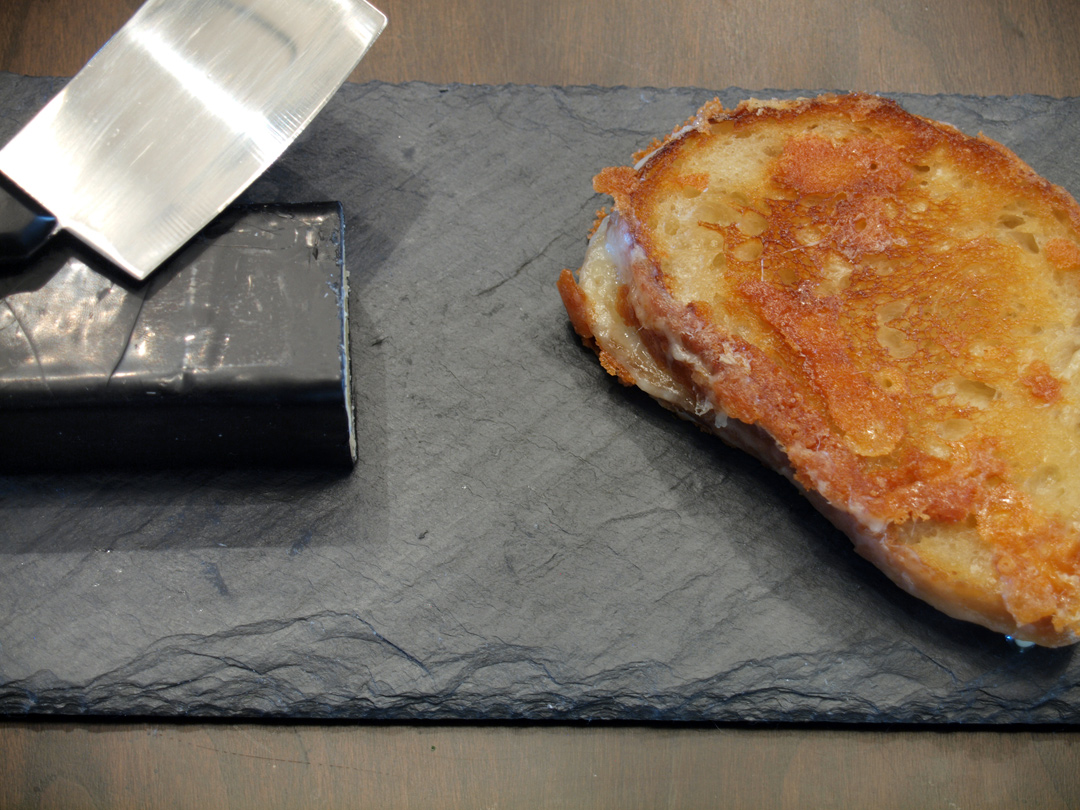