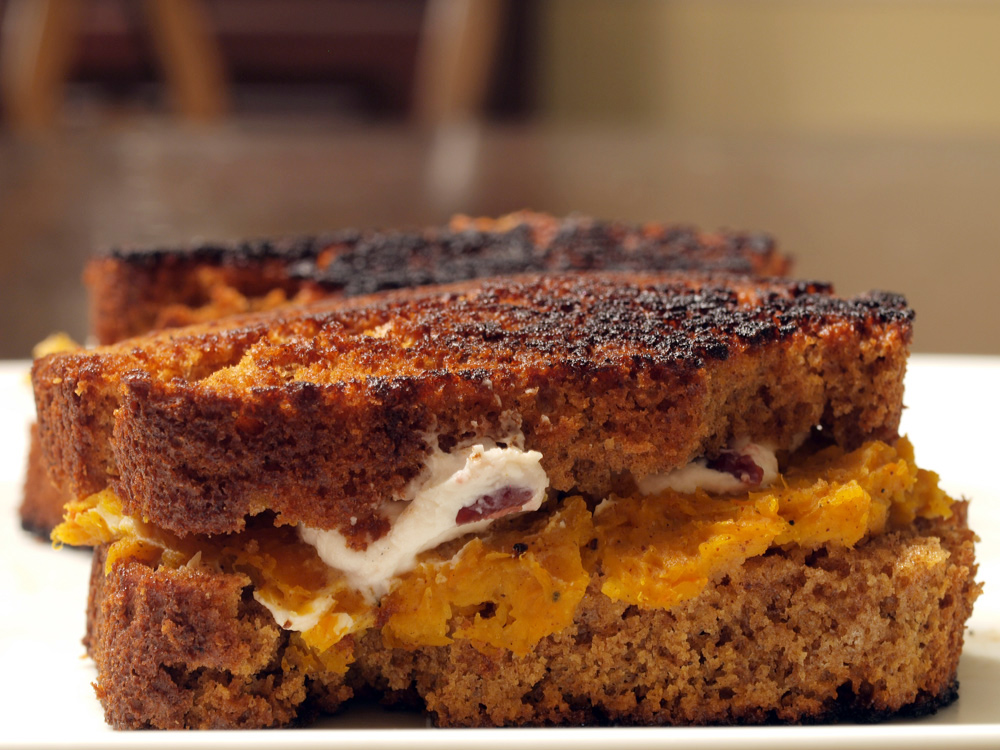 I have only created one Thanksgiving grilled cheese sandwich in the three plus years of this blog. I wanted to change that this year. After my 2009 creation, Pumpkin Pie Grilled Cheese, I had a lot to live up to. I had to make this grilled cheese bigger and better. I had to think far outside the box. I had to push myself. I had to include butternut squash. I think I succeeded but you must be the judge…

I won’t bore you with the details of chevre (aka goat cheese), but I will tell you about this particular cheese. This cranberry orange chevre was creamy and had a nice tart, strong flavor to it. (It worked really well with the other ingredients/bread of this grilled cheese. More on that later.) I am still not sure if there were cranberries mixed up and large pieces or just pieces, but that is irrelevant. The cheese really is fantastic and was a perfect choice for this grilled cheese.

Besides making beer bread in January, I haven’t made bread since the family bought a Sunbeam bread maker about 10-15 years ago. Those were the days! When I was at Heinen’s and saw the Orange Cranberry Chevre, I also saw a pumpkin bread kit. I thought, hmmm, why not make pumpkin bread for this year’s Thanksgiving grilled cheese? The sous chef returned to Heinen’s while I was working, asked about the kit and the clerk actually said that Pillsbury Quick Bread mix is a better choice and what he uses. I would say he is 100% correct. The pumpkin bread had the perfect mix of flavor and spice without being too strong or overpowering. Fantastic enough that I have continually been nibbling on the leftovers…

This may not be that much of a secret ingredient, but when baking and the recipe calls for water, the sous chef mixes some orange juice with the water. She says it adds something. I personally don’t know the difference since I have grown up on it so you will have to let me know what you think.

Whole Foods gave me this idea when I saw they had butternut squash on sale. (This particular butternut squash was purchased at Miles Farmers Market.) It is a very fall-like ingredient and not something I have used much at all. This was the third and final piece to this year’s Thanksgiving grilled cheese.

After baking the butternut squash to get it soft on the inside, it was time to add the many secret ingredients.

Included with the butternut squash in a saute pan was cinnamon, nutmeg and some of Mackenzie’s Cranberry Orange Chevre. (I added cheese to the butternut squash and separately on the sandwich.) I warmed it just a bit until all the ingredients were mixed thoroughly. I didn’t measure any of the added spice/cheese, just added until I personally thought it tasted good.

Brewed with honey and spiced with fresh ginger and cinnamon (More Details, PDF)

If you aren’t from Cleveland or maybe even Ohio, you may not know about the cult status of this particular beer. Every year, Great Lakes makes more and more Christmas Ale, and every year they sell out prior to it’s namesakes holiday. It is a beer that everyone in Cleveland has had at least once…every year. Grocery stores stock case after case and after just a few days they are sold out. I figured what better beer to drink with this Thanksgiving grilled cheese than a local, famous Christmas Ale?

While cutting and placing the pumpkin bread in the pan, I could tell it was extremely soft, flaky and fragile. While cooking, I left the heat on a little too high and the bread in the pan a little too long leading the bread to become crunchy and brown. Before you think that was a bad thing, it actually created a crunchiness that would have otherwise been missing and in turn made eating the grilled cheese much easier. The biggest issue I found was trying to spread the Cranberry Orange Chevre so that it was not clumpy in and the grilled cheese and instead evenly distributed. We did not perfect that method. When I was able to take one full bite of the grilled chese, containing the chevre, butternut squash and pumpkin bread, I turned to the sous chef and said, “This [Cranberry Orange] cheese and grilled cheese sandwich is amazing.”

Even with the crunch of the cooked pumpkin bread, when the grilled cheese came all together, it was delicious and a sandwich I would eat again. Was it better than the Pumpkin Pie Grilled Cheese? No, it was different and that was exactly what I was going for. It had complex flavors with a great texture that in the end, created a very unique grilled cheese sandwich.