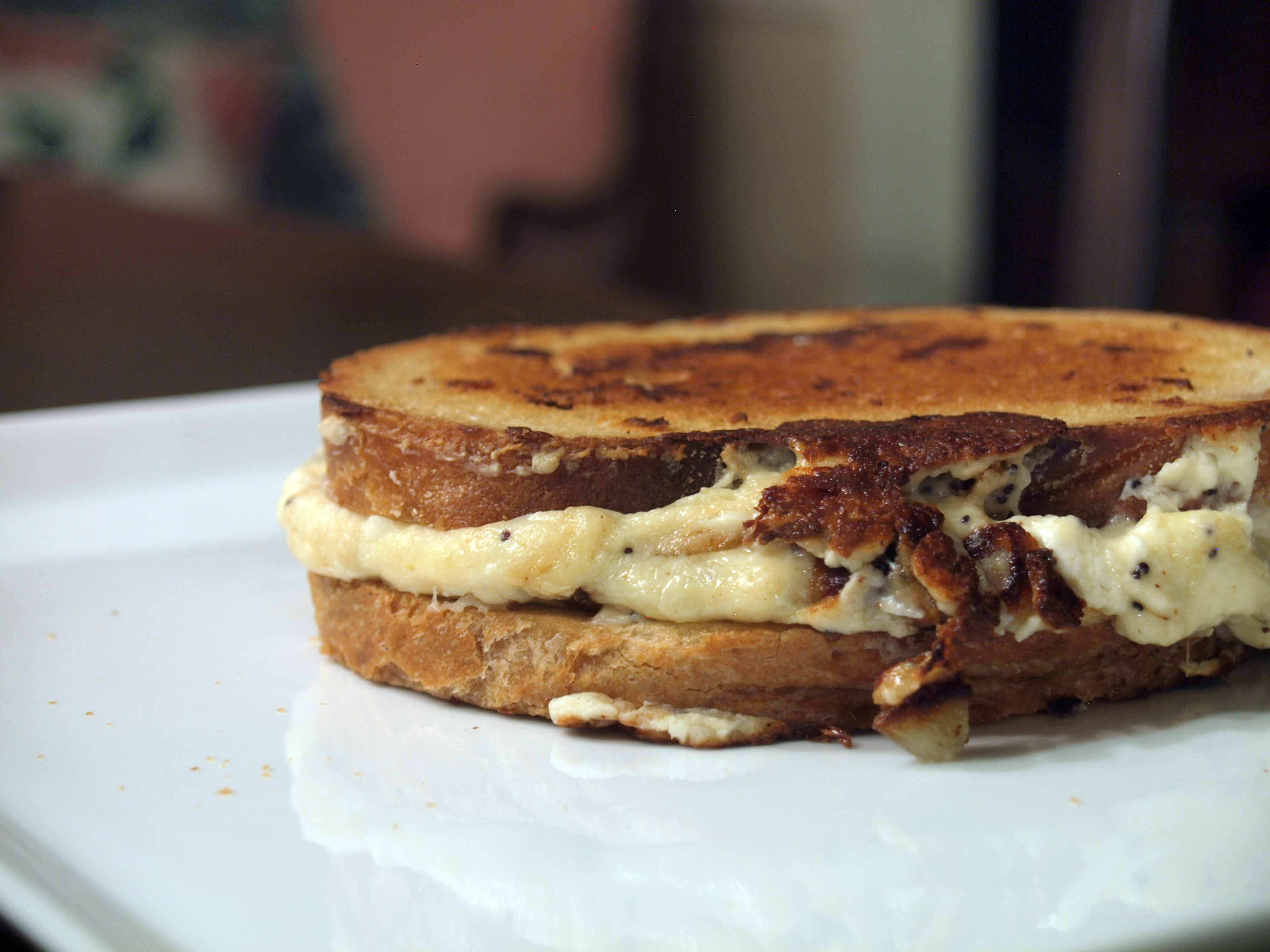 I must start this post with sincerest apologies to Cabot. I don’t even know when at this point, but Cabot sent me a pack of cheese, including their Everything Bagel Cheddar. Ever since, I had wanted to make an Everything Bagel Grilled Cheese. I was …

My “Grilled Cheese” Google Alerts have been piling up in my inbox and open tabs in my browser. I was saving the great grilled cheese sandwiches from around the web yet I had no time to post them. That time has come now, and it … 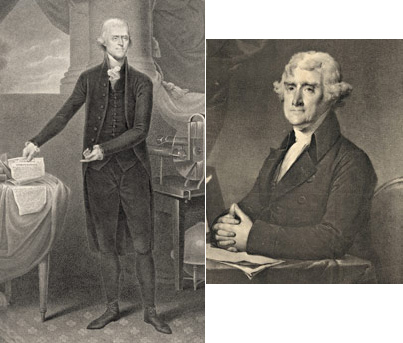 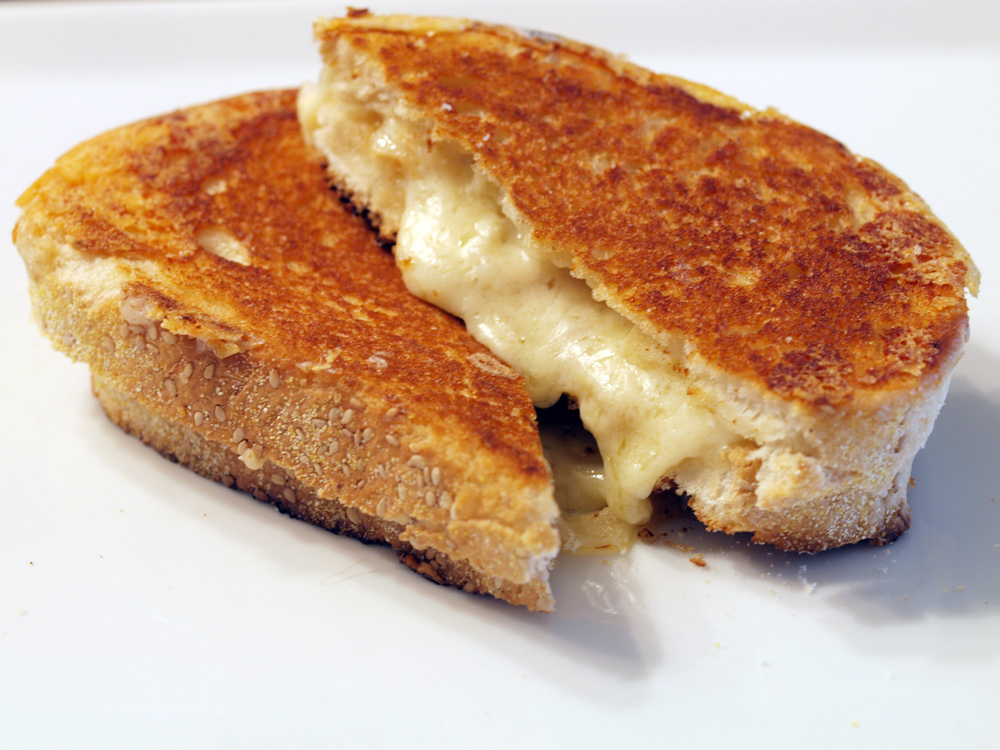 I must start this blog entry with what I think was a pretty funny story; I just hope you find it funny as well (even if it is dorky). I wanted to make a new grilled cheese the other day but had absolutely no idea … 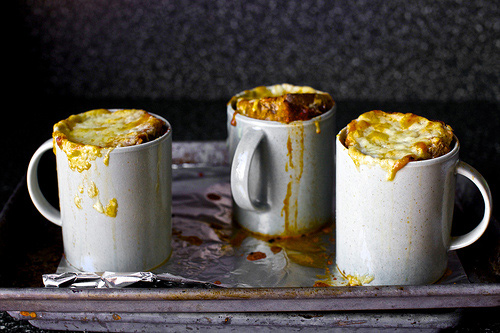 roasted tomato soup with broiled cheddar (courtesy smitten kitchen) When I first stumbled on this recipe, my mouth just about hit the floor. Not only do the photos make me drool, they are phenomenal, the actual recipe itself is ingenious. It puts a very unique spin … 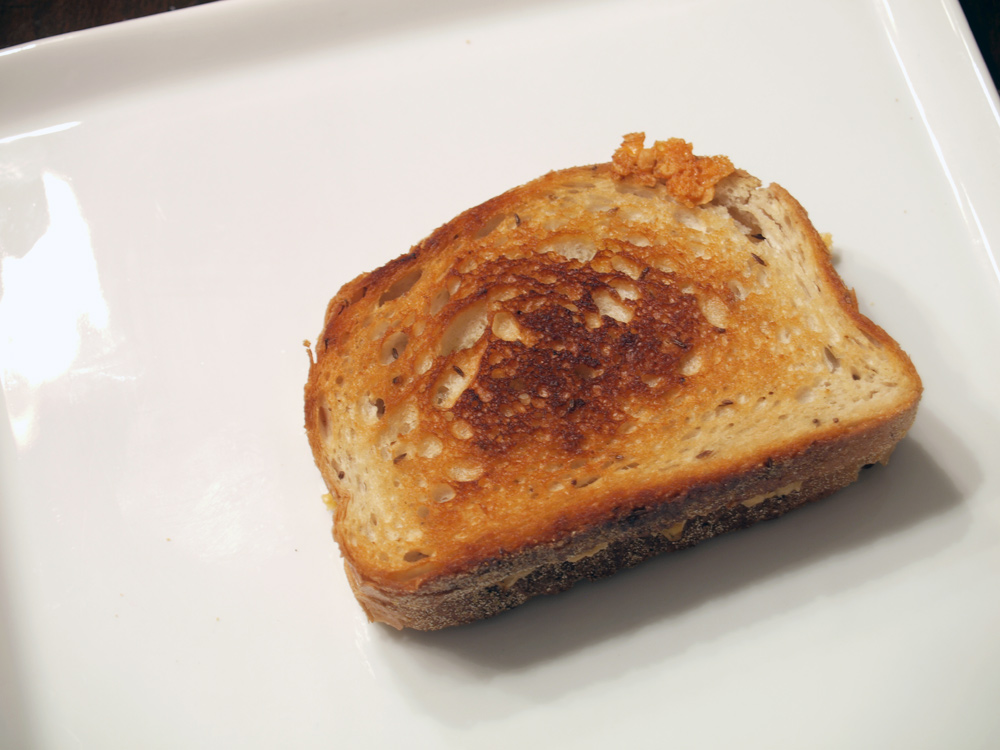 I was not planning on cooking a grilled cheese this week as I have a big quiz on Wednesday and needed to study. However, on Saturday at Whole Foods, I noticed that they had a three year aged Gouda on sale for $9.99 lb, originally $16.99 ea. I couldn’t resist. I haven’t used Gouda much, so I thought, “Why not, I can study later?” END_OF_DOCUMENT_TOKEN_TO_BE_REPLACED 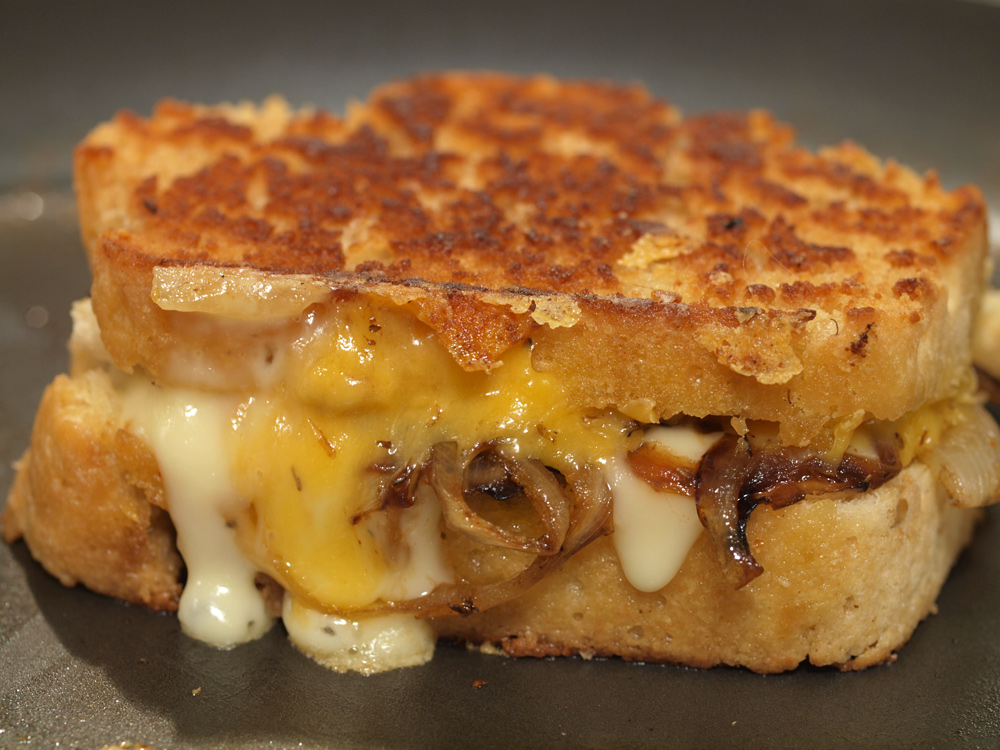 Even since I found a Grilled Beer and Cheese Sandwich recipe on Wisconsin Cheese Talk (recipe courtesy Gabi of Honest Fare), I had wanted to try it out for myself. However, I was worried about actually making the bread and in turn the grilled cheese. Up … 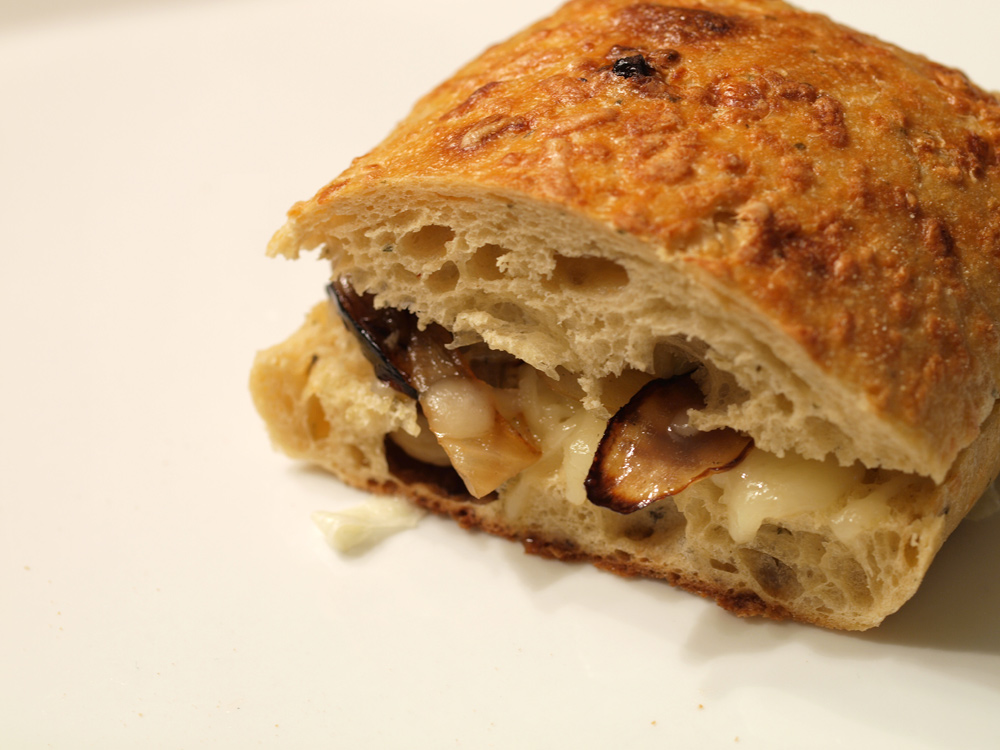 After pushing the envelope of what a grilled cheese can be, I decided to tone it down a bit and make a somewhat standard grilled cheese, featuring caramelized onions. The caramelizing process is an easy one, as long as you make sure not to burn … 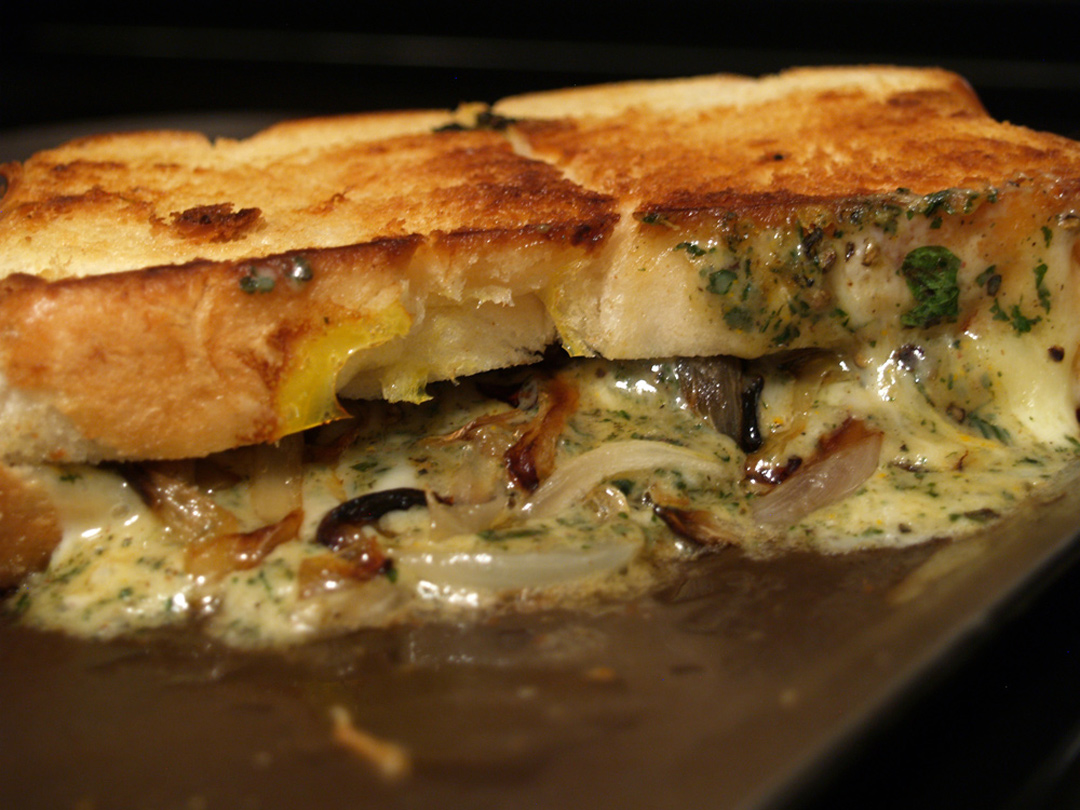 After choosing this sandwiches cheese, I needed to decide how to incorporate my crusting idea into said cheeses. I searched the Internet a bit but did not find any inspiration. I decided to go it alone. That has been dangerous in the past, but tonight, I got lucky…and had some help. Creating the basil peppercorn mixture allowed me to create a delicious grilled cheese.

This past week I spent very little time thinking about this week’s grilled cheese so when today came, I was almost out of luck. However, I had been thinking about crusting a cheese with some sort of something (peppercorns?) for awhile. Today, I put that thought into motion. I figured that I would need a soft cheese to make this happen so I immediately thought of goat cheese. However, when I was looking at the market, the goat cheese just didn’t it for me so my mind went to Brie.

I have used Brie previously, so I wanted to try and stay away from it this week, if I could. Luckily I found Chaumes cheese, which isn’t Brie but very similar to it. I am glad I did. It was smooth and creamy and had a really pleasing finish. The taste was not there at first, but at the swallow, there was a fantastic mix that I am having trouble putting into words.

Chaumes cheese is a cow’s milk cheese from Périgord (South West of France), made by traditional cheese-making processes. Translated literally, “chaumes” is French for stubble.

Based upon traditional Trappist-style cheeses, it is a rather popular cheese among modern French varieties, in particular with children. It is a soft pale cheese with a rich full-bodied flavour and smooth creamy and quite rubbery texture. Its aroma is generated by the cheese’s bright tangerine-orange soft rind. The rind appears after several washings of the crust, along with brushing with some ferments. (Wikipedia)

the other cheese: havarti

Denmark’s most popular and most famous cheese, Havarti is a traditional creamery cheese with a deliciously mild, sweet, and slightly acidic tang. With age, the buttery aroma and flavour of Havarti turns sharper and saltier, displaying hints of hazelnut.

Havarti is made from cow’s milk and characterized by a supple, semi-soft texture laced with irregular pinhole-sized eyes. Mellow, creamy, and simple, the ivory-colored table cheese can be sliced, grilled, or melted with ease. No wonder Havarti is appreciated by the youngest of children and cheese connoisseurs alike…learn more about Havarti.

I can agree with this description, especially the hazelnut part. At the end of tasting the Chaumes, I mentioned that it may have had a nutty flavor, but I could be wrong. I mentioned the same thing after tasting the Havarti, and it looks like I was on the right path. Havarti is a good cheese, but as was the case with the Colby Jack last week, this cheese takes second place.

I decided to take some peppercorns and mix them in a blender with some fresh basil, found in our garden in the backyard. I only added a very little water to the basil peppercorn mixture and we were set.

So how did I use this to crust my cheese? Well, I don’t know. I ended up not crusting but instead incorporated the basil peppercorn mixture right into the cheese itself. I used my hands, got into the cheese and kneaded it with the mixture. It ended up not looking too pleasant, but based on how the end product tasted, the look did not foreshadow the flavor. I could have included more mixture within the cheese, to give it more pepper flavor, but that is here nor there. The basil peppercorn mixture still tasted good.

I have written all of this and yet I have not mentioned the onions. While at the market today, with my sous chef, we were trying to decide what else to put on the grilled cheese besides the “crusted cheese.” The sous chef started making suggestions. Basil? Not bad, but not great. Sun-dried tomatoes? Hmmm, a definite possibility. Caramelized onions? Perfect. The sous chef had made the suggestion of the evening.

All I did to caramelize the onions was:

That was it. After that, they should begin to turn a nice brown color.

I think the reason I liked the onions so much was because of their texture. They were soft and somewhat slimy, which fit perfectly with the soft cheeses that I chose. Everything seemed to meld together and create an amazing flavor in each and every bite. Add in the crunchiness of the challah and you have yourself a winning grilled cheese. Sure, there could have been a bit more of the pepper taste in each bite, but you don’t want it too overwhelming. All of the flavors and textures just seemed to work perfectly together.

After I took the first bite of tonight’s grilled cheese, I tried to eat the sandwich as slowly as possible just so I could enjoy each bite. That is when you know you have a winner. And honestly, I think that says it all. This grilled cheese was something special, and oddly enough, the basil peppercorn mixture was something I came up with at the last minute. Go me…