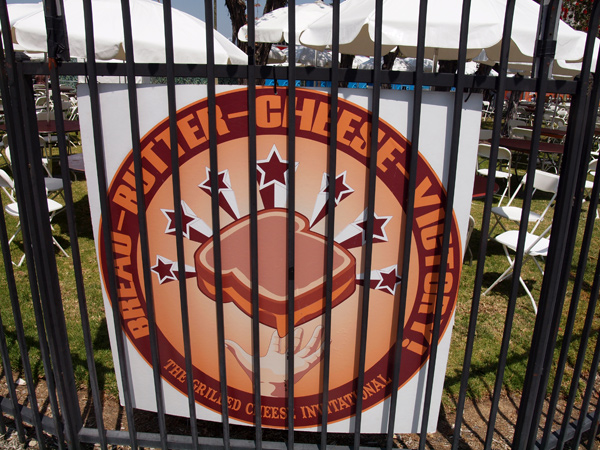 My trip to the 1st 8th Annual Grilled Cheese Invitational turned out to be as much about the grilled cheese sandwich as it was about me personally. My trip to LA, the first trip I have ever taken completely alone, taught me a lot about myself and I plan on reflecting on that new found knowledge here…as well as the Invitational.

I put a lot of preperation into going, including creating my own t-shirt and business cards, which both turned out great. I had never been to such an event but I did have high hopes. I wanted to promote the “GrilledShane” brand and learn as much as I could about the grilled cheese.

I am not sure that happened…but I am getting ahead of myself.

Lets start at the beginning, with the hotel that I stayed at in LA and which I would return to in a heartbeat.

The Millenium Biltmore Hotel, located in the heart of downtown LA, has been around since 1923, hosting the Academy Awards and many different celebrities/dignitaries. They even have a Presidential Suite that is always stocked with alcohol, whether it be during prohibition or not. I simply stumbled upon this hotel via Orbitz, and I would definitely say I did alright.

Goregeous, yes? I agree. Plus, the staff, especially the concierge James, were extremely friendly/helpful, even if they hadn’t heard about the Grilled Cheese Invitational.

I don’t want to bore you too much with random details of my trip, but I must mention Wolfgang Puck’s L.A. Bistro. Granted I did not light up the LA dining scene, but this was the best meal I had, even better than any grilled cheese sandwich that I tried.

Amazing pizza. Amazing salad. Amazing meal. Go, if you have the opportunity.

I am a shy guy. That is a fact. (I know, you are shocked, but you will be able to compose yourself soon.) It was a big deal that I, by myself, went all the way to LA. Parents were impressed. Friends were impressed. I was impressed. I had never done something like this, which is the reason I went in the first place. I wanted to spread my grilled cheese wings.

It was too soon.

As I stood in this line, I was excited with a grin on my face a mile long. However, when I entered the event, I reverted back to Shane, not GrilledShane. Since I was by myself it was very difficult to interact with random people let alone hand them a business card for some random grilled cheese site. Sure, I spoke to a couple people as I waited for a sample but for some reason, I was unable to hand them one of my awesome business cards. I was unable to go beyond the superficial.

The event was setup in two parts. In one section were all the vendors selling grilled cheese sandwiches, including The Grilled Cheese Truck, The American Grilled Cheese Kitchen, Greenspan’s Grilled Cheese and The Point/Campanille/Tar Pit. Tillamook Cheese, Boulder Canyon and Izze were also in this area giving away free samples. If you were of age, there was a beer garden. Anyone who paid the $10 (or $15) admission fee could mingle throughout this area.

Because of the crowds and my really poor timing, I ended up only trying the Burreta, from The Point / Campanille / The Tar Pit. It looked really good but unfortunately it did not taste really good. The lines for other vendors were 50+ people deep, especially the Grilled Cheese Truck. If I did in fact want to try at least one sandwich from each “truck,” I may still be waiting there. This was one of my complaints with the Invitational although I am not sure there is an easy fix of this issue other than letting less people in which does not make good business sense.

The other part of the event was the Judging area. In order to be a judge, I needed to sign up online prior to attending the event and bring in my “judging membership card.” I did that and was given a wristband allowing me to judge any competing grilled cheese sandwiches while other people just had to hope they would be able to get through. (They never could.)

As you can see in the photos above, the judges were separated from the competition/cooking area by a rail/gate. Each competitor only had 20 or so plates with scorecards attached, allowing them to make up to 20 sandwiches depending on how they cut each sample. When someone had a sandwich coooked and ready to be eaten, they walked up to the “gate” and yelled, “Who wants cheese?” The loudest response was rewarded with a grilled cheese sandwich to judge. Me, a shy guy, really never wins in contests where you need to be loud. That just isn’t me. Therefore, at some places, I stood for 5-10 minutes without ever receiving anything to judge. I am not sure if this is the Invitational’s fault for setting it up this way or for me not screaming loud enough. Honestly, I am not sure how else they could do it. I just know that it didn’t work for me and so I ended up frustrated only being lucky enough to judge a couple sandwiches.

The other issue I had with the competition was the fact that I had no idea what was in each sandwich unless I asked. And when I did ask, some people listed so many ingredients that I quickly became lost. I had taken a mini-notebook to take notes and get some inspiration. I used 1/2 a page and then simply gave up because I couldn’t keep up with all the ingredients.

I only saw one person with a sign saying exactly what type of grilled cheese they were making. Genius idea! I only wish that other people followed their lead. This would not have only helped my note taking, but with me also keeping Kosher, it would have helped me know which sandwiches I could or could not eat. (This would of course also apply to people who are vegeterians.)

When I was younger and much shorter, I didn’t like crowds. Not much has changed, except for my height. Well, actually, I don’t mind crowds now, its just when you are one in a sea of thousands, it is kinda lonely. And it is rather hard to walk up to even one of them and say, have you heard of my grilled cheese blog?

Overall, I am really glad I went. This Invitational allowed me to take a vacation out to LA. When else would I have an excuse to take 4 days off of work and go out West? Not anytime soon, that is for sure. I was able to stay in an awesome hotel, see awesome sites and eat some great food.

However, I put too much pressure on myself, as a person, which simply did not pan out. I ended up leaving 10 cards on random tables and returning with 40 business cards. My shirt? Didn’t really stir any conversations. The event was too large for me and my personality. I can, however, understand that some people did in fact have a blast.

Will I attend next year? It all depends on two things:

If the answer to either of these questions is yes, then yeah, I may return. If not, then I may just stay home and have my own Grilled Cheese Invitational here in Cleveland. I have a year to decide…

Filed Under: my take
Preparing for the 1st 8th Annual Grilled Cheese Invitational
No Sunday Dinners, It Is Mother’s Day