The History of the Grilled Cheese Sandwich 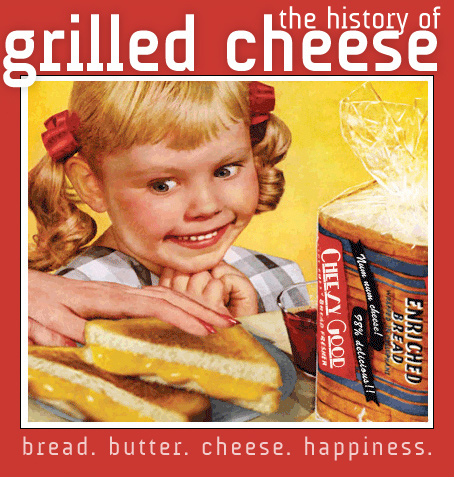 Since the history of the actual grilled cheese sandwich is limited, let me start with the history of just the sandwich. As is the case with most ancient foods, pinpointing a date or time when something is created is difficult. In terms of the sandwich, there are references to bread being eaten with other food in the Neolithic when the Jewish sage Hillel the Elder “is said to have wrapped meat from the Paschal lamb and bitter herbs in a matzo (or flat, unleavened bread) during Passover.” (Wikipedia)

The first true reference to the word sandwich came on November 24, 1762 when Edward Gibbons, an author, scholar, and historian, wrote the following in his journal:

“I dined at the Cocoa Tree….That respectable body affords every evening a sight truly English. Twenty or thirty of the first men in the kingdom….supping at little tables….upon a bit of cold meat, or a Sandwich.”

The sandwich was named after the 18th-century English aristocrat, John Montague, 4th Earl of Sandwich. According to gossip and rumor, Montague was said to enjoy this type of food because it allowed him to play cards/cribbage without getting dirty from eating meat with his bare hands. However, this rumor was debunked by John Montague’s biographer, N. A. M. Rodger. It was most likely because the sandwich allowed him to eat at his desk while working.

Also in 1762, it is said that, “cooks at London’s Beef Steak Club, a gentlemen’s gaming club held at the Shakespeare Tavern, invented the first sandwich.” Montague frequented this restaurant, gambling often while there, and refusing to leave the table to eat on multiple occasions. During one of these such occasions, Montague ordered his valet to bring him meat tucked between two pieces of bread. What the valet returned with was salt beef between two pieces of toast. People in the restaurant then began ordering “the same as Sandwich.”

In 1840, the sandwich finally came to the United States. Englishwoman Elizabeth Leslie had a recipe for ham sandwiches in her cookbook Directions for Cookery, in which she suggested it be used as a main dish. (WhatsCookingAmerica.net)

According to The Food Timeline, some sort of cooked bread and cheese were ancient foods and in included Roman cookbooks. However, nothing is known about the grilled cheese sandwich between ancient times and the 1920s. Inexpensive bread and processed cheese were first available in the 1920s, allowing the common person/family the first opportunity to create a “grilled cheese sandwich.” At the time, the sandwich was cooked open faced with grated “American” cheddar cheese. With time, the sandwich was cooked “closed” and we had a true sandwich as we know it today. The reason for the top piece of bread? Also according to The Food Timeline, adding the second slice of bread “was the the least expensive way to make a popular sandwich more filling.”

One question you may have is what is the difference between a toasted cheese sandwich and a grilled cheese sandwich? The Food Timeline has great linguistic answers. The site also notes that “toasted cheese” recipes were found in cookbooks prior to “grilled cheese” sandwiches. Oddly enough though, the title of the sandwich did not necessarily correspond to the instructed method of cookery.

Each of these American recipes below would produce something similar (but not exactly) to modern “grilled” cheese sandwiches:

Now, children of all ages devour grilled cheese sandwiches in school cafeterias and off of restaurant kid’s menus.

The grilled cheese sandwich has become so ingrained in our culture that in 2007, Kraft decided to use it to revive their Kraft Singles brand.

The primary goal of the spending increase is to persuade consumers that Kraft’s venerable products can meet their changing needs. A case in point is Kraft Singles sliced cheese; Kraft will devote a campaign that begins today to the glorification of the grilled cheese sandwich.

The television, online, print and retail campaign carries the upbeat theme “Have a happy sandwich.”

“In marketing-speak, we call it the ‘end dish,’ as in what’s the dish the product ends up in,” said Jane Hilk, vice president for marketing at the cheese and dairy business unit at Kraft in Glenview, Ill.

The Pursuit of Happiness in a Grilled Cheese Sandwich

I would like to thank The Daily Spud and the post Spud Sunday: Of Potatoes And Potato Eaters for the inspiration for this entry.

7 thoughts on “The History of the Grilled Cheese Sandwich”