My Submission to NPR’s “Save the Deli” Feature 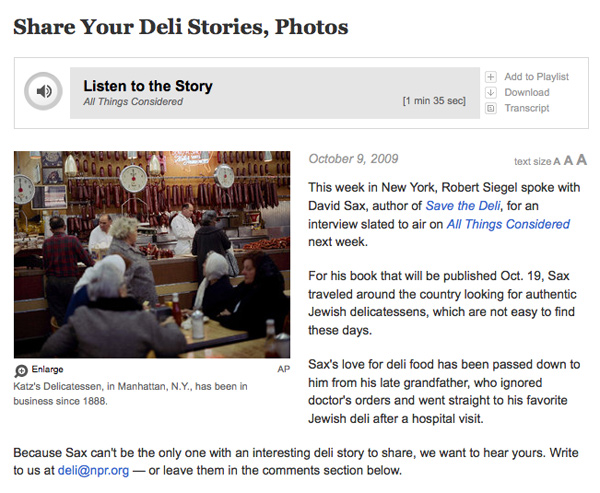 Ever since 2002, I have been a big fan of NPR. How can you not be?! I have a 45 minute commute so I am able to listen for awhile and hear some great stories on both Morning Ediition and All Things Considered. After reading, and tweeting, the New York Times article At Jewish Delis, Times Are as Lean as Good Corned Beef, I was intrigued to hear that NPR would be talking about the same book. Not only will they be speaking to the author of Save the Deli, David Sax, but they will also be sharing America’s deli stories. Pretty awesome if I do say so myself.

When I hear these requests, I always say I am going to write my story, hoping to hear it on the radio. However, I never do. I am never that motivated. With this story, it is different and I am motivated. I, in my opinion, have a great story about introducing college buddies to a traditional and revered Jewish deli in the area. There have been five visits and each time we have traveled to Corky and Lenny’s, no matter the number of people. It has become a mainstay of their visit and one that I don’t think will change. Whenever visit number six happens, I can assure you will be headed back to Corky and Lenny’s for Saturday lunch.

Here is my submission to NPR’s “Save the Deli” feature, which I hope to be shared with millions on many NPR stations.

In 2001, I was accepted to the University of Cincinnati’s School of Design, Art, Architecture and Planning. During the next 5 years of  classes and design projects, I met people that have become some of my best friends. After graduation, we spread out throughout the Eastern U.S., with a select few getting married. Even with the distance, and marriage, we still try to visit each other as much as possible, considering the circumstances.

Rewind a few years, as far back as I can remember, to a time when my family took me to Corky & Lenny’s, a Jewish deli in an Eastern Cleveland suburb, for the first time. This place, in my opinion, is a great deli, all the way down to the not so friendly waitresses, crisp pickles and enormously thick potato pancakes (latkes). Granted, I am not much of a deli person, I order breakfast, but its reputation speaks for itself. And the fact that it has been a mainstay in this city for as long as I have been alive as well as my father. Every time my childhood best friend visits home, him and his wife make a point to stop at Corky & Lenny’s for a great corned beef sandwich, even if they are only visiting for 24 hours.

Now back to the recent past, 2007, when I decided to create an event entitled Welcome to Solon, OH, where I would invite my college friends to my hometown, a suburb of Cleveland, for the weekend. They had never been, so I had to show them a good time. When planning the event, I needed to choose a restaurant that was Cleveland to the core. That place was of course Corky & Lenny’s. (Plus, with me being Jewish, highlighting a Jewish restaurant/deli didn’t hurt either.) The restaurant, including the varied and unique menu, pickles and waitresses, became an instant hit living up to its reputation. There have now been five different “Welcome to Solons” and for each one, every Saturday at lunchtime, we are always at Corky & Lenny’s munching on some sort of deli food.

Wish me luck. I will update this post, and Twitter, with any updates. If nothing else, I am glad I am able to share this story, with you.

P.S. I must add, my friends have made our trips to Corky’s as much as the restaurant. They have taken to it like a moth to a flame and embraced it like their own. If it weren’t for them, this story wouldn’t be possible. Thanks guys!

Filed Under: my take
Why do you blog [about food]?
Google Alerts adds 100% more grilled cheese to GrilledShane.