My Visit to Lake Erie Creamery

When you visit a creamery, regardless of whether they milk their own animals or not, the last thing you think you will come into contact with is an old-time office building in the heart of an urban city. However, that is exactly where Lake Erie Creamery is located and they are more than making it work. Sure, they would prefer a larger space, and may find one sooner rather than later, but this small operation is firing on all cylinders.

I had heard of Lake Erie Creamery here and there but only first tasted their cheese when I created my Local Lunch Series and experienced their Croquis fresh cheese. I was able to meet Brian Moran, owner of Lake Erie Creamery, at a recent Ohio Cheese Guild/GrilledShane event, but it was busy and we were only able to speak briefly. Eventually, we connected on Twitter and I was invited to visit the creamery. Once my schedule opened up, I drove down to Fulton Road in Cleveland with the sous chef in the passenger seat.

With knowing that the creamery is located within urban Cleveland, I wasn’t expecting some over the top operation, but still, I wasn’t expecting something as compact as what I walked into. It must be noted, Lake Erie Creamery doesn’t make simple, basic cheeses that is just like everything else on the market. Brian and his very small staff (he only has a couple of other staff members, with only one being full-time) make hand made, small batch cheese that is absolutely delicious. It more than stands up with the best of the cheeses from Ohio and around the United States. And all done in a space that is no bigger than my kitchen and family room put together.

From the minute I walked into Lake Erie Creamery, it was an eye opening, educational experience. There are so many little things that go into cheese making. Some may see it as an easy process, but I hate to break it to you, it most definitely isn’t.

Our tour started with education on milking cycles. According to Moran, From March to September, cows mainly, but also goats and sheep, personally utilize the fat and nutrients that their body is producing to survive the heat, so therefore, most of that “good stuff” doesn’t make it until the milk, requiring more to be used. On the flip side, from September to March, the animals don’t need as much fat and nutrients, and therefore, it makes it into the milk, providing a great basis for amazing cheese. Also, during the September to March time frame, the animals produce more milk than during the warmer months.

After learning about milking cycles, we moved into the second room of Lake Erie Creamery; the room where all of the cheese making occurs. There, we saw the small batch pasteurization machine (below) and its corresponding pasteurization thermometer (above). 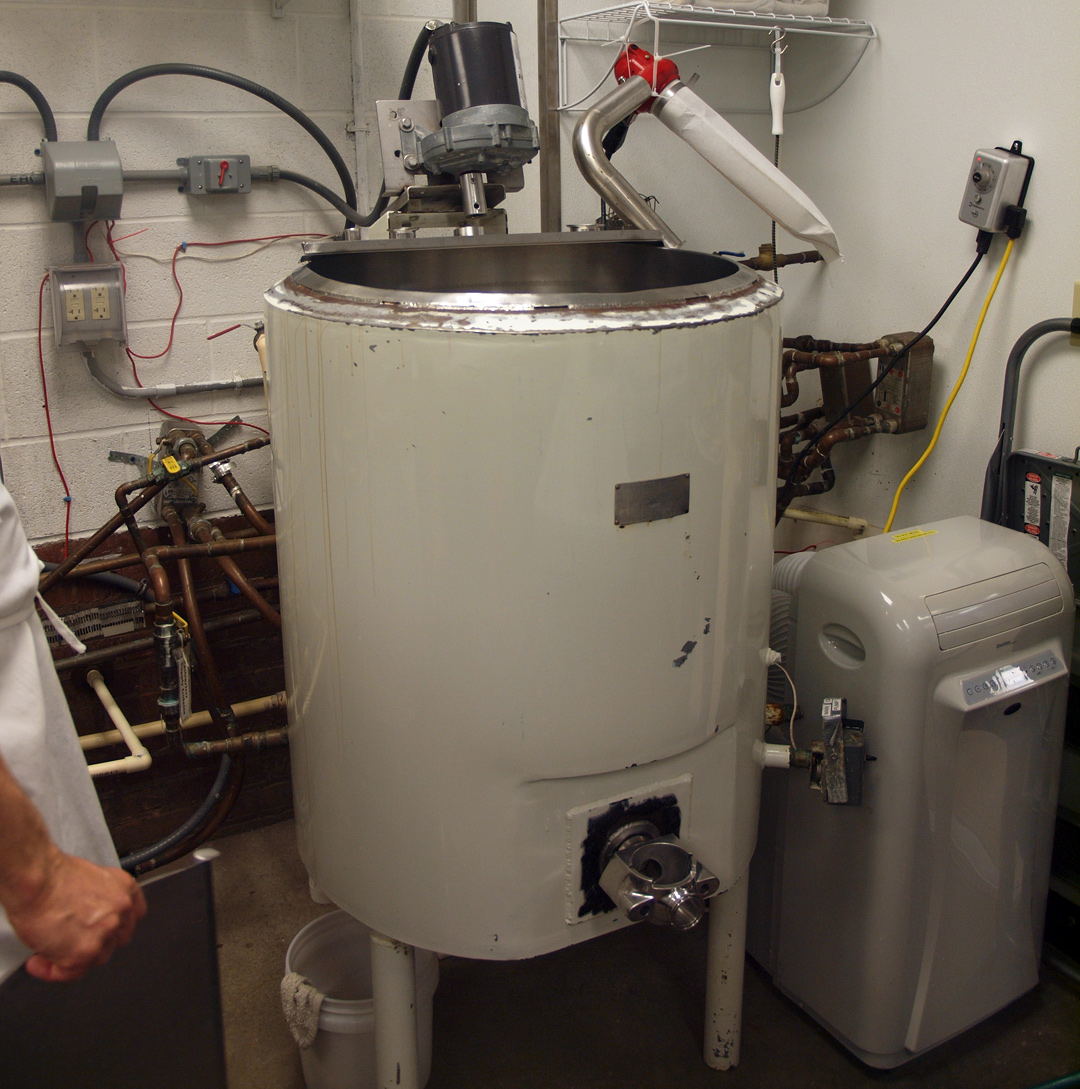 According to Moran, even though small batch pasteurization takes longer, it still leaves most of the flavor in the milk. Some of the bigger cheese makers choose to do flash pasteurization, normally at really, really high temperatures, allowing them to move through larger amount of product at a quicker pace. However, Moran says that this process lessens the quality of the milk and in turn the cheese.

I didn’t know what cheese making we would see while at Lake Erie, if any, but thankfully, we arrived just in time to see Moran and his only full-time employee, Leah, make cow’s milk Cracked Black Pepper Feta. Although this process seemed simple, from what we saw, it is most definitely time intensive.

In the photo above, you can see the curds and whey have already been separated. Now, it was time to take the curds out and start making Cracked Black Pepper Feta. Some of the whey is put aside to make a brine (whey + salt) that the fully formed feta would sit in for approximately a month. 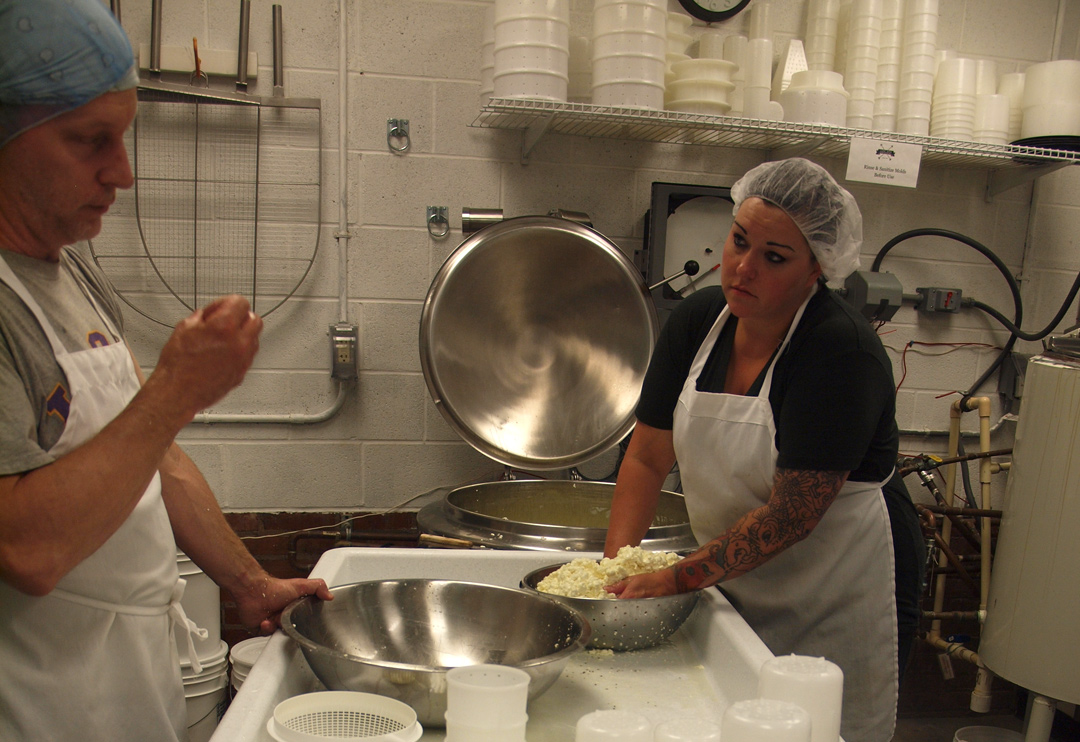 With the small strainer shown in the left side of the above photo, the curds were transferred to the straining bowl. From there, the curds are strained for a pre-set amount of time, to allow more whey to be drained out.

Once the curds are drained, they are transferred to a mixing bowl and cracked black pepper is added to the curds.

As you can see, when Lake Erie Creamery says their cheese is handmade, they mean it is truly handmade. Sure, if possible, they could use machinery to expedite some of the process, but that could take away from the flavor and texture of the final product. Therefore, everything that can be done by hand, is, including mixing the curds with the cracked black pepper.

In order to complete the process of making Cracked Black Pepper Feta, the mixture is placed in molds and then in the brine. It is aged in the brine for approximately a month. At that point, it is packed right at Lake Erie Creamery and taken to farmers markets or shipped off to retailers around the area.

When Brian Moran took over Lake Erie Creamery approximately a year and a half ago, his focus shifted from wholesale to retail. With that, he had to improve the retail packaging from the ground up, both in design and functionality. The final product, seen above, is gorgeous. Not only will it stand out at farmers markets and grocery stores, but it will keep the cheese fresher longer.

While observing how Cracked Black Pepper Feta is made, I also noticed fresh chevre draining in multiple places around the room. As you can see, Moran utilizes two methods, although he prefers one. Moran believes that the hanging method places too much pressure on the cheese and in turn drains too much liquid. Therefore, Moran tries to drain the chevre in pans as much as possible.

Cheese making is a very interesting process, yes. Sometimes, though, waste removal can be just as intriguing. At Lake Erie Creamery, the whey that is drained during the cheese making process isn’t simply discarded. It is drained into a bucket, as seen above, and then pumped out back where it is stored and taken to Quasar. Magically, I can only imagine, Quasar turns the discarded whey into electricity, among other things.

As the tour and cheese making process finished up, Moran wanted to give me some cheese for the road, but unfortunately, it was extremely hot out (90s +) and the folks and I were headed to the Indians game (that was eventually rained out) so I had to decline. However, I will be returning to Lake Erie Creamery so I can barter some cheese for a copy of my cookbook. I am pretty sure that will be a very successful trip.

To be able to personally see the cheese making process is awesome. To be able to bond with the people who actually make the cheese is amazing. Within the past year or so, I have been able to meet some wonderful people in the cheese industry and that most definitely includes Brian Moran. Moran was very welcoming and had no problem with me taking pictures or peppering him with questions as he tried to work. I know that the sous chef and I learned a lot. I definitely hope that my tour of cheese makers and and education on” all things cheese” never stops and eventually takes me down the full-time career path. Thank you Lake Erie Creamery for a great visit.

1 thought on “My Visit to Lake Erie Creamery”