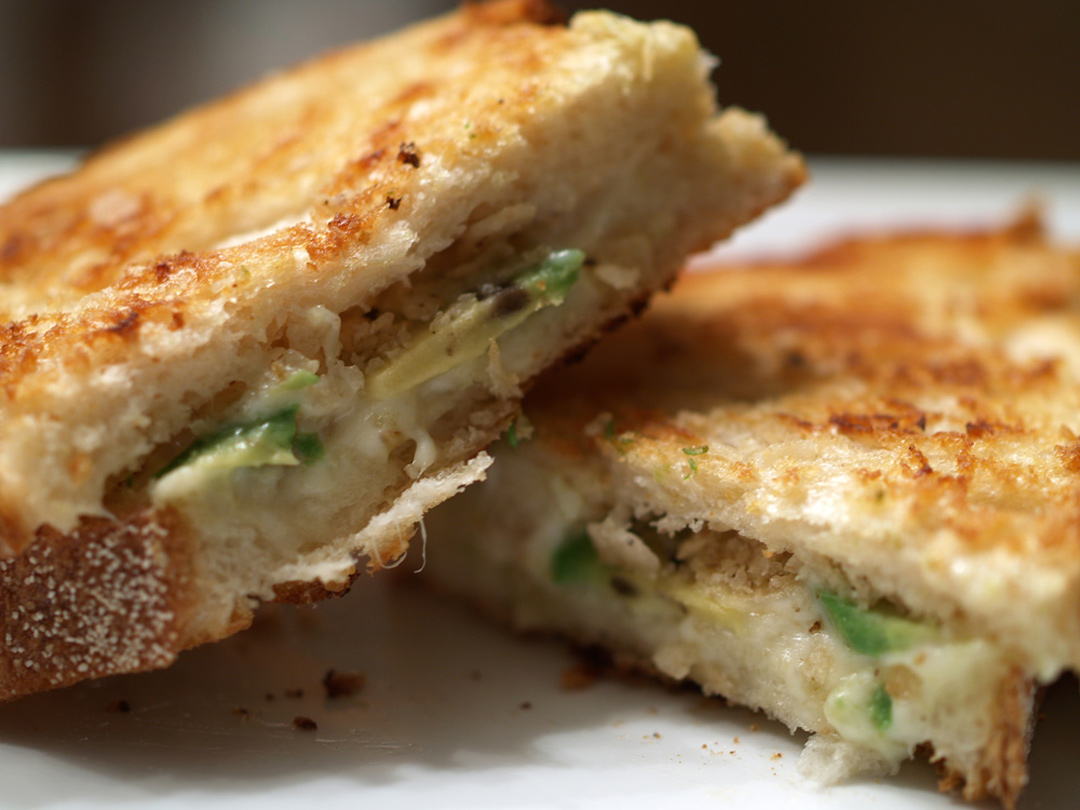 Awhile back, my great aunt bought us some sort of something from Williams-Sonoma that we would not use. We originally exchanged it for a panini press but soon realized we wouldn’t really use it as often as hoped. (I am the only sandwich-aholic in the family.) That press was then exchanged for a pair of pans, one of which was a grill pan. This pan was used for this grilled cheese and hopefully the awesomeness can be seen in the photos. The pan browned/crusted the bread perfectly and allowed for a nice crunchy on the outside soft on the inside grilled cheese sandwich. This pan will be used for all future Sunday Dinners.

The taste of Fontina is dependent on its country of origin. The cheese I purchased is the American version of Fontina so it is more on the mild side with a smooth, creamy texture. As is the case with most cheeses, I really enjoyed this one. If the the particular country of origin is Italy, it has a more pungent flavor.

All fontinas must be made from cow’s milk. As a general rule, the milk is usually raw, and the best fontina cheese is made from milk which is as fresh as possible. The interior of the cheese tends to be a rich straw yellow to pale cream in color, and it is classically riddled with very small holes. The milkfat content is usually around 45%, so the cheese tends to be very rich and creamy, with a nutty flavor which gets stronger with aging. The cheese also melts very well, and it is sometimes included in fondue and similar dishes. (WiseGeek.com)

Also, what do people normally eat with tortilla chips? Either salsa or guacamole (mostly). Since I had already created a  salsa on a grilled cheese and did not feel like doing it again, I went down the avocado route.

I have put guacamole on a grilled cheese as well, so I decided to go simply with sliced avocados. The avocados were, in my opinion, the only weak part of the grilled cheese. When it contributed to the overall flavors, it was perfect, but there were times where the avocado was a bit chewy and that is when there were issues. The chewiness did not ruin the grilled cheese by any stretch of the imagination, it would be just something to pay attention to in the future.

Just to add a little citrus flavor to the grilled cheese, I included some fresh lemon juice on top of the avocado.

This crusty Italian bread from Whole Foods had a unique taste that was very yummy. As is the hope with most breads, this one was crunchy on the outside with a great, soft texture on the inside. Although I love going to local places for ingredients, after eating this crunchy Italian, I will no longer rule out Whole Foods.

This new pan truly made a huge difference in how this tortilla chips grilled cheese was cooked. The cheese was melted perfectly and the bread was golden brown making a perfect grilled cheese. The last and only other time I used the same pan was when I created my most popular sandwich, the garlic crusted sourdough grilled cheese. I would say this pan is a winner and it will be the only one I use from here on out.

The flavors inside the tortilla chips grilled cheese, minus a chewy avocado every once and awhile, melded together to create an awesome sandwich. Unfortunately, since I took a bit of time to write about this grilled cheese, I don’t remember the exact taste, I only know it was good. This was definitely a winner and one that I would recommend everyone try.