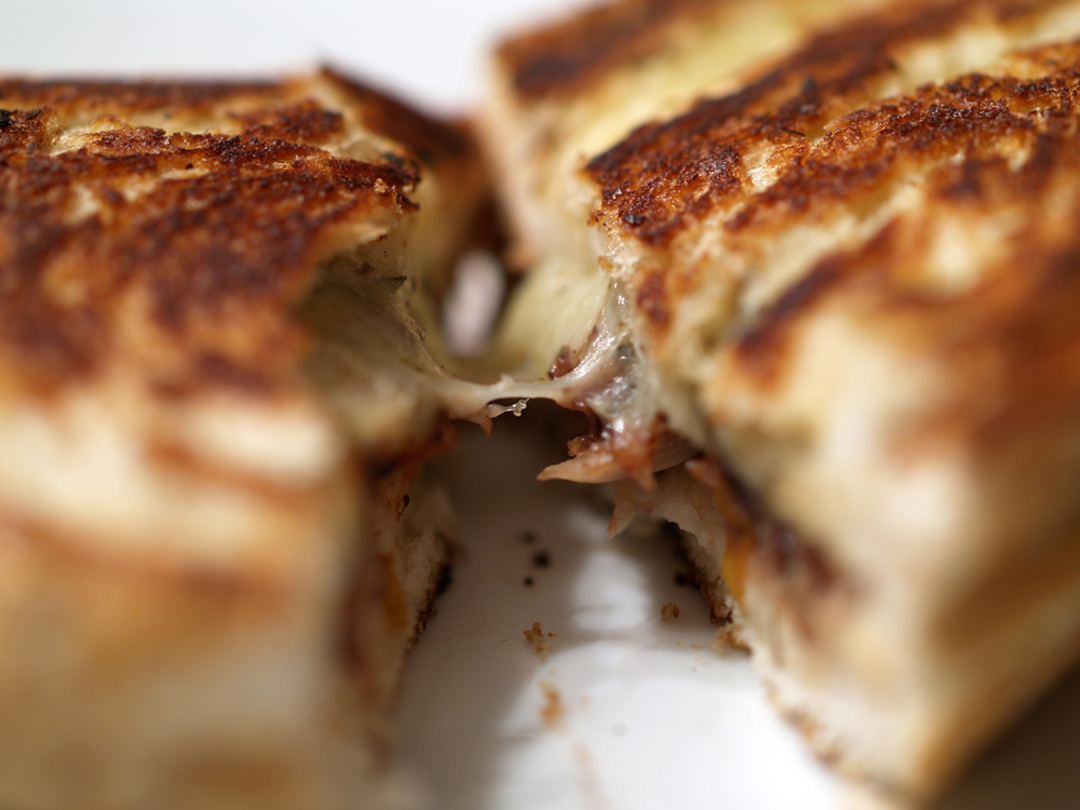 Yes, there has been a slight delay in writing about this grilled cheese (and the one after, a crushed tortilla and avocado sandwich). I do apologize but I have been busy finishing up my last few days as a webmaster and diving right into the food industry. Yesterday was my last day with a company and routine I had known for 3+ years. Now, I am full-time employee of the food/restaurant business (aka Nordstrom) and I could not be more excited. I believe I am meant to be out of the office and in the restaurant, back OR front of the house. Right now Nordstrom, later the world (or just my own restaurant). But before I conquer the world, it is time to recreate Macheesmo’s Tapenade Grilled Cheese.

Swiss is a standard cheese; one that I enjoy very much but know little about. Why not learn together?

Hailing from Switzerland and traditionally named for its region of origin, the term “Swiss cheese” is no longer limited to that part of the world. Many varieties of the pale yellow, nutty-flavored cheese are now produced all around the world.

Swiss cheeses from Switzerland, like the famous Emmental and Gruyere, are typically crafted of unpasteurized, raw milk. Swiss cheeses produced in the United States, like Aged, Baby, and Lacy or Lorraine Swiss, are made from pasteurized cow’s milk.

Aged Swiss is a strong, sharply flavored cheese. Its texture is firm compared to the other varieties. Both Baby and Lacy Swiss are semi-soft with a relatively milder flavor. Baby is made with whole milk, and Lacy is made with low-fat milk.

Swiss cheese hues range from a creamy ivory to a deeper yellow. Its flavor, often described as nutty, varies from very mild to quite sharp.

One question people often have about Swiss cheese is how it gets its holes. Actually, these holes are technically called “eyes,” and they are formed by microbiological activity. There are three strains of bacteria used in the production of Swiss cheese; one of the bacteria strains gobbles up the lactic acid that the others produce, emitting carbon dioxide in the process. This emission makes bubbles, which in turn forms the eyes. The speed of the bubbling process – and the size of the eyes – can be impacted by acidity, curing time, and temperature. (ProfessorHouse.com) In my hunt for grilled cheese recipes/news, I found Macheesmo.com and his Tapenade Grilled Cheese (pictured above). The minute I saw the grilled cheese, I knew I wanted to recreate it, even if I am not the biggest fan of olives. I had set out to create this grilled cheese for a couple of weeks but only did I have the chance to do so on January 24. Sure, I switched it up a bit, Swiss instead of Mozzarella, Italian instead of sourdough, fresh basil for dried basil, but I believe both of our goals were the same: to make one kick ass grilled cheese sandwich.

In order to make the tapenade, I did as I was told and roasted the garlic. This is a simple process (brush olive oil over a headless head of garlic and then place in oven for ~20 minutes) that even I did not screw up. I have in the past left the garlic roasting for too long but this time, it came out perfectly.

I am not sure how Macheesmo made his sundried tomatoes, nor am I sure how I made mine. For this particular ingredient, I let the sous chef take over as she is a self professed sundried tomato expert. (Can’t you tell by the awesome looking tomatoes above?)

Once the tapenade is mixed together (olives + sundried tomatoes + roasted garlic), you have completed the most difficult steps. Now we just need to find the bread…

Here is a definition for Vienna bread from encyclopedia.com:

Loaf with a very crisp, thin, highly glazed crust, with cuts on the upper surface, coarser than ordinary bread and with gas holes. It is baked in an oven which retains the steam.

Now that we had the tapenade made and the bread chosen, it was simply time to make the grilled cheese…