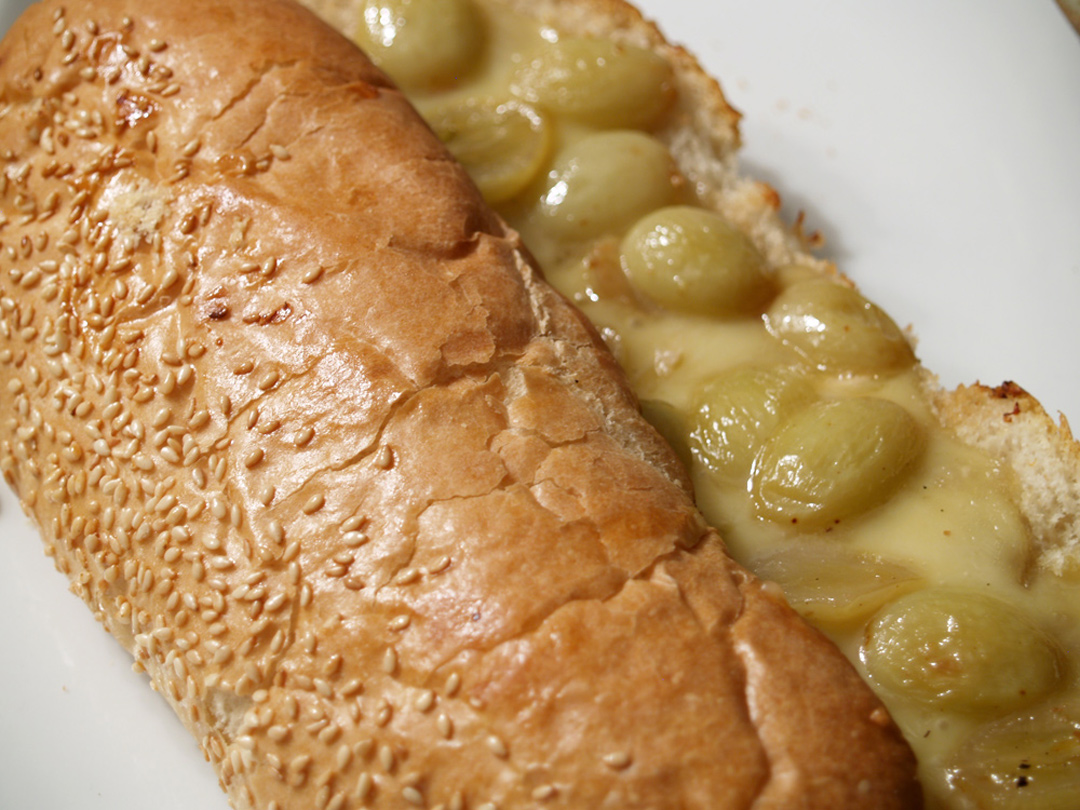 Since I knew I would be using the Brie for this particular grilled cheese, I decided to go sweet. Via GroupRecipes.com, I found a Brie and Grape grilled cheese recipe that was perfect. Ideas started popping out of my head including a grape and strawberry sandwich, but I decided to go with only grapes.

On December 3rd and 4th, I kept seeing the following on my local Whole Food’s Facebook page:

Having never even heard of this type of Brie, my interest was piqued. After work on Friday, December 4, I headed to my local Whole Foods, where there were just about 4-6 packages left. Prior to buying, I tried the cheese with some sort of preserves. I could not tell if I simply liked the preserves and/or the Brie, so I went ahead and purchased the two packages.

That evening, my father and I tried the Brie and we were both impressed. It had a great, smooth texture and subtle Brie flavor. At that point I knew I would be using this for a grilled cheese. Luckily, we kept one package unopened and it stayed fresh until this past Sunday. There was some worry, but the cheese survived.

Whole Foods provides this information about the cheese:

Our 2009 Holiday Exclusive Brie comes from a co-operative of 700 farmers in Normandy, France. Normandy is a lush area of rolling hills that produce very fertile grasses and the cows that graze on these grasses produce high butterfat milk.

Our holiday Brie is unique in that it contains 60% butterfat, a formula customized especially for Whole Foods Market. This butterfat content imparts full and complex flavors to the cheese, resulting in a rich, buttery mouthfeel and herbaceous flavor. It’s also produced using a traditional slow pasteurization process and no growth hormones, such as rBST, are given to the cows.

I am not sure if this particular Brie is still available, but if it is, I would recommend purchasing it to eat by itself or to feature it in a grilled cheese.

I decided that I was going to start by sauteing the grapes in sweet butter, salt, pepper and water.

Upon smelling the grapes, I noticed that I either put too much cracked pepper or the grapes really had a kick to them and I began to worry.

Thankfully, the sous chef was quick on her feet and told me to add some sugar to sweeten the mixture and minimize the pepper. Great idea. The only problem was I still smelled the pepper. I added more sugar. Same problem. Then, again thanks to the sous chef, I added a nice amount of brown sugar. The pepper was still there, slightly, so we moved on hoping somehow the pepper taste would disappear. We ended up being very lucky.

Leftover in the pan was a mixture that could not simply be discarded into the sink. I decided that that juice would be spread over the bread and then all the ingredients would be piled on top. Yum!

Not much to say about the bread other than it was the perfect fit for this delicious grilled cheese.

In some grilled cheeses it is great to taste all of the pieces individually. That was not the case with this grilled cheese sandwich. The grapes and Brie cheese melded into one amazing taste placed between two crunchy halves of Italian sesame bread. My father loved it so much that he made sure to have the leftovers for his lunch the following day.

In my search for inspiration for this grilled cheese sandwich, I stumbled upon Macheesmo.com‘s Pesto and Brie Grilled Cheese. Ignoring the fact that this sandwich looks delicious, I noticed at the end he rated cheesiness, bread and fillings. I found this to be totally awesome and thought it would be a nice addition to my individual ingredient grades. With Mr. Macheesmo’s blessing, I will be “borrowing” his idea tonight and for all future grilled cheese sandwiches. (Since I grade the bread at the beginning of each entry, as an ingredient, I will leave it out here.)