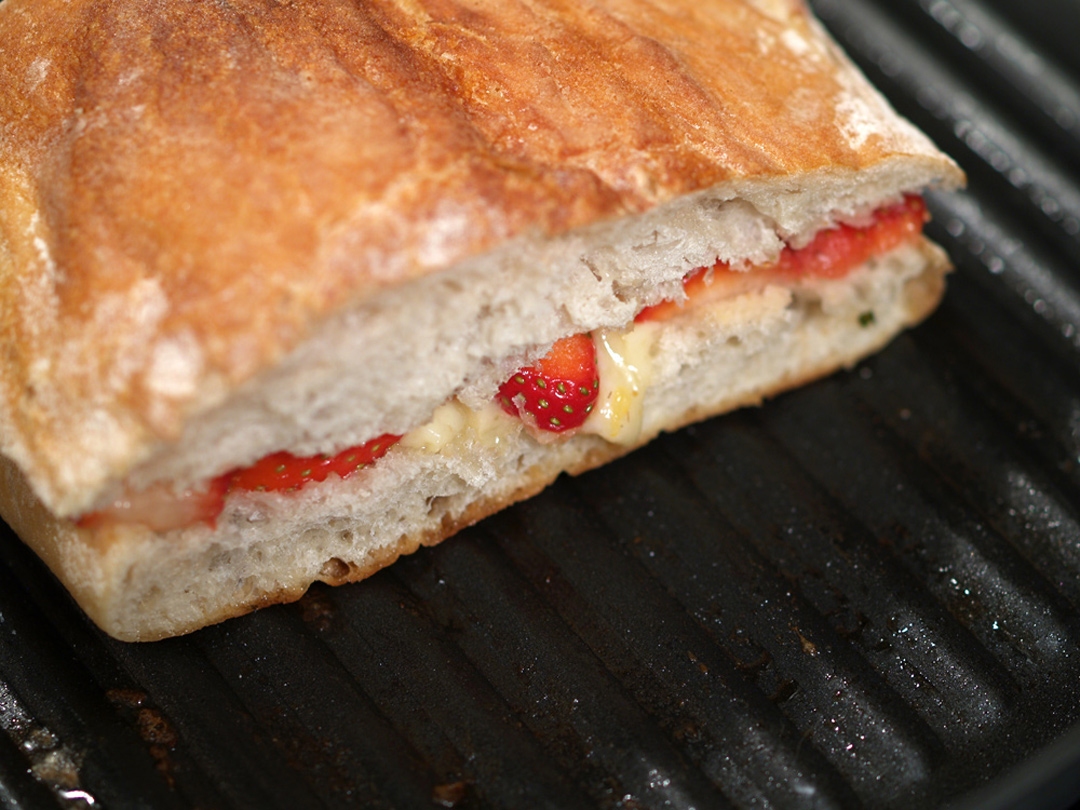 Brie is often paired with sweet foods so it was a no-brainer to include it in a strawberries and orange vinaigrette grilled cheese. This Brie was pretty standard and very yummy. As you will see, it worked well with the grilled cheese.

How did “real” Brie cheese come about in the first place? Well, according to cheese experts, producing Brie cheese started in the French province called, not surprisingly, Brie – a town 60 miles from Paris!The oldest recorded evidence of its existence was found in the chronicles of Charlemagne. The Emperor at the time, tasted the cheese in the city of Brie around the year 774 BC. And here’s another interesting tidbit about Brie cheese… Louis XVI’s last and dying wish was supposedly to have a final taste of Brie.

It is sometimes called Brie de Meaux and is considered one of the most popular of the 400+ cheeses from France. Brie de Meaux’s popularity can be attributed to a competition that took place around 1814. During a Vienna Congress, an argument broke out regarding which country made the best and finest cheese.

As a result, a Frenchman by the name of Talleyrand, suggested a competition between the different countries and their national cheeses, as he was convinced that France would win. And of course, they did! Brie de Meaux was the winner and became known as the “King of Cheeses” and as you can imagine, instantly became an overnight success that swept Europe and has retained that distinction ever since. (ezinearticles.com)

Last week when I was staging, I was treated to a grilled cheese that included portobello mushrooms tossed in balsamic vinaigrette. I began to think why not toss strawberries in an orange vinaigrette?

With that idea tossing around in my head, I needed to find a recipe since I have never made a vinaigrette let alone an orange one. Google of course helped me out and I stumbled upon a blood orange vinaigrette recipe.

Since I only had some ingredients and did not need 4 servings worth, I edited this particular recipe just a bit. This is what I ended up with:

Instead of using store bought orange juice, I went ahead, with the assistance of the sous chef and her tools, and made fresh squeezed orange juice. I believe this really enhanced the recipe and allowed more control over the flavors. In the future, I may even try different oranges in this recipe. I tried a blood orange at Whole Foods but did not think it was anything special so I stuck with a standard orange. (Are you a fan of blood oranges? If so, let me know in the comments.)

The choice for bread was between ciabatta (above) and a sourdough boule from Whole Foods. I was leaning towards the sourdough (the sous chef was leaning towards the ciabatta) since I thought it would be heartier and hold up more to the cheese and strawberries. The cheese monger told me to go with the ciabatta. He though the flavors of the ciabatta would work perfectly without overpowering the grilled cheese, which the sourdough might have done. Although the bread started out soft and “weak” it cooked perfectly, becoming crunchy and a great pocket for the grilled cheese sandwiches ingredients.

I am a big fan of texture, especially a crunchy texture, when it comes to grilled cheese sandwiches and this sandwich definitely had it. As already stated, the ciabatta really was a perfect bread for this grilled cheese. It was crunchy on the outside but still soft on the inside. It really did grill very well.

P.S. Happy belated Valentine’s Day to everyone out there. Hope everyone had a great day and weekend!