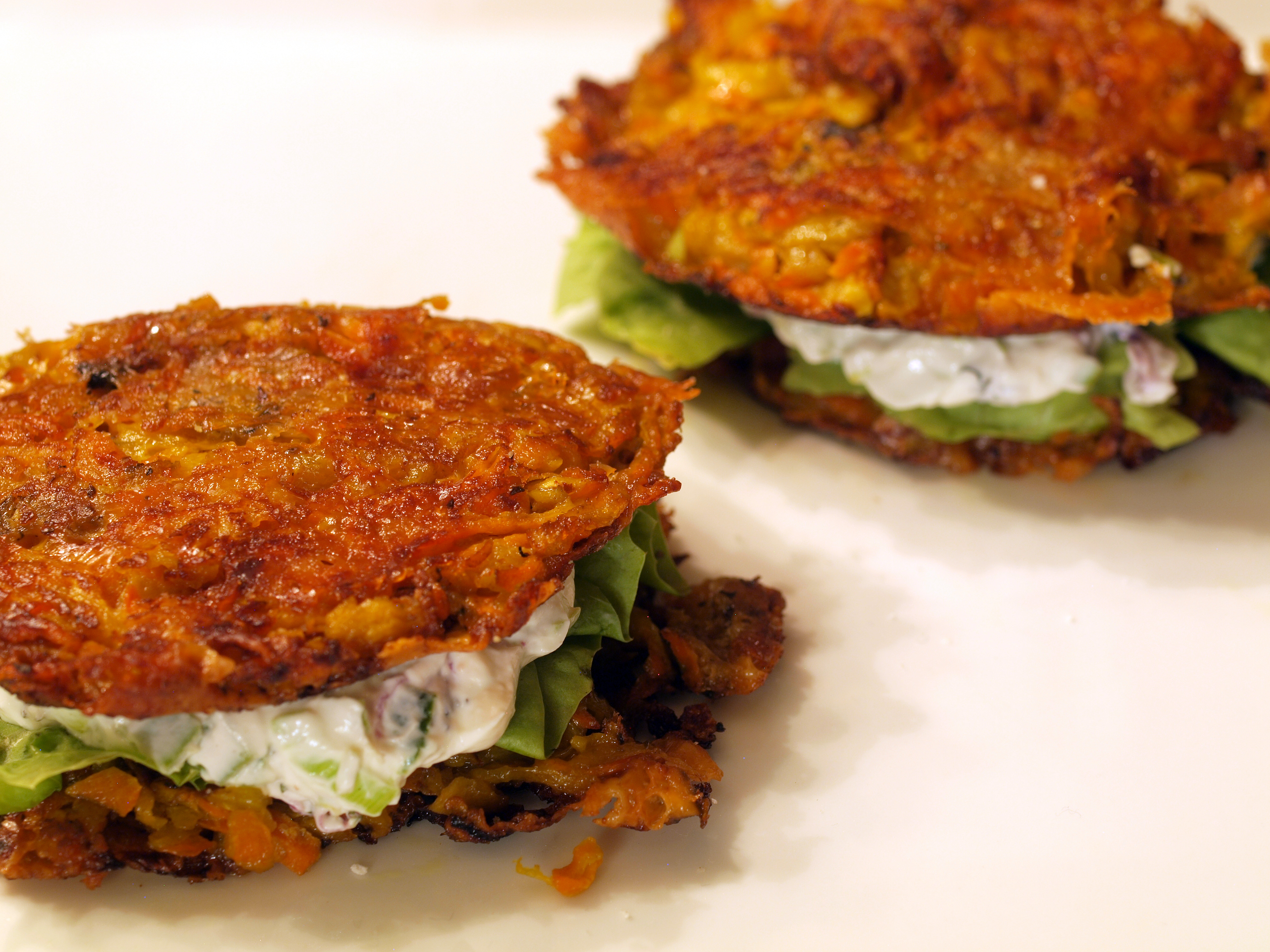 I first must apologize to Yellow House Cheese as I purchased this cheese in late October at a local farmer’s market and then, I lost track of time. Seriously, I have no idea where it went, before I could blink, it was January and I had yet to eat this amazing sheep’s milk blue cheese. Thankfully, the sous chef had frozen the cheese, as we were told we could do. Once it was unfrozen, it was still as delicious and unique as I remember from October.

In the package of goodies from the local market, were three root vegetables: carrots (left, in picture below), a turnip (center) and a yellow/golden beet (right). I always thought beets were red until I stumbled on this beet and noticed it was in fact yellow and not red. Once I had my root vegetable stash, it was time to move on to the main piece: fritters.

I am not sure how the idea of a fritter (or latke) popped into my head but once it was in there, it wouldn’t leave. I googled root vegetable fritters and found a great recipe to use for the basis of my particular fritters. The recipe was simply a guide as some of the root vegetables I had were not in this recipe and I used blue cheese instead of fontina. However, for the more basic ingredients (egg, flour, etc), I still included them but not in the same quantity. I learned how to cook from the sous chef and she never measured anything herself so I do not as well. That didn’t change with these fritters. I shredded the root vegetables until I believed I had enough to make four regular sized fritters (two sandwiches) and went from there. That was the case with the other ingredients as well. I did not measure anything.

When you have your main ingredients as the bread, filling the inside of the grilled cheese becomes rather difficult. You don’t want to choose an ingredient or ingredients that will overpower the bread. Thankfully, inspiration was in the original package of goodies from the market and the fritter recipe I found online: leeks, escarole and sour cream. (I have to give credit where credit is due, the inspiration led the sous chef to think of the sour cream idea.) The leeks and escarole both came in the package with the root vegetables so I lightly sautéed them with some butter. I added the mixture into some plain sour cream and you have your inside. To make sure there was some crunch as well, I added some lettuce, that was also in the package, to the inside of the sandwich. It was a nice addition although not 100% necessary.

Making this grilled cheese was an adventure and even if I always knew what I was doing, I had no idea how the sandwich would turn out. Thankfully, the fritters fried up perfectly and the sour cream was delicious. With those two ingredients, and the awesome blue cheese mixed in, this sandwich turned out to be a delicious and unique grilled cheese. The fritters were not too strong and the sour cream added a great contrast. When creating this grilled cheese simply to eat, not to blog about, it really shouldn’t take that long to cook and you will have a delicious main course.