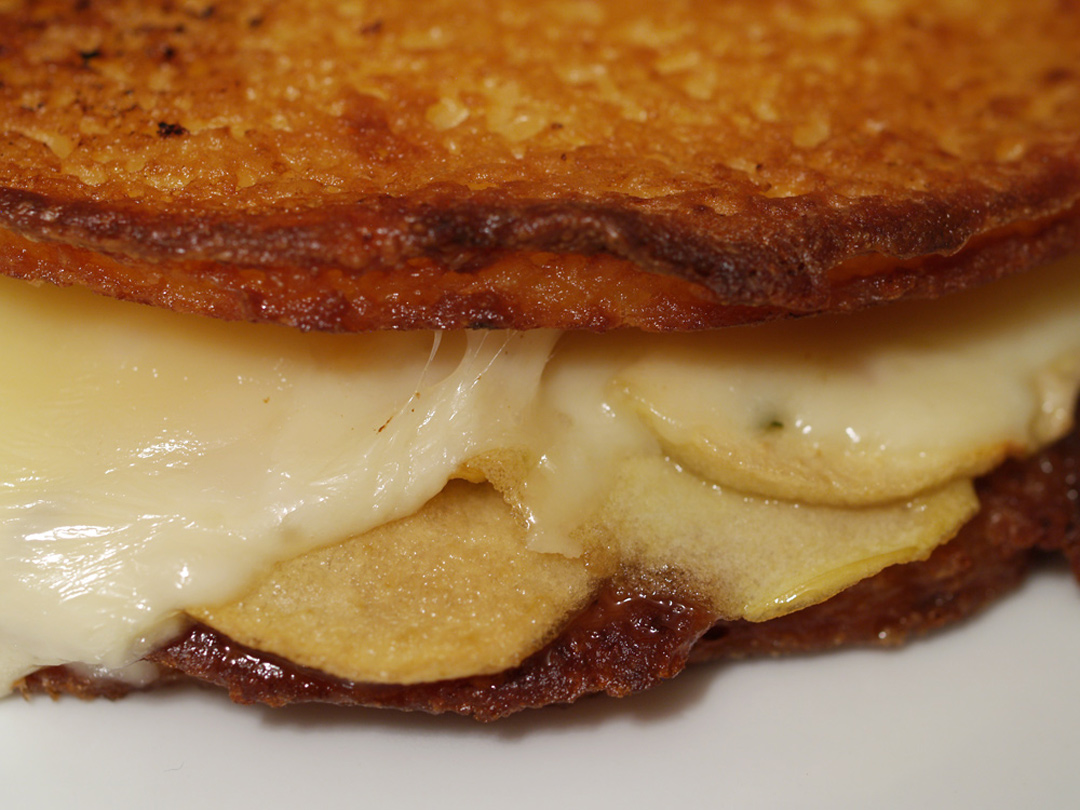 Tonight, I cheated on the local market where we normally buy ingredients from, with Whole Foods. The restaurant where we purchased the potato pancakes is in the same strip mall as Whole Foods so it only made sense.  I was searching through Whole Foods cheese department, as I haven’t done it recently, and stumbled upon Fontal cheese because of its sign:

I thought to myself, “Pefect!” I had already planned on using blue cheese as well, so I did not want anything over the top and definitely needed something that melts. The Fontal fit both criteria perfectly and worked awesomely, in my opinion.

Fontal is a semi-firm cheese made commercially in factories from pasteurized cow’s milk.

It is made in flat cylinders, with concave sides, and a thin rind that may be covered with brownish-red wax, or plastic.

Inside the Fontal Cheese is a pale straw colour, and supple but dense, with some small holes. It has a mild, nutty flavour, that is almost sweet with a touch of tartness.

The flavour varies depending on where the Fontal Cheese is made. Some versions are tangier than others. The tang in the taste comes out particularly when the cheese is melted. (Learn More.)

I am not sure that this is actually the case, but I tasted some sort of Swiss in the small pieces I tasted prior to cooking the grilled cheese. It was very delicious and I agree 100% with the description above.

Previously, I had blue cheese potato pancakes so I had hoped to incorporate blue cheese in with this grilled cheese as well. Luckily, I was able to. Since most of us are aware of blue cheese, regardless of whether you like it or not, I thought I would bestow upon you some blue cheese history courtesy the Internets. (This particular Amish Blue Cheese contains the following on the box: Produced with sustainable agricultural practices.)

Most of these cheeses were originally produced in caves in their respective areas, where the mold was naturally present. This combined with the unique nutrients that the mold grew on in the caves affected the flavor, texture and blue-green color of the mold in each of these cheeses.  In the beginning, this was most likely discovered by accident when cheeses were stored in the caves, and they developed mold.  Then someone decided to taste the cheese that others might have thought to be ruined, and realized how exquisite the taste had become.

Some blue cheeses, such as Danablue, were developed later as less expensive alternatives to the higher priced Roquefort cheese from France.

The process for making America’s ‘Maytag Blue Cheese’ was developed by the Iowa State U. in 1941 (it is a process for making blue cheese with pasteurized milk.) Production was begun by Fred Maytag II (of dishwasher fame) when he heard about the new process. Maytag blue is also aged in specially designed caves. (FoodReference.com)

I should mention that the Jewish delicacy that was turned on its head in this grilled cheese, was in fact the potato pancakes or latkas. Normally eaten during the Jewish holiday of Hanukkah, “The oil for cooking the latkes is reminiscent of the oil from the Hanukkah story that kept the Second Temple of ancient Israel lit with a long-lasting flame that is celebrated as a miracle.” I can remember way back making these delicious potato delights with my mom just in time for Hanukkah. It is a tradition that I have loved and one I hope to pass on to my own children.

Potato pancakes are normally served with either sour cream or applesauce of which I prefer sour cream. However, I was not sure that sour cream would truly work on a grilled cheese so I turned to applesauce. The possibility of using canned applesauce was there, but who really wants to used canned anything, right? Therefore, I bought 2 apples, of which I used one, and created something between plain apples and applesauce.

Thanks to the suggestion(s) of the sous chef, we baked sliced apples in the oven and topped them lightly with white sugar and a tad more heavily with brown sugar. They were cooked until soft and tasty. A small amount of water was added to assist in the softening process.

Once we had the apples made, we were ready to create tonight’s Jew Blue Grilled Cheese. Since I wanted the blue cheese to somewhat melt into the potato pancakes, it was the first ingredient to be layered. From there, I added the apple creation and then the Fontal cheese. Finally, the other potato pancake went on top and we baked. That is all.

In my opinion, this was an awesome grilled cheese that took a traditional meal of potato pancakes and apple sauce and slightly turned it on its head. Although somewhat greasy, the potato pancakes, since they were thick, held up well as the bread allowing me to devour the sandwich with only minor issues. The apples, both soft and sweet, played nicely with the somewhat sour taste of the blue cheese that was sprinkled throughout. The first half had more blue cheese, which I liked, while the second half was lacking. If I could do it again, I would make sure that the blue cheese was evenly spread throughout the whole grilled cheese, allowing me to taste both the sweet and sour taste in each bite. Finally, the Fontal cheese was a perfect compliment to the blue cheese and apples. It worked great and really did not overshadow the other ingredients.