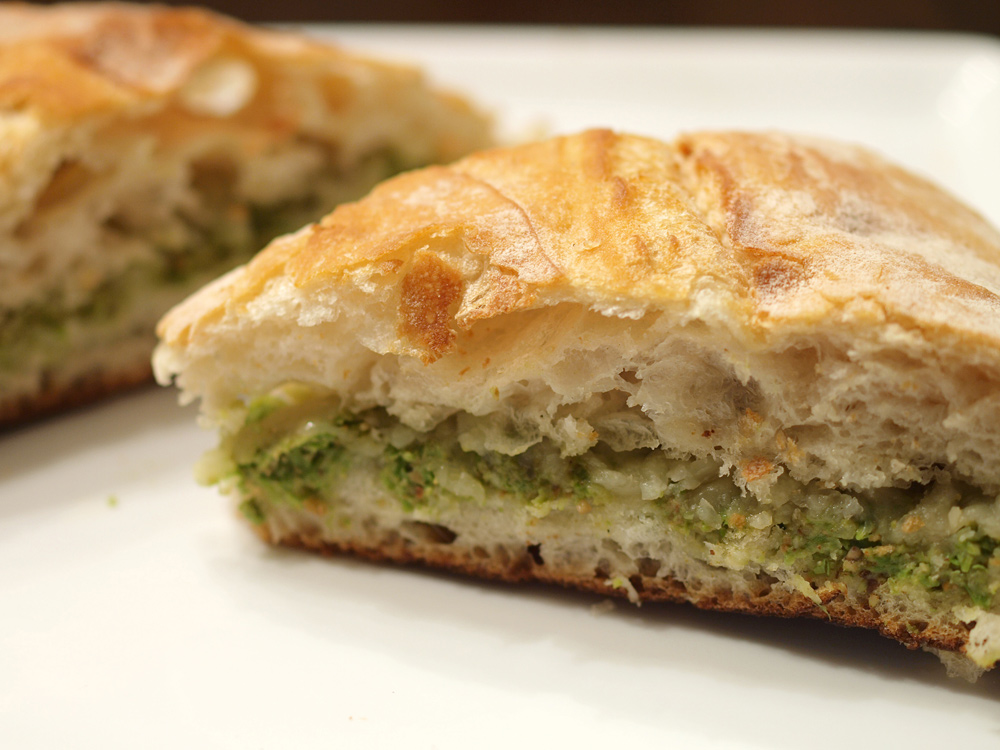 As you may already know, I receive Google alerts for any mention of the grilled cheese. Sometimes those alerts produce a great article, such as The Atlantic’s The Princess and the Pea, that includes an intriguing recipe like Pea Pesto & Manchego Grilled Cheese. I was honestly surprised to find a grilled cheese recipe in the middle of an article about peas, but I was definitely not disappointed. I am always interested in trying new ingredients, such as pea pesto, as sometimes I feel like I am getting stale with my own thoughts.

I had previously tried a variety of raw milk manchego in one of my cheese tasting entries and was surprisingly not a fan. I was unsure if it was because I chose the raw milk version or if I simply did not like Manchego in general. However, this recipe called specifically for Manchego so I decided to give it a second chance.

Manchego is an aged cheese, from semi-cured to cured, made only with milk from manchega sheep breed, unpasteurized or pasteurized. It is produced through an enzimatic coagulation. The paste is pressed and uncooked. (CheeseFromSpain.com)

This time, however, I did like the Manchego. Maybe my tastes have matured, maybe the pasteurized version does taste different or maybe the melting process helps the taste (in my opinion). I have even continued to use the leftover Manchego in other random places (like scrambled eggs).

I have never really made anything but traditional pesto so I was excited to try a pea pesto.

When I have made a pesto, they have been haphazard with little additional ingredients. However, with this pea pesto, I wanted to make sure I made it correctly with all of the ingredients, including pine nuts. To my surprise, pine nuts are rather pricey but I went ahead and included them.

I had to google how to specifically toast pine nuts and might have cooked them just a bit too long but at no point do I believe that affected the taste of the grilled cheese.

Take a dry non-stick pan. Put the pine nuts in it (use no oil) and turn the heat to medium. Shake the pan every 30 seconds and toss the pine nuts. When they are lightly browned, turn the heat off and remove the pinenuts to a plate and leave them to cool. If you leave them in the hot pan they will keep on cooking. (GreatFood.ie)

In the pea pesto are of course peas, pine nuts and your choice of Parmesan cheese. I had some leftover Parmesan from a pasta dinner, but you could of course use some Parmigiano-Reggiano, as the recipe calls for.

The recipe called for this pesto to be placed inside a grilled cheese sandwich, but I wonder how it would taste as a dip with crackers/tortillas. I can’t see why it wouldn’t be good. If I had some leftover I would have definitely tried it but alas, all the pea pesto is gone.

Ciabatta is ciabatta. Yummy ciabatta is even better.

I am really glad that I made this grilled cheese as it is very unique. The Manchego cheese, which the non-melted version I had previously disliked, was great. The pea pesto had a very distinct taste (so distinct I can’t describe it) that I think everyone should try at least once. At this stage, this was not a grilled cheese I would think of personally, so I am very glad I stumbled on The Atlantic‘s article on peas.