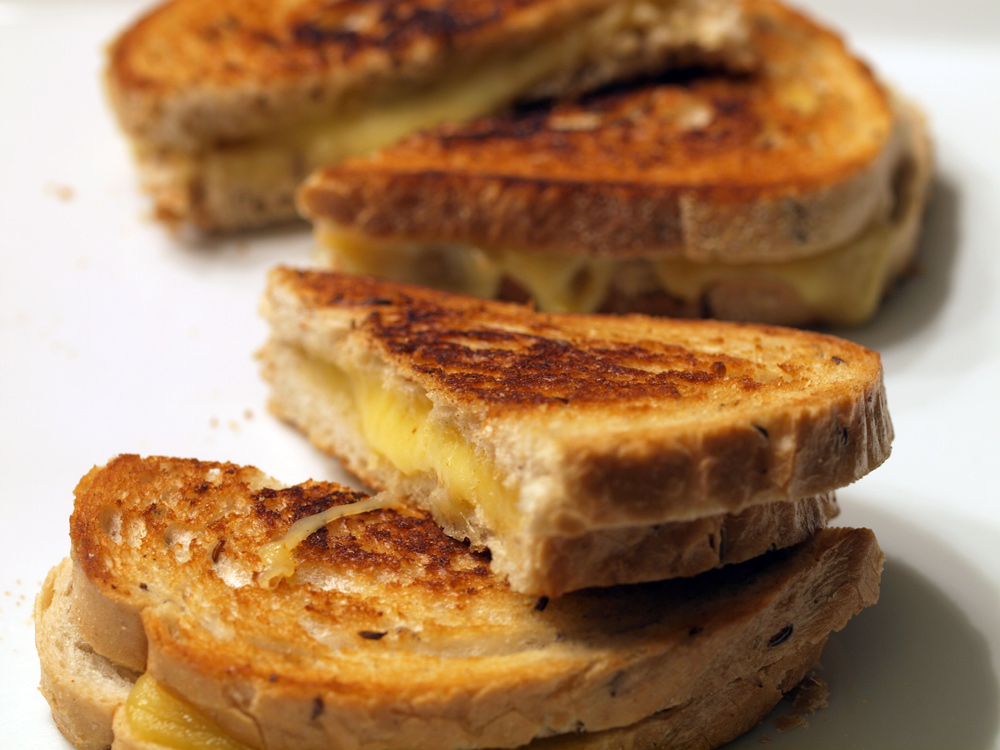 With it being my day off (last Thursday), I decided that I would once again head to Whole Foods’ remnant cheese section and see what bargains I could find. I had just finished writing my previous entry, so I was excited to try some more cheese. By creating these quick sandwiches and focusing on the cheese instead of the whole grilled cheese sandwich, I am able to try cheeses that I may have never even given a second glance. Don’t get me wrong, I still plan on returning to the whole grilled cheese sandwich creations, but for now, I enjoy trying new and unusual cheeses.

As everyone should already know, I love smoked cheeses. Therefore, once I saw a Maple Leaf Apple Smoked Gouda remnant, I knew I had to have it. I had to try it. In my opinion, when it comes to cheese, it is either smoked or not.

In this case though, I didn’t think this cheese had enough smoked flavor. When I tasted it prior to being in the sandwich, it was good. When I tasted it in the grilled cheese, the smoked flavor was too mild for my tastes. I don’t think the issue was the rye bread or the fact that I didn’t use enough, I just didn’t taste enough of the smokiness that I have come to love. If you stumble upon this particular cheese, I would still recommend you try it. It may not live up to the hype of smoked cheese though.

Morbier AOC is made following strict standards, as denoted by the denomination “AOC” in its name. All AOC cheeses are controlled during the production to make sure that buyers get an authentic and delicious product. Originally Morbier was made using the leftover evening milk (protected by a layer of ash overnight) and the fresh morning milk of the day. Today the milk is from the same milking, but the border of ash in the middle of the cheese remains as tradition. The cheese itself is firm and elastic, but creamy on the palate with a mild tangy finish. It’s a very popular cheese for the cheese board. It has a thin, moist rind that might sometimes develop some mold. This is normal, but if you don’t like it, simply wash it off with salt water. Bring to room temperature before serving. Pair with Chardonnay or Pinot Noir. (Gourmet FoodWorld)

When stumbling on this Morbier AOC, I saw the ash and was intrigued. I have never had a cheese with ash in it and I have had very few cheeses with raw milk so I thought why not try some Morbier AOC, a cheese with two unique qualities? I was a little hesitant but I went for it.

When I tasted the Morbier by itself, I could barely finish the one slice. It was very strong and had a pungent flavor. I didn’t know if I should even try it in a grilled cheese sandwich, but this is what I bought the cheese for, so I continued on. I soldiered on. Once melted in a grilled cheese, I still wasn’t sure. The first bite contained the original pungent flavor that turned me off. Yes, the grilled cheese contained very strong flavors, but it also contained some more minor flavors that were really good. Thankfully, at times, the strong flavor of the rye balanced the strong flavor of the cheese.

Each bite was different, some good, some not so good. As I was beginning to finish the grilled cheese, I realized I was much more intrigued by the Morbier than the Smoked Gouda. Its a very intense cheese that could truly turn off some people after one bite, but hopefully they don’t give up. Hopefully they give it a second chance. It is worth it.