Hopefully you enjoyed the Series, Free Lunch, in which I highlighted cheeses I received from both Kerrygold (Blarney Castle & Dubliner) and Cabot (Chipotle & Private Stock Cheddar). I thoroughly enjoyed researching the various cheeses and of course tasting them. Each cheese had its own unique flavor and texture creating a final product that was absolutely delicious and very unique.

Once I had the Free Lunch series created, I knew I next wanted to highlight some of the great Ohio cheeses that are being produced. That is where Local Lunch comes in. Over the past few weeks and months, I have really become interested in Ohio cheeses, so much that I have officially joined the newly formed Ohio Cheese Guild. There are some amazing local cheeses being created and the country needs to realize that. Local Lunch will be a 3-part series highlighting cheeses from Mackenzie Creamery, Mayfield Road Creamery, and Lake Erie Creamery. Unfortunately, it was a lot harder to find local cheese than expected, but I did find some and you will learn about a very small sampling over the next few days. I hope you enjoy.

When I visited the local grocery store to purchase some Mackenzie Creamery Chèvre, I was hoping to purchase their Apricot Ginger variety. Since the grocery was out of it at the time, I decided to purchase Sweet Fire Chèvre.

“Chèvre” may seem like an intimidating word or type of cheese but it shouldn’t be. Chèvre simply means goat, from which the milk comes to create Chèvre cheese. France is the typical country of origin for Chèvre cheese. However, as Mackenzie Creamery demonstrates, this variety of cheese can originate from just about anywhere and still be award, winningly delicious.

Goat cheeses have a unique, tart, earthy flavor that sets them apart from cow cheeses. This distinctive tang and aroma grows robust and bold as it ages. Milk production of goats, unlike of cow’s, is seasonal from mid-March through October. [1]

The flavor and aroma of goat cheese relies upon its moisture, density, aging and flavoring. It can feature a soft, semisoft, firm, or hard texture that indicates its moisture content. [1]

Chèvre cheese can be shaped into mall rounds, log shapes, or large rounds and paired with herbs or covered in black pepper. [2]

There is so much good to say about Mackenzie Creamery that I am not even sure where to begin. Way back in 2009, when this blog was in its infancy, and wasn’t even called GrilledShane, Mrs. Jean Mackenzie was kind enough to welcome me into her house/farm. It was Sunday, so they weren’t actually making cheese, but I was still able to tour the farm and get a feel for the business. I was impressed then and still am impressed. Mackenzie Creamery has grown so much since that day back in October, 2009, winning ACS awards and becoming a brand name in Ohio and around the country.

Instead of reinventing the wheel, here is a section of my original post telling the story how Mackenzie Creamery began and my experience:

I am still in contact with Jean Mackenzie and she has been great in advising me in future career possibilities. I can’t wait to see what her and Mackenzie Creamery does next.

Sweet Fire Chèvre is not a Mackenzie Creamery goat cheese that I planned on featuring but it most definitely intrigued me. The ingredients of this particular goat cheese are unique. Not only does it contain black raspberries, it also includes habañeros, creating that “sweet fire” in its name. Now I do not know if there is a special way to eat this cheese or not, but since there is the black raspberry/habañero “sauce/syrup” packed throughout the Chèvre, I would recommend making sure that you taste a little bit of all the ingredients when trying. While sampling and making the grilled cheese, I didn’t mix the cheese completely, you could, but I wanted to  make sure all the flavors were present.

When sampling Sweet Fire Chèvre, you quickly realize the flavors come in stages. Upon first tasting the Chèvre, you taste the sweetness of the black raspberries and enjoy that for a second. Then, the small bite of habañero kicks in, providing just enough jolt to contrast the sweetness you originally experienced.

If you are looking for a cheese that has a huge kick and is overpowering, you better look elsewhere. However, if you are looking for a gourmet Chèvre that has nuance of flavor and is delicious, Mackenzie Creamery Sweet Fire Chèvre is definitely for you. Some goat cheeses have more of a crumbly texture due to the inclusion of more moisture. Mackenzie Creamery’s Chèvre contains less moisture and therefore is more packed and dense, something I prefer. In my opinion, I see the “less moisture” Chèvre as more gourmet than their more moist counterparts as it provides a smoother, richer experience and overall better flavor.

When I create grilled cheese sandwiches with soft cheeses, such a Chèvre, I always worry that the cheese isn’t going to melt and/or I have to use every last bit just to make sure to cover the entire piece of bread. Neither one of those concerns actually turned into reality with this particular grilled cheese. As you can see in the large photo below, I used about half of the Chèvre for one small-to-medium sized grilled cheese, creating a delicious treat.

With a soft cheese and crunchy Italian bread, the texture contrasts perfectly. The Sweet Fire Chèvre provided a great, sweet flavor and creamy texture in between two pieces of freshly toasted bread. The kick that I tasted when I sampled the cheese by itself was still present in the sandwich, just not as strong. If you are looking for a cheese that provides great flavor and texture along with a small bite, this if the perfect Chèvre for your grilled cheese. 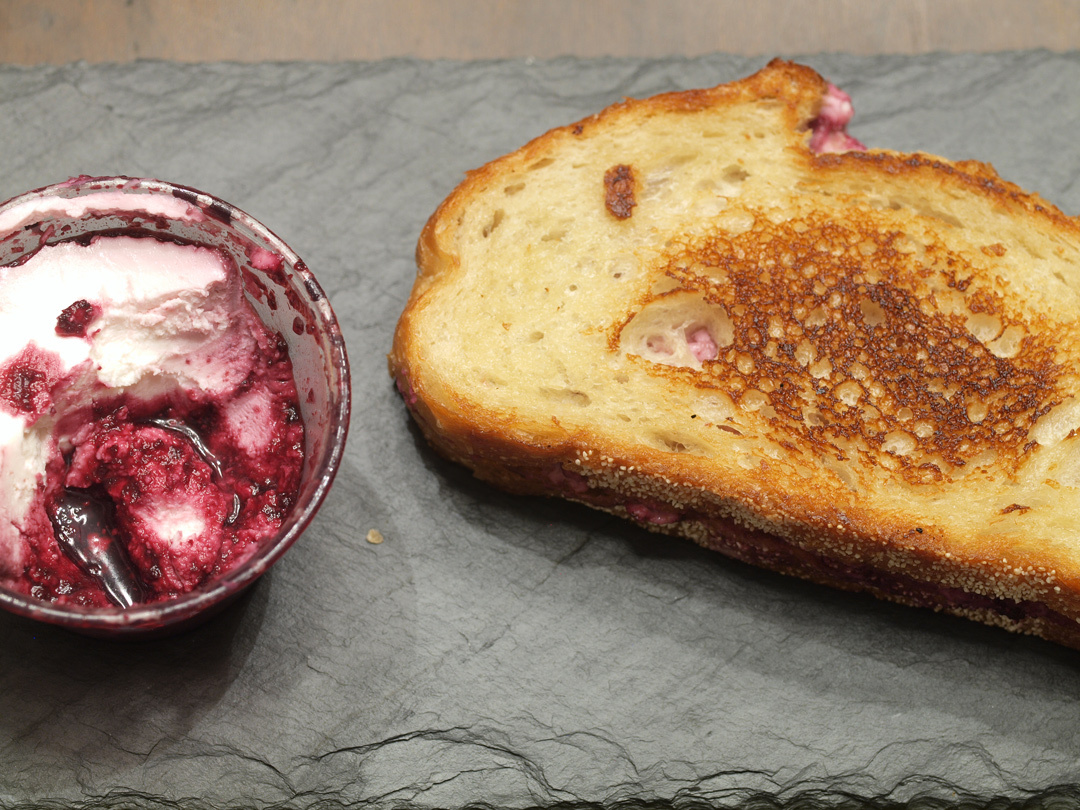