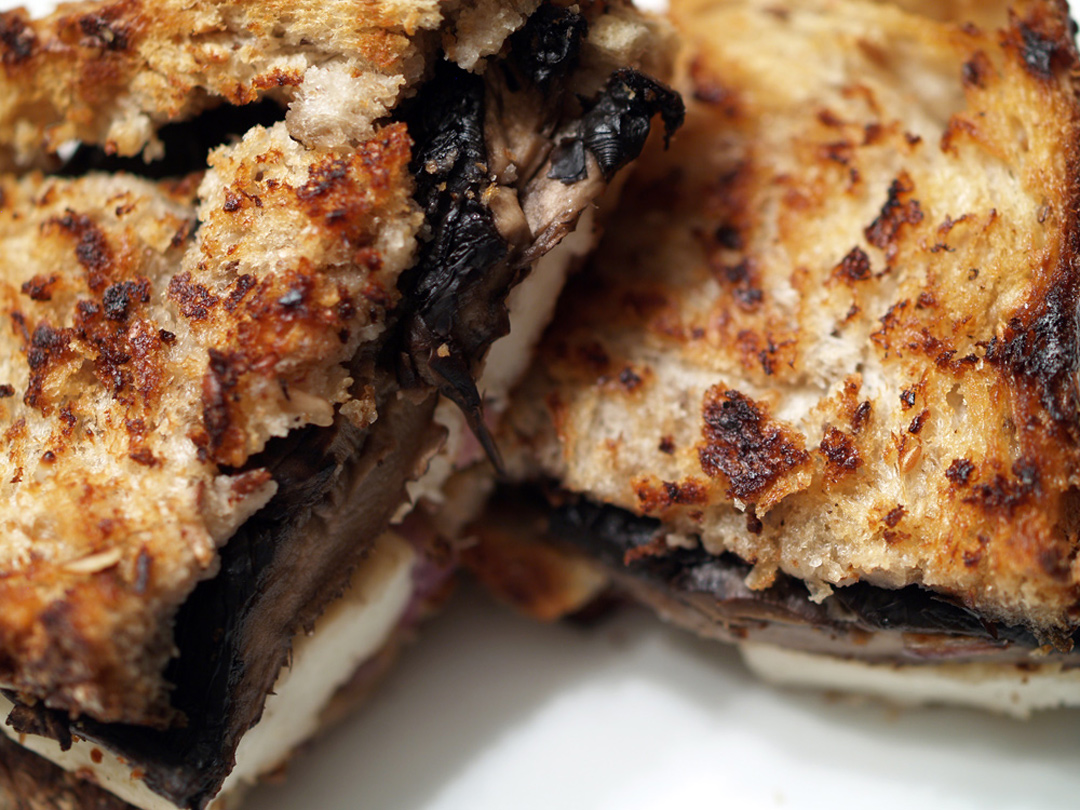 Normally, this is where I talk about this grilled cheeses cheese (Halloumi) but this week is special and I must first give an update on my life. I don’t write too much about my personal life and instead focus only on my grilled cheese sandwiches. I would like to change that with tonight’s update. Not only do I want you to know about my sandwiches, I also want you to know about me and my personal life. Sure, I have an About page, but that is pretty general. Now it is time to learn about the real GrilledShane.

Way back when I turned 16, I went out and got a job at a local chocolate shop, where I was a soda jerk. (Awesome job.) After the parlor part of the shop closed, I needed to find a new job. I ended up at the local Cafe Nordstrom. My sous chef found both of these jobs. Smart woman she is.

I worked at the Cafe until 2002 when I started interning for college. I did not return until 2006, post-graduation, when I needed a temporary position while I searched for a full-time employment in the design field. I found a webmaster position at a small publishing company but still remained at the cafe on Saturdays. The webmaster job treated me well for three years as I learned a lot, grew as a person and was able to travel to NYC twice.

Monday, at 9ish am, I told my boss that I would be leaving my first job out of college. Where would I be headed, you ask? Back to my home at Cafe Nordstrom, hopefully to begin my true career in the food industry. I don’t know how long I will last at the Cafe, but it will give me the beginning skills to investigate similar opportunities within the industry. Who knows if I want to be in the front of the house or back of the house, waitering or cooking. I don’t, but I am excited to find out. Please, follow me on this journey…

Recently, after scouring the internet for other grilled cheese recipes, I stumbled upon BlueJeanGourmet.com and their recipe for Grilled Halloumi. I have never even heard of Halloumi cheese, yet alone tasted it, so when I was at the grocery store this past weekend I was intrigued enough to buy a package for that night’s Sunday Dinner. Little did I know that mint of all ingredients is actually a staple in Halloumi cheese.

The cheese is white, with a distinctive layered texture, similar to mozzarella, and has a salty flavour. It is stored in its natural juices with salt-water, and can keep for up to a year if frozen below ?18 °C (0 °F) and defrosted to +4 °C (39 °F) for sale at supermarkets. It is often garnished with mint to add to the taste. Traditionally, the mint leaves were used as a preservative, the use serendipitously discovered when the fresh Halloumi was kept wrapped for freshness and flavour from the mint leaves. Hence, if you look closely, many packaged Halloumi will have bits of mint leaf on the surface of the cheese. (Wikipedia)

Halloumi cheese has a high melting point so when it is grilled, it does not melt everywhere like most other cheeses. This is the reason I thought it would be good to try for a grilled cheese sandwich. The salty taste described above was evident in the tasting and in the sandwich. The Halloumi was very interesting and one that I would like to try again.

While at the grocery store I concocted the recipe for tonight’s sandwich: Halloumi cheese, eight grain bread and portobello mushrooms. The sous chef decided to add red onion. I only had little knowledge of Halloumi to go on, so I basically winged it.

The other star for this grilled cheese, minus the bread of course, were the portobello mushrooms. I had originally thought about doing a portobello sandwich instead of the crusted sourdough grilled cheese but passed because the grocery store I was at had a poor selection of bulk portobellos. Since this past Sunday I was at a different grocery store with a better bulk supply, I thought I would revisit these particular mushrooms.

The only thing I did to prepare these lovely portobello mushrooms was to grill them in a pan with a bit of olive oil and salt. That is really it. Just to make sure to flip them every couple minutes so that they do not burn. This would even be a good way to eat the mushrooms by themselves, if you are a mushroom person of course.

Now onto the cheese. I am still fascinated that one is able to take a cheese, grill it and not end up with a complete mess. Awesome to say the least. Anyway, since I seem to be a big fan of olive oil, I brushed some all over the cheese and then placed the Halloumi on the hot grill pan. I cooked it for two minutes per side until it was a nice brown color (see above). You can start to see it bubble around the edges, which, I assume, is a good thing. As with the mushrooms after they were grilled, the Halloumi cheese can be eaten right off the grill without any other ingredients or fuss. I may have actually preferred it this way.

My father, the taste tester, never really gets to choose any of the ingredients for the Sunday Dinners, so this week, we asked for his opinion. He was with the sous chef and I at the grocery store where he was able to see the various choices for bread. He decided on eight grain, which turned out to be a great choice. The bread, by itself, was delicious and the crust was awesomely crunchy. I am just not sure if it was crunchy enough on the inside to hold all of the heavy ingredients (cheese & mushrooms) within the grilled cheese.

This week, the pieces were perfect, the cheese was salty but good, the portobello mushrooms were a little wet but very flavorful and even the bread was crunchy on the outside but soft on the inside. However, when placed together in one grilled cheese, that is when everything fell apart, literally and figuratively. Unfortunately, the portobello mushrooms overpowered the taste of the Halloumi and the red onions were simply non-existent. The bread was crunchy on the outside but the interior did not crunch up so it was a little mushy due to the watery nature of the mushrooms.