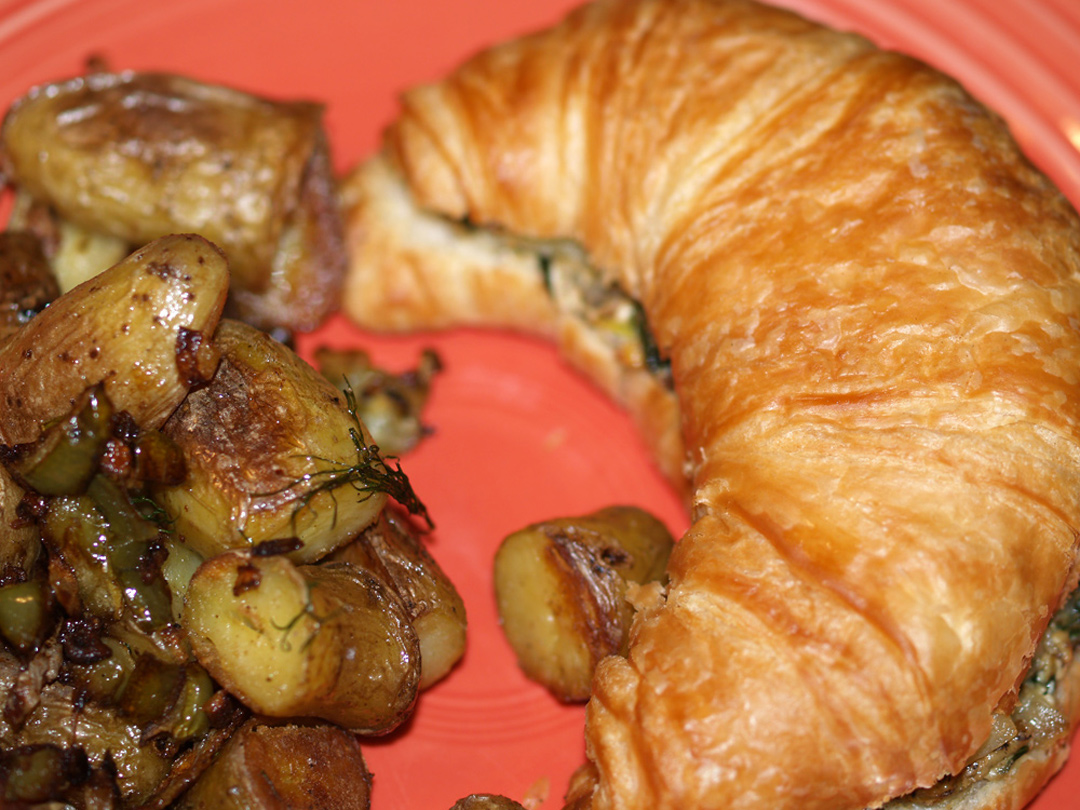 This week, I decided that I was going to call AOL’s bluff and see if they really knew grilled cheese sandwiches. I was about to put them to the test. I decided that I was going to follow one of AOL’s recipes. Ever since I started this project, I have been using some sort of traditional bread, bread that comes in loaf form. This week I decided it was time to think outside the box a bit more and use a croissant for the basis of my grilled cheese sandwich. Again, I must say thank you AOL, the croissant was delicious. I had been hesitant to use non-original recipes, but after eating tonight’s grilled cheese I won’t be.

I was instructed to finely chop up the onions, put them in a pan with butter and brown them. Simple enough. Next I added in the mostly dry spinach, cover and cook until it was becoming wilted. Finally, I added in the goat cheese, stirring everything together. That became the basis of my grilled cheese and let me tell you, it was delicious. I did add some salt to the mixture, prior to putting it on the croissant and I may have actually added too much. That is something I will need to keep in mind in the future, even if I am a fan of salt.

Adding cheese into the ingredients, instead of on top of them, is definitely something I should try again. The goat cheese was a perfect cheese for this type of mixture and grilled cheese. If you out there in Internet land have any suggestions for other cheeses that would work in a similar situation, please leave your thoughts in the comments below.

The gruyere on top, which could have also been goat cheese, did not melt as much as I would have liked. That may have been partially because of problems with our oven, but I also wonder if gruyere has a higher melting temperature. It did brown, but unfortunately, did not completely melt . It didn’t affect the taste, but it did affect the look which in cooking is a big deal. I will have to play with that in the future.

I must admit, I was hesitant to use someone another recipe. I believed that all of my Sunday Dinners needed to be 100% original. Now that I have tried this recipe, I will become more open to the idea of using outside recipes for inspiration. Overall, this was a great grilled cheese and definitely one that I would try again. The spinach/cheese mixture on the croissant was delish. I just need to watch my salting and try and melt the gruyere a little more.