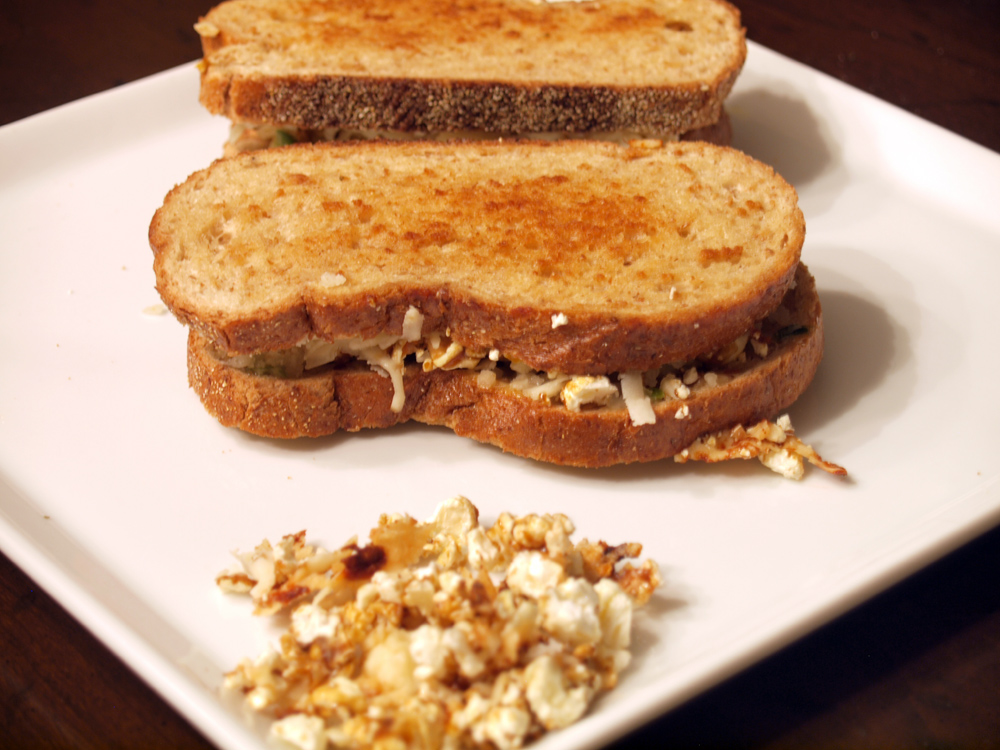 Only once previously have I attempted a Fourth of July grilled cheese themed sandwich and it was a Red, White & Blue success. It was creative and unique and I hoped to recreate that success with a new and intriguing grilled cheese this year. I was thinking of going the red, white and blue color route again but I had already done it. Then, I began thinking about traditionally American foods, such as apple pie and American events, such as baseball. Eventually, that lead me to my main ingredient for this Fourth of July grilled cheese sandwich: Cracker Jack.

Although Pecorino Romano originated in the countryside outside of Rome, all are made in Sardinia today, except one: Fulvi. This is why it is referred to as “genuine” Pecorino Romano. Sheep milk from the Lazio region goes to dairies in the village of Nepi, where, according to ancient recipe, it is handmade into giant, 65-pound wheels. Pungent and pleasantly briny, it seems to melt on the tongue. Since it is far less hard and dry than Sardinian Pecorinos, when it is grated onto hot food, the slivers blend, but do not disappear. (Zabars.com)

After checking out the entire cheese department at my local Whole Foods, I ended up with Pecorino Romano cheese. A lot of the cheeses I liked seemed to be too strong and overwhelming while this seemed to have the perfect amount of creaminess and bite. The plan was to make sure the grilled cheese had a kick/some heat and this cheese definitely complimented the overall flavor. It was a great choice.

Once I decided that I didn’t want to simply go the red, white and blue route, I (and the sous chef) started thinking about American things, such as baseball. And then, of course, we started singing Take Me Out to the Ball Game (original lyrics – must listen).

I simply blended a handful or two of Cracker Jacks, depending on how many grilled cheeses you are making, until there were all sizes of pieces. Set those aside.

Firecrackers are a big part of the Fourth of July so why not make a firecracker mayonnaise made with freshly planted/harvested cayenne peppers (from my own garden)? At first, I only used one pepper but the heat just wasn’t there so I added another . The heat may have been limited from the cayenne peppers as I might have picked them prematurely. Please keep that in mind when making your own firecracker mayo.

And then I added crushed red pepper. And more crushed red pepper. I was calling this firecracker mayo so I wanted to make sure the heat/kick was evident. Add as much (or little) of peppers depending on how much heat you enjoy. In addition to the multiple peppers, I added a squirt of fresh lemon juice and some chopped green onions. This mayonnaise was delicious in the grilled cheese as well as a dip with potato chips.

Obviously, I like bread. I do not discriminate in the least. With the honey whole wheat, we just happened to have it at home so I went with it and it turned out to be a great choice.

This grilled cheese is built on The Original Cracker Jack. On the surface, that just sounds absurd and possibly even a little gross. However, once you dig down and actually give this grilled cheese a chance, you will quickly realize how amazing the flavor and texture is. The heat brought by the firecracker mayo contrasts greatly with the sweet flavor and crunch of the cracker jacks. Add a cheese with a little of bite, Genuine Pecorino Romano Fulvi, and you have yourself one amazing grilled cheese sandwich. I was thoroughly surprised by how good this grilled cheese was and I suggest you try it yourself to see how awesome it is.

Oh and Happy 4th of July to all. Be safe and have fun!