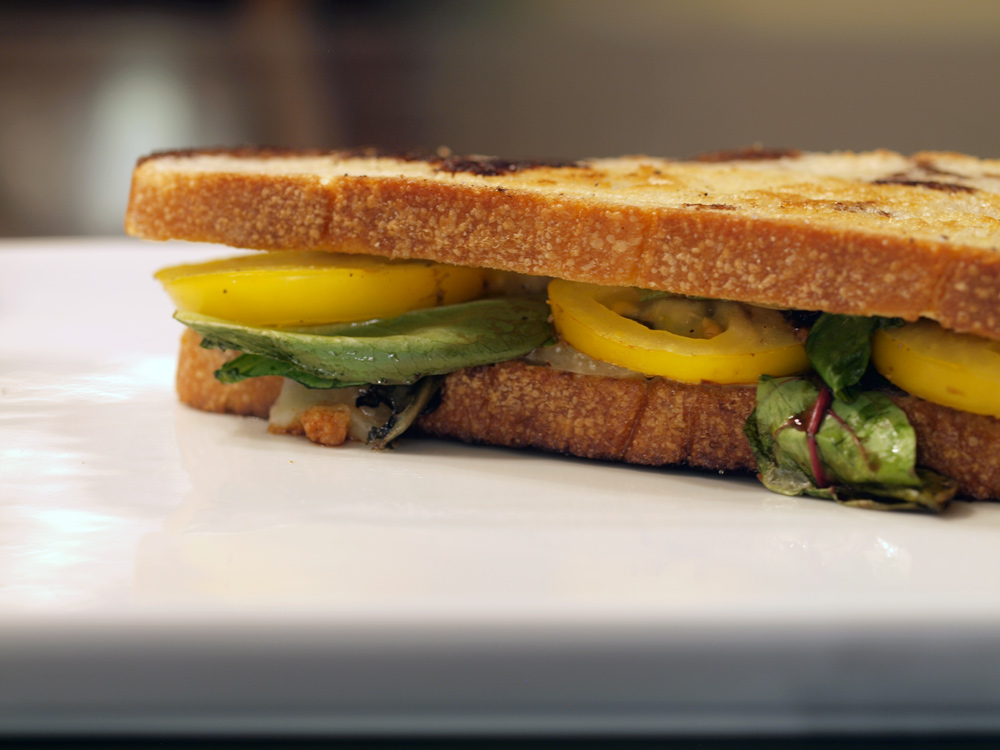 Finally, I have returned with a new grilledshane original creation. Sure, I flirted with a sandwich that highlighted an awesome local cheese, but it has been forever since I actually created a new grilledshane original. It was time. It was definitely time. I haven’t truly made a new grilled cheese since I made ~95 in a few weeks for my upcoming book, Melt: 100 Amazing Adventures in Grilled Cheese, which you may have heard about once or twice. I hope to create grilled cheeses on a regular basis again, as long as my creativity hasn’t been depleted. If you, the Internet, have any great vegetarian grilled cheese creations to suggest, please, leave them in the comments below.

Now onto this week’s grilled cheese…

As I usually do, I walk through Whole Foods to find inspiration, to find a special cheese. This time, I found a Spanish cheese on sale that contained cow’s, goat’s and sheep’s milk. I am normally prefer cow cheeses, but I thought why not try a mix of milks? Jason, the awesome cheesemonger at Whole Foods, said it was a great cheese so how could I not buy it? Spoiler: Campo de Montalban did not disappoint.

Campo de Montalban is a Spanish cheese made from a mixture of cow’s, sheep’s and goat’s milk. This cheese is made in the region of la Manga and looks very similar to Manchego in texture and appearance, both have light to dark, waxy herringbone rinds and light butter colored interiors. In fact Campo de Montalban was considered a Manchego until 1985. (GourmetFood.com) At that time, the Spanish government changed the laws governing cheese and decreed that certain cheeses from the La Mancha region could only be called Manchego if made from sheep milk. (Marcel The Cheesemonger)

Campo de Montalban does differ in flavor from the Manchego. This gourmet cheese is aged for 3 months and the flavor is really rich, representing the flavor of all three milks. (GourmetFood.com) This cheese looks like Manchego as the molds used for pressing the curd have the same basket weave pattern as Manchego. The rind has an olive green hue whereas Manchego is brown. The texture of the paste is slightly dry with the individual curds still visible like Manchego; but the taste is quite different. (Marcel The Cheesemonger)

Who knew there was so much information about Campo de Montalban on the Internet? I surely did not.

I know you are saying, “Tomatoes on a grilled cheese, real creative Shane!” However, these are not just regular, ol’ boring tomatoes. These are Ohio grown roma tomatoes.

Both the Ohio State University Extension and Mother Earth News recommends ‘Roma’ for Ohio. ‘Roma’ tomatoes are used popularly in Italian dishes and have a meaty, dense flesh with a low moisture content. The tomatoes are not round or circular but egg or pear shaped and contain very few seeds. The color of the tomatoes is deep red, reddish-orange or reddish pink. The mature size of ‘Roma’ tomato plants is under 4 feet tall and produce nearly all of their fruit at the same time. The tomatoes mature 70 to 80 days after transplanting. (eHow.com)

In the case of the particular tomatoes in my grilled cheese, yes, they were roma tomatoes, as described above, but they were yellow which changes things slightly.

Pink and yellow tomato varieties are often meatier and have less seeds and gel than red tomato varieties. Tomato color depends on the amount of carotene pigments in the flesh and skin. Most tomatoes are high in lycopene, the pigment that makes tomatoes red, while others are high betacarotene, which makes a tomato yellow or orange. (eHow.com)

Tomatoes have definitely grown on me over the years. In a plain salad, I don’t rush to eat them, but in grilled cheeses and other places, they really add a great flavor and texture that isn’t matched by any other fruit/vegetable. Plus, tomato in a grilled cheese is just classic (if also somewhat cliche). Something I have learned at work is to make sure to season the tomatoes with salt/pepper when placing them on a sandwich. It helps bring out the flavor of the tomatoes and adds just the right punch to the grilled cheese.

Iceberg lettuce is typical on any sandwich. However, mixed greens drizzled with balsamic vinegar is not something you typically see on a sandwich let alone a grilled cheese sandwich. The balsamic vinegar adds great flavor and tang while the greens add a nice crunch. Balsamic vinegar has quickly become a favorite ingredient of mine and really should be included more often in general cuisine.

I had no idea what type of bread to pair with my already created grilled cheese. I looked through the breads at Whole Foods and finally decided on organic tuscan. I felt like going with something on the white side, but also something a little different. With this being a round loaf, it provided for a uniquely shaped grilled cheese, while also providing great flavor and crunch.

I was thoroughly impressed with the flavor and texture of the Campo de Montalban cheese. The combination of  cow’s, goat’s and sheep’s milk creates a unique cheese that I will continue to enjoy and definitely recommend to you, the reader. Add in balsamic vinegar, mixed greens and fresh, roma tomatoes on a great tuscan bread and you have a great grilled cheese sandwich.