Let me start off by saying that if you haven’t read the first installment of I Love Grilled Cheese, I would definitely recommend you read it now!

One of the first times I googled “grilled cheese,” I noticed a result for a restaurant specializing in grilled cheese sandwiches: CHEDD’S gourmet grilled cheese. Since CHEDD’S is currently only in Colorado, I of course have never visited, but since they only serve grilled cheese sandwiches, I was intrigued. Once I decided that I was going to create the I Love Grilled Cheese column, I emailed their general email address expecting no one to answer. I was wrong. 100% wrong. Sure, there was a delay since Mr. Jamie Jalazo was traveling, but he responded and said that he was more than willing to answer my questions, which I have included below, in his own words.

I cannot speak for the taste of the food, as I have never tried it, but I can speak for the awesomeness of their employees and for that I would recommend you visit CHEDD’S the next time you are in Colorado or in a future CHEDD’S location.

How long has Chedd’s been open and how long have you personally been in the restaurant business?
Chedd’s Gourmet Grilled Cheese will be celebrating it’s 6th anniversary in May. My business partners and myself have been in the industry for exactly that much time!

Please expand on your love for grilled cheese and how it evolved into a restaurant.
Dirk Bruley and Wendy Bruley (my business partners) originally opened Chedd’s. They both are avid snowboarders and would make lot’s of different types of grilled cheese sandwiches after a day on the slopes here in Colorado. Dirk is from Wisconsin (we only use Wisconsin Cheese) and after some transitions of work, they felt they could make a go at it and just jumped right in and did it. I was a customer early on and got to know them socially. After a while we thought that there were some good synergistic skill sets between us and I became a full business partner. We opened our second store and have now sold two franchises. One in Austin Texas, one in Sioux Falls South Dakota.

Do you believe that most people stereotype the grilled cheese in that they think it is boring and for children?
I think there are some people out there like that, but once someone comes into Chedd’s they quickly realized that it is way more that what it seems. We maintain 35 different cheeses, offer 25 specialty grilled cheese melts, always have tomato bisque and even Strawberry “Cheesecake” Milkshakes!

Have you seen a positive response to your restaurant?
We have seen an unbelievable positive response from people everywhere. We have customers that tell us how they always come to Chedd’s whenever they visit Denver. 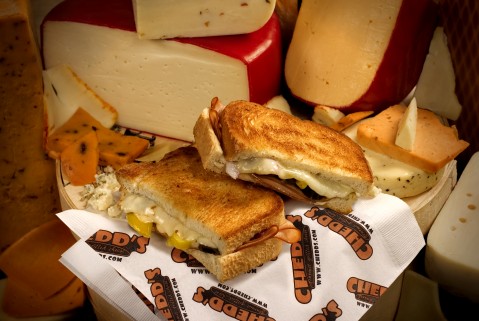 What has been the most popular sandwich and what is your favorite?
Our most popular gourmet grilled cheese melt is the “Hot Gobbler”. It has a Habanero Jack Cheese, Turkey, banana peppers, jalapeno’s, onions, mayo and served on white bread. It is an awesome sandwich and I have included a picture of it for you.

Where does your sandwich inspiration come from?
Dirk is the sandwich genius. He has an incredible ability to make combinations that just work. He comes up with new ones all of the time and they are used as specials at the store. If one really takes off, we sometimes will put it on the official menu.

The restaurants and businesses in Cleveland have been hit hard by the recession/poor economy. Have you and Chedd’s experienced the effects of the downturn?
I have to answer your question in the following manner, people may not be eating out at the big steakhouse as much as they use to, but they still go out to eat. What better comfort food that is not going to break the bank than a gourmet grilled cheese sandwich. Our business has not only not slowed down, we continue to grow.